Does anyone know if hybrid analog-digital volume control is relevant to delta-sigma DACs only?

What about (R2R) multi-bit DACs?

not clear if in the end they did it digital, analogue or in-between but… Metrum has a NOS DAC with volume control:

Thanks. I’ve been doing some reading and it does seem that hybrid volume designs seem to go hand-in-hand with multi-bit modulator delta-sigma designs (ESS Sabre, Meridian, etc.). It would also seem perhaps incompatible and/or unnecessary with NOS ladder DACs, several of which claim excellent linearity at low (digital) input levels.

My understanding of a hybrid analog and digitally controlled attenuator is actually an analog volume control chip that is used after the DAC chip analog output. The analog chip is controlled digitally by the MCU using I2C bus.

Doing volume control in a digital domain (either in software or hardware in the DAC chip) introduces artifacts in the SNR, especially at low level signals. The SDM’s dynamic range is also not fully utilised due to digital attenuation. If DSD is used, it needs to convert to PCM and do the digital attenuation then convert back to DSD. This process obviously negate the good effect of pure DSD conversion. Below is an example of famous Ak4490 DAC, when digital volume is bypassed it sends directly to the switched capacitor circuit which convert to analog signal. 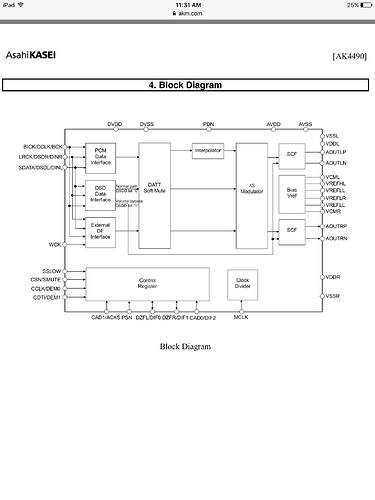 Thanks. Ignoring DSD for the present, I was referring to the technique (used with D-S DACs) where low resolution signals are boosted in the digital domain to present a more full-scale signal to the DAC. An analogue adjustment is therefore needed in conjunction with the digital gain,