I don't get the new 'Versions' tab

Not a problem as much as a question about the behavior of the new Versions tab. Here’s a screenshot: 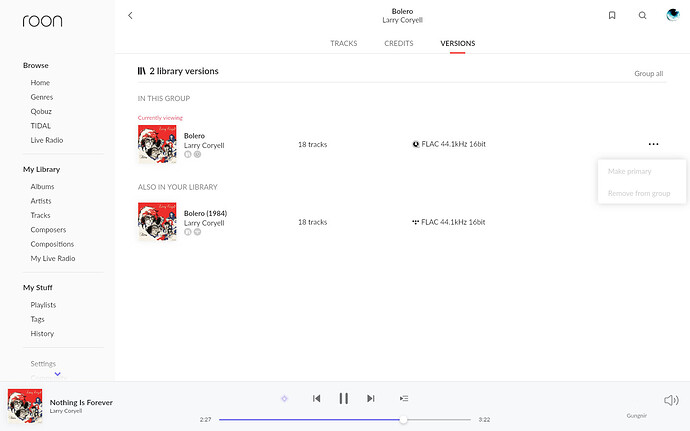 Appreciate any insight, I just don’t get this updated tab! Thanks! 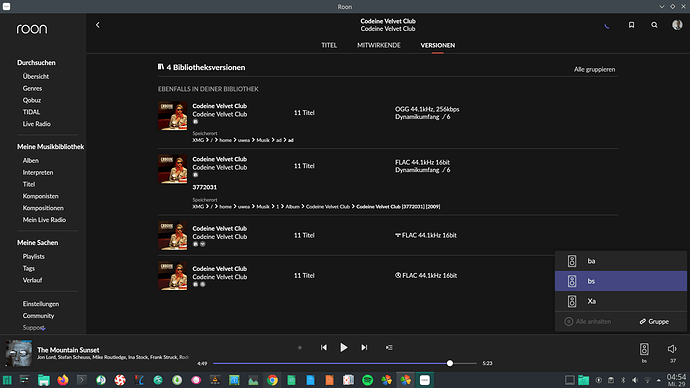 The group below plays only the connected speakers. So I could make a speaker group out of my 3 speakers playing music at the same time.

The album Codeine Velvet Club is 4 times in my library. I have it in a low bitrate (OGG 256kbps for my phone, lossless in Flac, in my Qobuz collection and also in my Tidal collection with my heart (favorites).

Roon plays any album selected and only gives the choice to prefer one with different versions.

FAQ: How does Roon handle multiple versions of the same album?

FAQ: How do I link zones so they play the same thing simultaneously?

If you have more than one zone connected to Roon, you can group them together and play the same music in multiple rooms to get the party going! How To Group Zones Open The Zone Picker To Group Zones, select the zone you're controlling in desktop and...

I am also seeing this strange hierarchical behavior in build 831 and do not understand what it means or what the benefits are.

What is the point of splitting a group of two albums into two groups of 1 album each?! It just amounts to confusing screen clutter plus the functional annoyance of no longer being able to set the primary album because they are now in different groups.

Something looks off to me in @kneville’s screenshots, but let me use this thread (and @tripleCrotchet’s questions) to go a little deeper about some of these broader questions.

First, the simplest way to think about grouping is that it puts you in control of which albums are displayed as you browse your library.

If you have 5 different versions of a given album, they might all be grouped together and you only see the primary version, or they might not be grouped at all in which case you’d see all 5 versions in your library.

All of this is dependent on your visibility settings and to be clear, nothing about how Roon groups albums in your library has changed in our latest release.

As always, Roon will use a few factors to automatically group versions of an album, but this will only happen if the versions in your library have the same number of tracks.

For example, say you have 3 copies of Sgt Pepper in your library:

Roon will automatically group the first two, because they have the same number of tracks.

That means in your library (meaning screens like the Album browser or the Beatles “Albums In Your Library” section) you’ll see two copies of Sgt Pepper – whichever 13 track version you’ve set as “primary” and the 64 track super deluxe version.

None of the above is new or related to the latest release. What has changed is how comprehensive the versions tab is for content in your library.

Now, when viewing either of the 13 track versions you can easily navigate to the 64 track version (and vice versa), and you can “group all” in a single click if you’d prefer to have all versions of Sgt Pepper in your library grouped under your preferred version.

The simple explanation is that these albums aren’t grouped.

In past versions of Roon, neither of these albums would have had a version tab, but the recent changes address this and show you there’s another version somewhere in your library that you may or may not want to group.

The thing I’m not sure about is why the albums in @kneville’s screenshot aren’t grouped – they both have 18 tracks so I would expect that to happen automatically. The album titles are slightly different, but maybe you also manually identified one of them? @support may be able to look into this further but I hope that explains things a little more.

Very much appreciate your response, @mike, thanks! I’ll look more closely at all this with your input in mind and see if it makes more sense, I think it will.

As to your last point, nope, I didn’t manually identify or change anything about the 2 albums. I added the album to my on both streaming services and that’s what the versions tab looked like afterward. My preference would be for only 1 version of that album to be visible and for it to be the Qobuz version, which I thought I could accomplish by selecting it as the primary. I’m not in front of my library right now so I don’t know if I manually grouped these alternate versions or not or if that would make a difference. I’ll have another look at that specific album in a couple of hours and report back.

Thanks again for your help, much appreciated! Cheers!

The two albums have different titles “Bolero” and “Bolero (1984)” so roon doesn’t automatically group them. You need to do that manually.

You can do that manually from the same page although it is obviously not at all intuitive if you don’t know what the sectioning on the screen means (I didn’t before Mike’s explanation). So you can highlight both albums and then 3 dots → edit → group alternative versions.

Update - I hadn’t grouped the alternate versions. Roon knew they were the same album, but since the titles were different, as @tripleCrotchet pointed out, Roon didn’t do it automatically. I selected them both and grouped them as alternate versions and now I can choose one or the other as primary.

So some of that might have just been me not realizing I hadn’t grouped them, and not noticing the different titles. The explanation from @mike was helpful in any case and I think I explained the odd behavior he thought he might be seeing. Cheers!