But here is the problem as best I can explain it. I am trying to listen to an album in 24/192, I’ll upload a picture of which album I am listening to now, but this happens frequently. I will start playback by clicking the play now button, my computer will begin streaming/downloading the song and playing. now normally it will download all of the second song as well so that it stays a song ahead, however lately it has been only downloading a bit of the second song. Roon will get to that point and stop and skip ahead to the next song, and the process repeats again and again on every other song. If I manually start playback on the partially skipped track, that track plays fine, but the next does not. Is there a setting I need to set that will eliminate this? 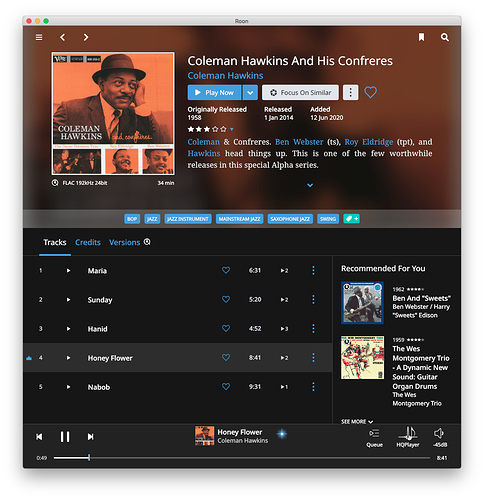 I’ve moved your post to the Support category of the forum, where it will be seen, and responded to, by the Support team. It sounds to me like a networking issue, therefore it would be helpful to them if you described your network setup, as well as details of your computer and Roon remotes.

My network setup is Xfinity internet into a Ubiquiti Dream Machine Pro, to a Switch that connects to various access points and hard wired ethernet connections such as the one to my Roon Core on a 2011 Mac mini, which is also hard wired to my Signature Rendu SE Optical, etc…

My remotes are iPad/iPhone or my MacBook Pro, which I am using right now.

This only happens on 24/192 streams, not local files or lower bit rate files.

Audirvana+ plays the same 24/192 files from Qobuz just fine on the same computer as my core.

This generally indicates some kind of network issue; a poor internet connection or lower than normal speeds.

Have you run a speed test on your internet line recently? That would be my first port of call.

SO can we stop trying to blame my network?

Roon seems particularly sensitive to network issues. Every single time this has happened to me it has been down to connection speed.

Likewise, direct from Qobuz and Tidal works just fine but Roon plays a few seconds and skips to the next track. Every time I have traced it back to connection issues; either poor WiFi to the endpoint or more recently, I did a speed check and realised I did indeed have a major fault with my isp.

The other thing to bear in mind is that when diagnosing problems, particularly via a forum is that it’s best to rule out the obvious. What harm is there in running a quick speed test just to rule it out? 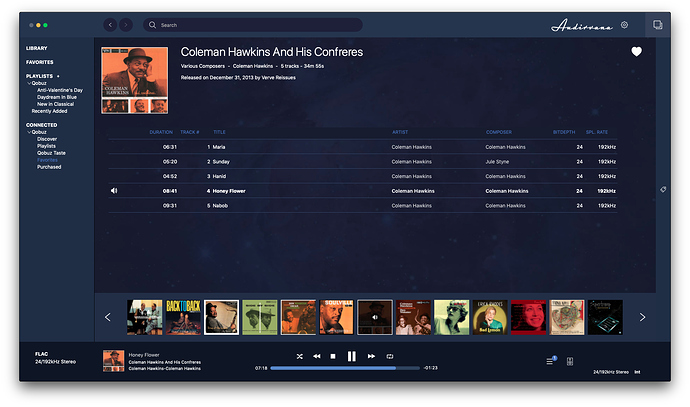 There are many ways of streaming tracks from a remote server. Not all are equally sensitive to different networking issues. In addition, network issues come and go, so we cannot assume that what glitched when using app A will also glitch when using app B to compare. Knowing what I know about Xfiniti, I would not assume that they are doing their job perfectly. In particular, I’ve experienced intermittent issues with them that affected Roon especially badly, which they kept ignoring until I went public with it on Twitter. That’s why I have now dual ISPs (Xfiniti and Sonic.net) coming into my Ubiquiti router…

If two separate players attempt to play the same song, from the same service, on the same network, and the same computer, at close to the same time, within a minute, and one has problems, and one doesn’t, then what do you deduce?

Second, I can look at my network stats in real time with the Unifi App.

edit: Furthermore, this never happens with Audirvana. NEVER. That also means the problem is not my network.

The problem is Roon, and it is probably a caching problem.

The Unifi app does not show you want you need to know. When I had problems with Xfiniti, I could only see them on cable modem logs, which I was able to get because in desperation I replaced the Xfiniti-provided modem by one from Motorola that I could get detailed information from.

You seem to be assuming that Roon and other apps pull data from Qobuz servers in exactly the same way. That’s not likely, there are many ways of moving the bits. Evidence elsewhere suggests that Roon pulls whole tracks in one go, which may trigger some issue with the network. IMO that’s not a Roon bug, but the reality is that so many of the networking we are dealing with is partially broken, that Roon may for peace of mind implement backoff methods to handle flaky networking.

In my case, since Xfiniti finally fixed the intermittent fault on their circuits and I added a backup ISP, last year, I stream Qobuz with zero issues.

Again… if the problem were with my network or Xfinity then ALL players would exhibit the same problem and the problem would manifest with ALL bit rates.

Until recently, I also streamed Qobuz at all bit rates with no problems. The problem has begun recently, I have not been suffering through this problem for years and years until finally becoming fed up and posting about it.

So far, the only thing this thread is proving is that Roon should not get any more of my money…

Perhaps Roon should Contact Damien at Audirvana and ask him how to properly stream music. Audirvana ALSO downloads the entire song in one go, and then, just like Roon, it downloads the next song so that it is, ALSO, a song ahead. AND, it works perfectly.

and lastly, if there are many different ways to get the bits, then maybe Roon should find one that works and stop blaming my network.

Again… if the problem were with my network or Xfinity then ALL players would exhibit the same problem and the problem would manifest with ALL bit rates.

Not really (I’ve been pretty close to networking professionally since before TCP/IP) but I’m done here.

So, I did some more tests and it looks even more so to be a caching issue with Roon.

I played the Bob Dylan album, at 24/192 pictured below, and it played perfectly. The first two songs are 6:59 long. Then I immediately played the Ben Webster album, at 24/192, the first two songs are 15:20 long and the second song stopped again, and Roon skipped to the 3rd song. Then, I immediately went back to the Dylan album and it is playing right now with no problems. Clearly there is some limit of data Roon is running into thats not allowing it to continue to download all the data it needs to continue playing in some scenarios.

Unless, of course, you think Xfinity is discriminating against songs of a certain length… 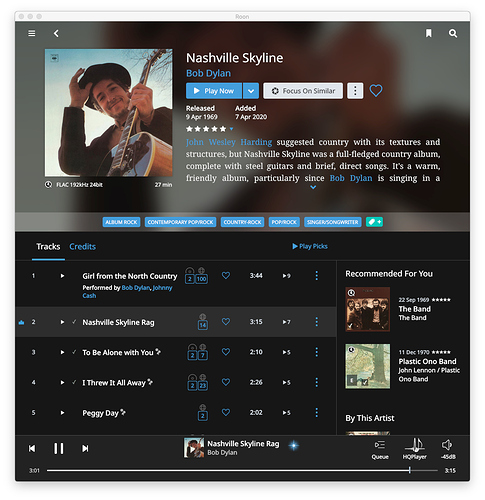 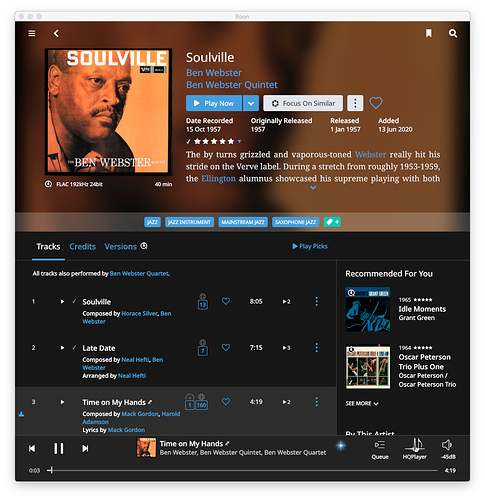 Clearly there is some limit of data Roon is running into thats not allowing it to continue to download all the data it needs to continue playing in some scenarios.

Unless, of course, you think Xfinity is discriminating against songs of a certain length…

Quite possible. Roon burst-downloads a big chunk of/the whole track from Qobuz ahead of playing it. Some ISP configurations play silly games with rate limiting and caching. Longer tracks could be hitting some hidden limit. Other apps, unlike Roon, may download tracks in smaller chunks as they are played and luckily avoid those limits. There are a couple of other recent threads where this has come up in different forms; in one case, the ISP (not Xfiniti) fixed the issue. Roon is likely not doing anything “wrong” in terms of TCP/IP, but US ISPs like Xfiniti do very sneaky tricks for congestion control that assume certain use patterns that may not match Roon.

At the risk of repeating myself when this has happened to me (and it has a few times) both the normal Tidal app and the normal Qobuz app worked fine whereas Roon did not. However each time it was a network issue.

So no, just because another music app is working fine it does not mean it’s not a network problem. Whether Roon should be quite so sensitive to connection issues is another matter but it is.

Bear in mind also that Roon is more sensitive to network capacity as it streams from the source to the core and then out to the endpoint.

While waiting on support… you can pull the logs off Roon
https://kb.roonlabs.com/Logs

It may give you some direction on trying to fix this. I have no idea what to do next other than reading the logs.

Did you read my reply above where I outlined this?

Thanks, I did that with the help of the link you provided. I don’t know what I am looking for but I’ll give it a shot.