I had backup problems this week

I had backup problems this week.

I backup weekly (saving the last 10) to my NAS but to be extra safe I ran a “backup now” prior to installing the new OS and saved it on my NAS . It was a full backup of 6GB in a different folder to the scheduled backups.

I restored from the “backup now” but it was corrupted in some way. It kept saying that storage locations were unavailable and wouldn’t show my Qobuz albums either. I tried twice after totally removing Roon Server etc. It failed both times.

I then reinstalled Roon and restored from the scheduled backups. It worked first time. I made no other changes.

Mint 20 is good until 2025 for support thankfully. I don’t want to go through that again…

I had backup problems this week.

You should really report this to @support.

There are several problems with Backup and the more instances of problems, then the more attention that will be paid to Backup logic.

Can you send us the backup that didn’t work? You can zip the backups folder and send it to us here: https://workdrive.zohoexternal.com/external/5dHjIc9gIin-LVTzf

@dylan Unfortunately I can’t. I deleted the folder when I managed to restore from the scheduled backup.

Since getting up and running again, the spinning circle has been going constantly but gives the message below when clicked. Is this normal? 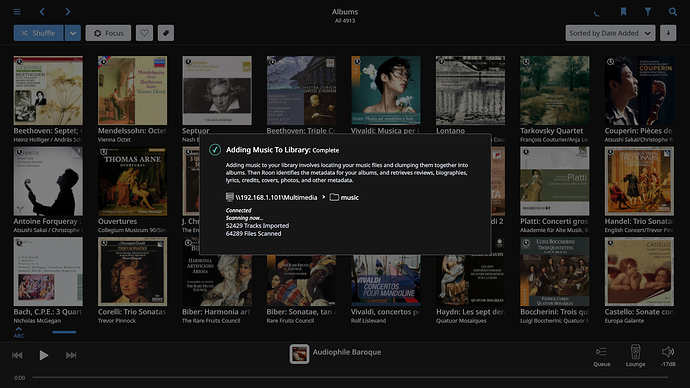 Hi everyone, I just wanted to provide an update here — Our team has been investigating this and has reproduced this issue in-house on some variants (while others are working okay). We are currently continuing our investigation and working on a solution with the development team. I can’t provide any timelines just yet, but I can assure everyone that this is a high priority issue for us and our team is working to get this resolved ASAP. We believe that the OS / kernel version is playing into thi…

That fixed the spinning circle. I installed a newer kernel. Thanks.