In looking at the signal path for my music, something seems to be missing now and I can’t figure out why. I’ve restarted my core device, the streamer and the iPad I’m not sure what else to try. 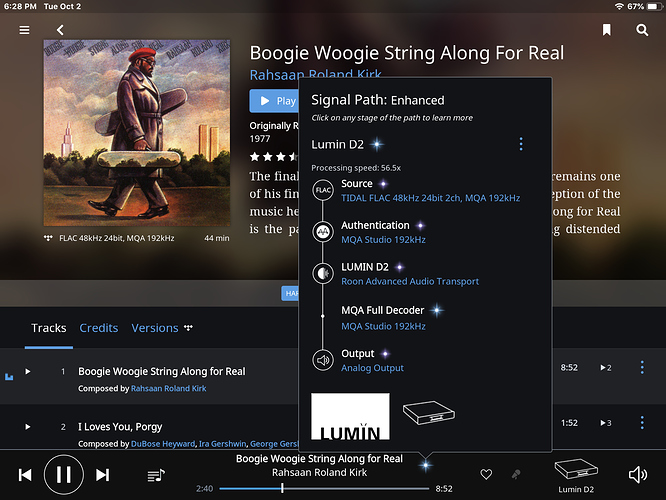 Looks fine to me. It authenticates as MQA then you get a full decode. The only other option would be to do the first unfold in Roon (set the device capability to renderer only) and leave the Lumin to do the second stage. It would look different on the signal path but the result would be the same to all intents and purposes.

I was thinking that something should be showing beside ‘MQA Full Decoder’ the way it is with the other things in the signal path.

Do you think the other option you described would result in even better sound?

Roon never does the full decode. The DAC always does the last unfold.

Sorry Scott, but I don’t know enough about digital streaming to know which post you’re addressing.

Your current signal path is correct and is the expected default.

You may experiment with setting MQA Capabilities to “Renderer Only” for Lumin D2 and see if it sounds any different. This will result in an alternate signal path with Roon doing the MQA Core decoding (first unfold) instead of Lumin D2. The MQA Core decoding should be the same with the same intermediate digital output, but there is a difference in where the processing is done.

I’ll try changing the setting to Renderer Only like you and Henry have suggested and see which setting sounds better to me.

Yes Scott, it could be misunderstood in isolation but I think it made sense together with the screen shot.

Steve, my post may have been a touch confusing but your final post suggests you understood just fine.