I think what is broken when

I know, after many experiments, I feel that the core of this new version must be placed in a computer without other application software. Because if you operate other things on this computer, the playing music will be continuously interrupted.

Dedicating a machine to Core is rarely a bad idea, but it should not be required. I imagine results depend on a number of factors:

Perhaps share some of these details for your situation. In my case, I’m using a 7th gen Intel i5 with 16 GB of RAM, NVMe storage, and 1 Gbps wired Ethernet running Windows 10 Pro and Roon Server. I’ve had no issues with music interruptions under v1.8 due to other workloads on that computer. That said, I don’t do a ton of other things on this system. I do use it for loading media onto our Synology NAS, for editing track metadata, etc.

the playing music will be continuously interrupted.

If the computer is not efficient enough.

after many experiments, I feel that the core of this new version must be placed in a computer without other application software. Because if you operate other things on this computer, the playing music will be continuously interrupted.

200% agree, I think this new version is much to sensitive to external conditions (CPU load even if not high, networking delays, …) and it is not fail safe (loses endpoints and other audio devices, and quite often even disconnect remotes from Core).

As @David_Snyder writes this should not be required

If the computer is not efficient enough.

This is not the best approach, there are other ways to improve performance than throwing computer resources/performance.

This brings back memories of what was a hot topic in real time operating systems and applications conferences in the early days of smart phones (early 2000s) … Too many time the telephone communication would be cut off by running other apps at the same time, many were stating that the CPUs coudl not handle it, whereas RT/Control experts were showing that little coding improvements made huge impact in users experience.

just a suggestion for @brian that he might look into: If the Roon SW engineers would review their architecture, desing and coding with real time experts and control engineers … for better managing available resources and provide a smoother user experience.

there are other ways to improve performance than throwing computer resources/performance.

Yes, but in my informal testing of Roon v1.8, it’s resource usage has been more CPU-friendly than its predecessor. In addition to the 7th gen i5 system that I use most of the time for Core, I have a 10+ year old netbook PC that I use for testing Roon Server on Linux. This is a seriously underpowered system, but under v1.8, it’s able to sustain higher playback rates with more DSP than it could under v1.7 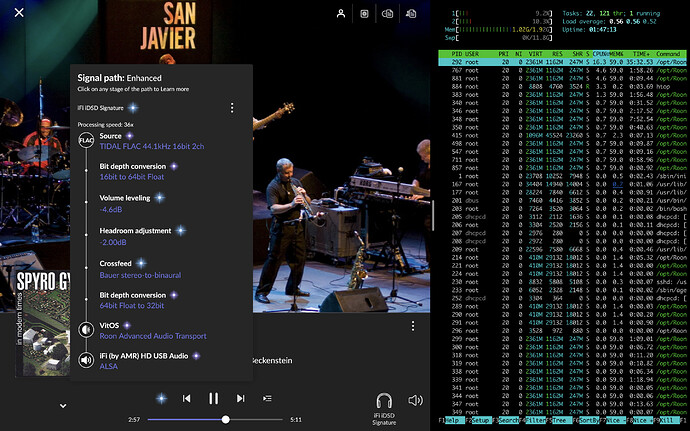 I’m actually really impressed. I have noticed that v1.8 is a little more sensitive to v1.7 when grouping zones, but I’ve not had any Outputs or Controls disconnect from either Core so far.

Thanks for those details, but you did not mention what software you are using for running Core…the desktop app or Roon Server? Also, I’m not sure what “300 M” means for networking. Is this Wi-Fi?

That’s probably because you are using System Output Rather than Core Audio. The former goes through the system mixer and includes sounds from other apps. The other setting gives Roon exclusive use of the sound system.

300M is the network fiber speed. I am a new customer using ROON for the first time this month. There are also many reasons for not understanding.
My computer system IOS, music TIDAII, my English is not good, and I don’t write much.

Could you please clarify? This is what I understood:

Not sure about you, but Roon on macOS has been just short of a disaster for me, frequently causing the CPU (and fans) to spin out of control. This has been less of an issue with v1.8, but performance of Roon is still pretty poor on macOS relative to Linux and Windows.

Where did you read that macOS is the best?

where is your music stored?

how is your Mac connected to the router? Wifi or cable connection.

are you trying to upsample perhaps too?

maybe you can share a screen shot of your signal path while playing too.

you should also perhaps open a #support thread with more details as will be requested when you open a new thread.

I don’t quite understand what you said, my music is provided by TABAL subscription, and I have a wired connection to the router network.

I think it depends more on the performance of the Core than whether other processes are running. I run Core on a rack mount server (Ubuntu Server 20.04 LTS) that runs a bunch of other stuff, e.g., SFTP backup for everyone in the house. I never had a dropout issue even when multiple hi-res streams are playing simultaneously to several different devices.

I’m not it’s a bad idea If everyone had to buy a Nucleus, there certainly would be less problems, less maintenance and Roon gets more money. And maybe the price of the Nucleus goes down.