Last week, I built a fanless Roon Rock core by pulling the motherboard out of an Intel i7 NUC (NUC10i7FNH1) and putting it in an HDPlex case, removing the fan, and installing the heatsink (photos attached). I loaded it with a 500gb M2, 2TB SSD, 32GB RAM (single chip). Transferring my library over the network was easy and it works great with no issues.

Any help is appreciated,
Daniel 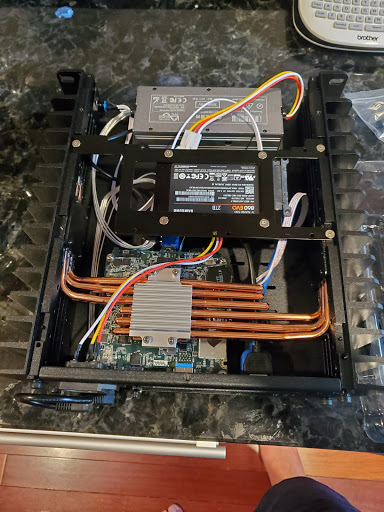 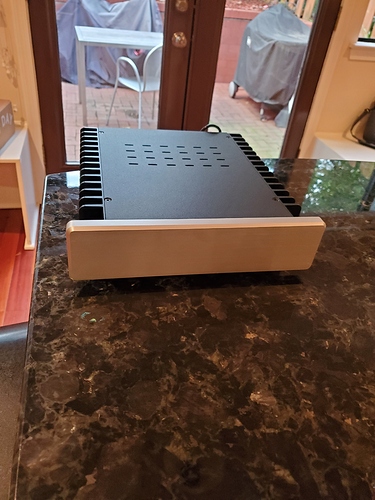 I plan to do this for a few hours and then check the CPU temperature on the BIOS (which requires rebooting the Core). Is there any better way to do this and test the temperature?

In the past when I was testing for overclock stability I ran it for no less than 24 hours, then followed by other GPU tests (not relevant for Roon).

After you’re satisfied with your hardware configuration, then you can install ROCK.

Thank you. I wish I had done that before I subbed out my Core and got this up and running but it would be no sweat to swap back for a while and do some hardware stress testing with a real OS. I had never heard of Prime95 so that is helpful.

You might be able to do it from a live boot USB stick and keep the OS.

How to Fix: Bootable Prime95 to Stress Test Hardware

Infopackets Reader Peter M. writes: " Dear Dennis, I have a very strange issue. I recently put together a new computer build and installed Windows 10. Everything was working fine for the past month or so, then all the sudden, Windows 10 won't boot...

You can stress it easily enough if you have DSD capable endpoints. Upsample to the highest DSD rate allowed. Put it on repeat and walk away. The CPU usage is slightly misleading because it doesn’t give a representation of all cores, just those involved in playback. Look at the signal path to see that CPU measure. The closer to 1 it is, the harder you are pushing it.

So I vividly remember seeing the CPU usage on the signal path in the past. Now it is not there. How do I get it back? I looked on both my android and Mac OS remotes?

Unfortunately none of my endpoints are DSD capable (I am using Coaxial digital outputs to 192/24 max DACs). It is a good thought.

i would suggest you like killdozer and run a bootable USB with Prime 95 and use the small FFT testing.
This will bring you CPU 100%. Also use Rufus to make the USB bootable

While at it why not make another bootable USB with Memtest 86+ to check your memory and let it run at least 6 hours. On the web page you have an auto installer for USB (bootable) with Memtest86+.

What about going old school ? This is not meant to be condescending, I’m actually going through the exact same build as you. You’re a bit ahead of me, I’m still deciding if I’m committed to the NUC, before moving it to the same HDPlex already in hand.

Even though this won’t give you the inner core temp, it will highlight problems, and whether you installed heatsink and pad/paste correctly.

That is not at all condescending as it is an idea that I never thought of. I am an attorney, not an IT guy, so I have been doing all of this to occupy a different part of my brain.

The NUC/HDPlex project was fun to do. Let me know if you have any questions about how I did mine.

I’m not been condescending either, I am an IT guy and I’d use this to check CPU temps. It’s difficult to do those kind of physical measurements in the hotspots while running.

But can you install apps on ROCK ? I thought it’s lock down tight.

I’m not a rock user and am unsure but think it’s worth a go. Given it’s a NUC at heart I thought a live USB boot may bypass ROCK if it gets picked up as a boot device by the BIOS.

What about going old school ?

When the hardware has built-in temperature sensor, it’s much better to use that instead (using software to read it).

I’ve tried my share of “exotic” PC cooling systems, usually in search of quiet. These have involved dedicated sensor hardware which has proved near universally useless and misleading. I’ve had the burns to prove it on occasion. The built in sensors are the only ones that matter, it’s also worth establishing they work.

I was able to run Ubuntu from a USB drive, install the HDDtemp and lm-sensors packages, and run them. The five cores are between 35 and 37 degrees Celsius, the 2TB SSD drive is 33 degrees, and the M2 drive two sensors show 40/43.

But how is this useful if I am not in the process of driving my CPU full throttle? Does this tell me anything more than the BIOS tells me? Wouldn’t I be better off testing the hardware with something like Prime 95?

You are right I was able to run Ubuntu directly from the USB stick without disturbing the Rock install. But I cannot run Rock simultaneously, so all I can do is check the sensors while the CPU is at idle, which seems to be the same as what BIOS tells me (though I get more sensors for sure).