As we all, I assume, build up our collections of our vinyl rips it would be very useful to be able to easily visually identify these rips and to be able to differentiate these from CD Rips.

Add a tag to it called ‘Vinyl’.

How are you tagging your vinyl rips to begin with? Is there a “standard” ID3 tag used to indicate the file is a vinyl rip?

Any text you add in these brackets as part of the folder name will appear on the album cover in browser view [Vinyl] .

I also added “Vinyl Rip” to the album tag to distinguish it, but I’d be happy if the Vinyl icon was installed. 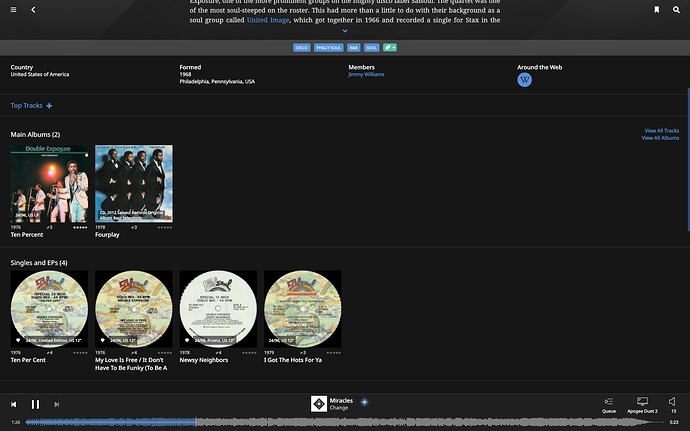 This request links in to others that have been made, including by me, to have Roon record the source of an album. The source or lineage of an album in Roon is important.

Source is of course different to sample rate/bitrate. Examples of source would include CD, web (i.e. web release, not meaning downloaded from the web), vinyl, cassette, reel, etc. Yes you can add it via a tag, or even type it under the album version metadata, but a dedicated metadata field for source would be a superior solution. I currently add it under album version, though this field often becomes somewhat long due to the other version information entered there. This thread touches upon similar themes:

I would like to request that album format marker on browser for 16/44.1 resolution be numerical (some form of 16/44), analogous to the current marker for 24/96 etc. Album format should reflect resolution, not medium. The current marker (CD) reflects medium, and it always misleads me into thinking that the album is one of my CD imports. Moreover, 16/44 is no longer just CD resolution; it is also the majority of Tidal albums.