ICYMI: So Feb 14th is the date Qobuz goes live in the USA

I’ve seen a couple of posts on the interweb today saying Feb 14th is the date Qobuz will go live in the US. Here’s just the latest from Auralic:

The internet is reporting that tomorrow —Feb 14 — is the official US launch of Qobuz. What will change? A more complete library?

I am leaning toward dropping Tidal because the high resolution offerings on Q sound really, really good. More choices would be better!

A library comparable to Tidal, functioning CarPlay support, and a family plan like Tidal has are what it will take for me to switch.

All I need is a larger library. Hope we both get what we want.

Believe me, I know. I tried Qobuz almost exclusively to see if it had better Carplay functionality. Unfortunately, it does not.

Tidal’s “family plan” is a joke. Having to be offline while another user is streaming live, is not a family plan, it’s a shared account. A true family plan is like the one that Google Play Music offers. I don’t have it now, but when I did, everyone in my family could be online anywhere and stream what they wanted when they wanted.

I find CarPlay to be pretty poor generally especially because I was using Android Auto before. 3rd party apps are well designed, actually work and have a more sophisticated yet still simple design. Car Play is chunky, mostly ugly and it takes so so so many tries to get music to work. The best method I have is to start playing in the app on the phone after it’s plugged in. Sound quality is at least good over the cable.

Though in our other car I just added the Radsone | EarStudio and can stream in AptX HD over bluetooth (or LDAC if your device uses it. I’m using my Astell&Kern instead for tunes now. Much superior on every level though no car interface visually.

I’ve never hit the type of limit/warning you mention here. Me, my wife, and a friend (all on our family plan) I know listens to music a lot have, I’m sure, been using Tidal (with our own individual accounts) at the same time.

The only time I’ve gotten any warning like this is when I’m literally using the same account in two places.

I must be doing something wrong. I’ve frequently gotten alerts that about another user. I can’t remember the dialog. I need to poke at this. Thanks for the info.

College discount is Tidals ace in the hole for me. $9.99 for hires is hard to beat. #nevergraduate #communitycollegerules

Now if qobuz has something in the works along these lines I might drop tidal …but for the short term i can deal with balancing the two.

@jtnt Oh - maybe it’s because Roon is using my Tidal account? I hadn’t thought about that. Are you using the same family member for your personal use and in your Roon “Services”?

Still says “beta” when I login…

That would do it, I think. I use my account for both Tidal login and Roon services, so the libraries match up in both places. [insert feature request for separate Roon profile / Tidal account functionality]

The day is still young 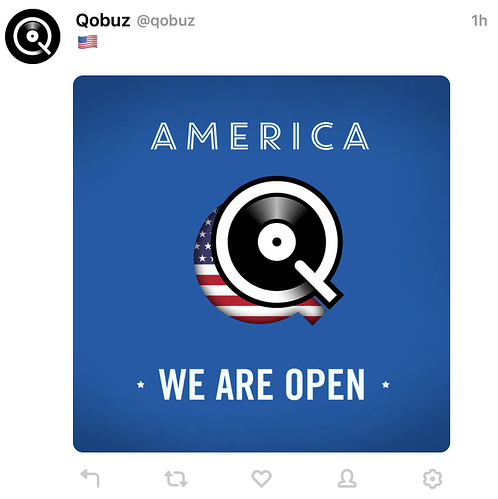 Anyone seen evidence yet of an expanded catalog? I chose a few popular artists who had much of their discography on Qobuz with the exception of a few albums (i.e. Joni Mitchell, Nine Inch Nails), figuring they would be most likely to show up…nothing yet.

Based on information posted by Qobuz representatives in the Audiophile Style forums, the only significance about today’s rollout is that Qobuz US is now available to all US residents. It is, however, still in ‘beta’, just not a closed beta like it had been up to this point. No significant dump of new titles has occurred, but the catalog is being expanded daily. The following lifted from a post by Qobuz this morning on an AS thread:

“Catalog﻿ is not a factor in the beta designation…there are some improvements to the apps that we want to make happen before we eliminate it… We are in the process of ingesting over 14 milli﻿on more independent label tracks but it could take a few months to get them all live on the service.”

Thanks for that. From that description, sounds like most of the big label stuff that they will have access to should already be on there, and it’s just the little guys that they’ve yet to finish.