Identifying compositions : clarifications on the process used for unidentified albums

Hi,
I have questions on how exactly Roon 1.3 identifies “compositions” on classical music albums managed as “unidentified”. I have an album which Roon cannot correctly identify (CD 37 of Tafelmusik: The Complete Sony Recordings).

The album groups Mozart German Dances, collected under 5 different K numbers in the Mozart catalog. The following image shows the “Album”, “Track #” and “Track Title” metadata for tracks 1-28, taken from Mediamonkey, which I use to manage my library. Note that tracks 1-24 titles all start with string "Mozart 6 Deutsche Tänze, ", while they belong to different K numbers (tracks 1-6 to K.509, tracks 1-5 to K.536, etc). 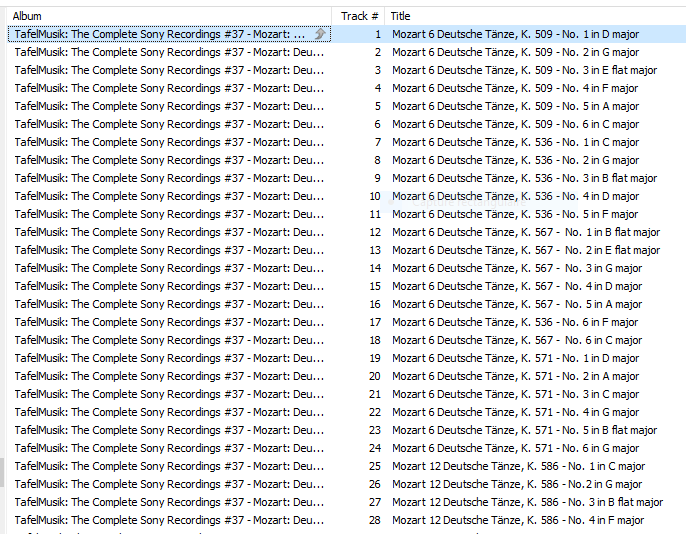 Tafelmusik 37 - Track Titles - Before.PNG686×534 42.7 KB
.
When the album is loaded in Roon 1.3 as an unidentified album (where only local metadata should prevail), I get the following almum display. Note how tracks 1-24 are grouped under the same composition “Mozart= 6 Deutsche Tänze, K”, ignoring their belonging to 3 different K numbers. 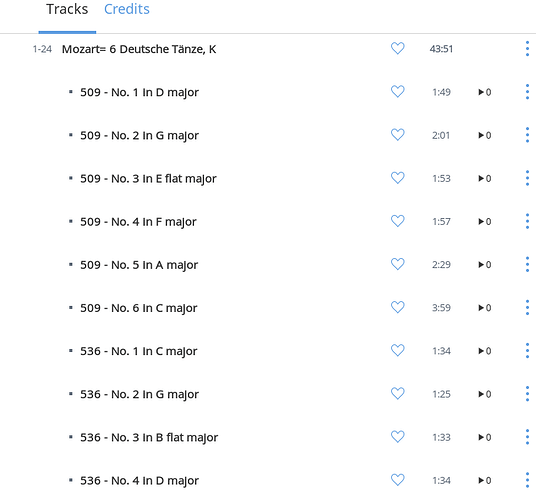 Tafelmusik 37 - Roon.PNG696×649 34.9 KB
Trying to understand why Roon lumps all those tracks under the same composition where they should be seen as different compositions, I edited the title tags by adding an extra space after “Mozart 6”, to differentiate the groups of tracks belonging to different K numbers. Now Roon displays the album contents as follows, correctly identifying the different compositions. 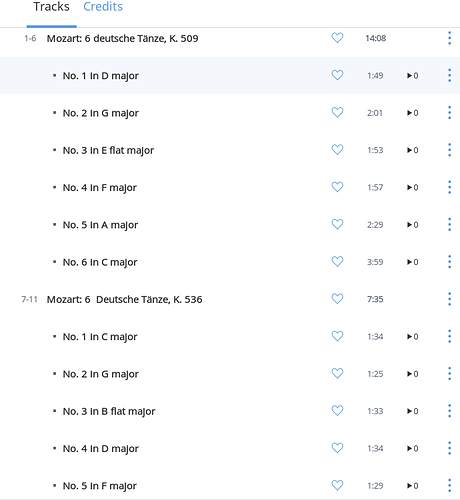 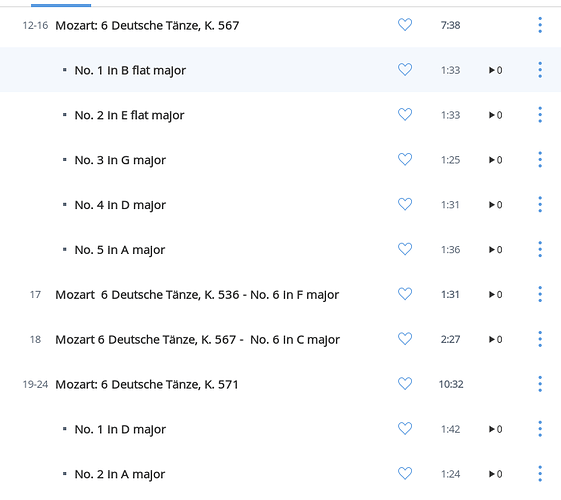 (In case you ask why I did not try the “identified” version of the album : the compositions are even more badly defined in this case).

Could a Roon developper have a look into this ? Being aware that identifying composition names for track metadata can become a thorny issue, it would be helpful to at least better understand how Roon goes about this and what rules are used in the process. I have seen that Roon 1.3 offers a “Composition editor”, but it does not allow addition or removal of tracks from a composition. Maybe I have missed something here : is there a way to edit a composition contents ? I am also curious about the “:” and the “=” characters appearing at the right of “Mozart” in the composition names extracted by Roon, since they do not appear at all in the tracks title tags. Is Roon trying here to implement a common naming convention ?

There is some automatic grouping by common prefix–but as you’ve noticed it’s not always perfect.

You can exercise absolute control by annotating the files with WORK and PART tags, as described here.

@joel, one of our developers, is responsible for both this splitting algorithm and that document, so he might be better equipped to get into finer details with you–perhaps there is a clear way to improve the algorithm based on some of these examples. Often these things are tricky–make it too accommodating in one direction, and you start grouping other things incorrectly.

@brian Thanks for this prompt reply. Using WORK and PART tags indeed solved the issue. However, I found that assigning only WORK tags to the album tracks (with no PART tags) do not correct the problem, in fact this makes it worst. Surprisingly, all the album tracks are now lumped into one big composition. If a PART tag is assigned on just one track of the album, then the WORK tags will do their jobs, and the album compositions will show up. I think this is a bug.

I don’t think we envisioned using these separately

I’ll make a note to take a look at this case and see what can be improved.