If not the Allo USBridge then what?

Hi- I’ve seen a few threads where this question was raised, but I didn’t see any answers beyond HAT’s for S/PDIF or Digital Coax. Has anyone found an audio grade HAT that outputs USB? I’ve got a few DAC’s that have USB inputs. I am currently using microRendu’s, but if there’s something out there that costs a bit less, I’d be interested.

I’m sure there’s going to be a number of you that are going to respond that the USB output of a Rpi should be just fine, and it may be, but that’s not what I am after.

Thanks in advance,
Vince

Why not the USBridge then?
Other than that there are not many “cheap” options…
I use a second hand SOtM sMS-200 as well as the USBridge and today (current firmware/software) i think they sound about the same.

SOtM has got a few other options though, such as USB-addon cards for desktops etc.

Why not the USBridge then?

Antiquated Linux that doesn’t allow Ropieee to be installed, and the associated uncomfortable feeling of buying something that won’t be supported by the manufacturer.

Those are valid reasons, however a bit off target in my mind.

I mean, the Allo product is Sparky and the USBridge, what you decide to load up on it is beyond the support scope IMO.

That said, I think we are all buying into the things that “won’t be supported by the manufacturer” as long as we don’t pay MSB/dCS/Lumin/Aurender money. (if even that helps)

You can use this device:

You can load it with Debian + NAA or with an image from Signalyst web if you use HQPlayer or Debian + Roon Bridge if you use RAAT.

Its a little bit more expensive than the USBridge, but just a few bucks.

I mean, the Allo product is Sparky and the USBridge, what you decide to load up on it is beyond the support scope IMO.

I’d consider it reasonable to expect a system that’s current as of sale date. In all fairness, it isn’t entirely @allo.com 's fault, but in the case of the Sparky, the latest that’ll load is older than the release of the device if I’m not mistaken (kernel 3.10.38 was released in 2014, the latest release of the 3.10.x series is late 2017). There’s obviously been work and patches and everything since then, and that’s both commendable and great, don’t get me wrong here.

That said, I think we are all buying into the things that “won’t be supported by the manufacturer” as long as we don’t pay MSB/dCS/Lumin/Aurender money. (if even that helps)

And that needs to change. The repeated issues users are having with Cambridge devices are a disgrace.

Why not the USBridge then?

I’m fed up with it myself. I have not used it in months, hoping with time things in the OS would get better. I just revived it; burnt the most recent Allo DietPi image and updated. I have a number of dacs that are capable of 192k. But with the USBridge, Roon’s Max bitrate is STILL just 96K with all of them. Yes, i have it configure to use USB-DAC-1.1 selected. Want to buy it?

Thx Steve, but i already have one!

Try the non-GUI version of DietPi? I have had had that on my USBridge since day two.
Working perfectly with all resolutions my DACs can handle! (32/384 and DSD128)
Yes, it sounds really good too, on par with my sMS-200 or very near.

I agree the USBridge was not for me either too temperamental with my DAC at the time, would drop off for now reason and I had one that just died. Add in the XMOS bug and it made it even more annoying ( not it’s fault i know) . It’s long gone as is usb for me.

While the USBridge isn’t as reliable as I would like it to be, there aren’t many USB transports for that price point and sound quality that offer the same flexibility. You just have to make sure you DAC is compatible and it should be fine.

The only other options that your are looking at are Pi, Sotm, tinkerboard, odroid, nuc. But I doubt you will get the same support from tinkerboard and odroid.

I run USBridge > Topping D50 and it’s great. Slight bug with the bridge needing a reset because it disappears from the device list but otherwise works great and sounds great

Huh, just got into this conversation, and it’s discouraging.
I have not been into DIY stuff.
I use a MicroRendu (plus Meridian and direct USB connection), but I’m setting up more low-cost listening stations and was interested in Allo.
But these posts confirm all my prejudices…

I decided to experiment with an USBridge in my office feeding a Chord Mojo which in turn feeds the AUX inputs to my Marantz 3300.

If I turn off the Mojo the USBridge doesn’t see the Mojo about 50% of the time when I power up the Mojo. In order to get it to work I have to power cycle the USBridge while the Mojo is on. I am currently leaving the Mojo and the USBridge on 24x7.

I personally don’t think that the USBridge sounds as good as the microrendu on the TA-ZH1ES, but I can’t tell the difference between the microrendu and the USBridge with the Mojo. This could also be attributed to the “closer” listening via my Sony MDR-Z1R headphones vs the Harbeth’s in my office. I suppose I should try headphones on my office rig.

All this aside, the USBridge is quite good and the price is really reasonable. I just wish it was more stable. I am surprised that there isn’t more competition in this space. It seems to me a Kickstarter in the making.

Maybe instead of another Nucleus, Roon should make some reasonably priced endpoints. I bet they would be far more profitable than the Nucleus.

@AndersVinberg - I think you should try the USBridge. If you have the same experience as I did with my TA-ZH1ES, you will be pretty satisfied. Unfortunately, there’s no way to tell without trying.

Well, let my just tell you about my experience then?
My patience couldn’t handle the experience of the UsBridge as delivered, with the Allo GUI.
I flashed the internal eMMc with the latest DietPi after a couple of days and since then my USBridge has been 100% stable.
I only run Roon Bridge on it (and previously NetData, a performance monitoring suite)

Today i find it equal to the SOtM sMS-200 on sound quality, but i hate every moment when i need to go the GUI of the sMS. Much prefer the SSH-interface of DietPi.

I just finished trying headphones on my USBridge and Mojo rig. I did as above and swapped in a microrendu as well. There’s definitely a difference, not huge, but the microrendu does sound better. Now I want to try an ultrarendu.

For casual listening in a workshop, office, or background music in a kitchen, the USBridge is a really great bargain.

I forgot to mention earlier that I have been using a DSD128 of Bill Evans “Some Other Time: The Lost Sessions from the Black Forest”. It’s my reference music when I am trying to hear the difference between changes with my gear. I also don’t have any Roon DSP enabled while I am testing.

I switched from USBridge to rPi 3B+ with Ropieee, and couldn’t be happier! Ropieee is regularly updated with the latest Linux kernel that has the latest DACs supported. The USBbridge is stuck at an ancient kernel that looks like it may never get updated, so will never support DSD and HID on the latest DACs. The USBridge was unable to reliably power my Topping D10 off it’s “special” port, the rPi has no trouble.

Review of Pro-ject Stream S2 Ultra coming soon on Darko. £599, which may rule it out with regards to this post. Worth a look though.

Are you referring to Native DSD or over DoP? 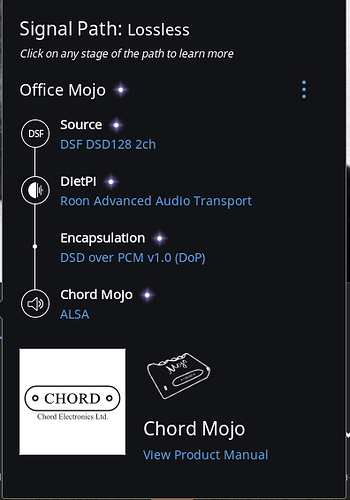 I always found the USBridge to be to unreliable or it may be dietpi that was the issue either way it out me of usb for ever. I switched to a BlueSound node 2 and have never had to do anything to it again it just works.

I play native DSD on my DAC with USBridge.