Just wondering if anyone else on the community has had an issue with what IFI on their website are now calling BRICKING on the xDSD Gryphon.
Basically the device stops being able to receive any signal, eventually shuts down and can’t be recharged or restarted until the device discharges and remaining charge completely.
I purchased mine just on 90 days ago and the first incident happened after the second day. Reported it to the HiFi Store but said i would wait till after the weekend before sending it back. It started to charge on the Monday and then continued to work well for about 5-6 weeks before dying again and being unable to charge or turn it on.
Sent it back to the supplier in Melbourne which took 8 days and of course by that time it had discharged and the store was able to charge it, told me it was a charging issue because i was using Apple USB A and USB C plugs. Anyway they sent it back and in the meantime i purchased a new 65W Charger.
Got it back on the Friday afternoon and it Bricked again on Saturday night. Unfortunately it was 100% charged when it happened and it took 10 days to discharge. Anyway, that was when i found the updates on the Support pages on the IFI Website describing the Bricking.
Finally did a charge but only did 50% in case it Bricked again. Tried to do the firmware updates on my iMac (after having to turn off Apple Security Protocols to allow the updates to run) but it Bricked again.
Sent it back to the supplier last week as this is now 4 times it has occurred and I have requested a full refund as it has only worked for 49 days out of 90 or just under 55% of the time.
Now I’m being Bricked by them as they are still claiming it is a charging issue and would not even look at the device to see that the LED Lights are on, even though the Device is OFF…

So predominately interested if anyone else has experienced this with the IFI Gryphon and letting people know this is now a known issue. I felt it must be a bit of an issue if they now have a section on their support page about it. Not looking for advise about refunds as that is all in hand. Cheers…

Attached a picture to show that the Device is off, but the LED Lights showing what was on when last used are still on. This is apparently how the device slowly discharges!! 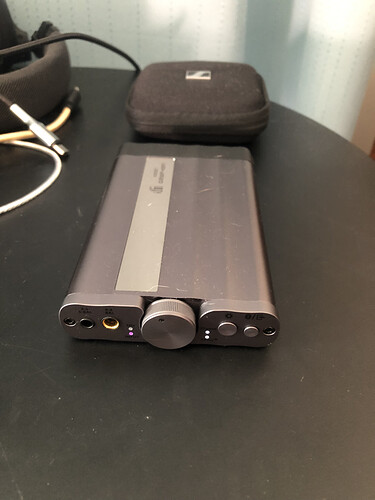 I had the same issue with mine. I thought it may have been an overheating issue as it was running very hot. I updated the firmware (using windows) and have had no issues now for a couple of months, even sorted the running hot issue. I would recommend using another computer and try to update the firmware, it worked for me.

Glad that you were able to get yours working again as I did enjoy the output from the unit when it worked.
However, it was totally unrecoverable according to the dealer even 2 weeks after the last incident.
Was very reluctant to jump into the possibility of the same issues reoccurring with another unit so got a full refund.
The experience was not great in that the dealer basically didn’t believe me despite providing over 40 photos and videos by Dropbox over a few months.
Update is that I now have a new Provider in another state here in Australia and I purchased the Matrix Mini-i Pro 3 which is working beautifully and allowing me to just enjoy the music without worry or hassle again.
Hope you can continue to do the same. Thanks for the message.

Did you only ever deal with your shop?

Or did you also raise a warranty issue with iFi Support? What did iFi say?

@dabassgoesboomboom
The store kept insisting it was a charger/plug issue and advised it would contact IFI… they didn’t.

I raised a support ticket online. They were pretty good and gave me a list of things to try, however when I advised them that I had already followed all those steps as per their support page and sent them some of the photos and videos they replied straight away to send it back to the store.

The store then took another 2 weeks to finally admit it was indeed DOA, but only after I had lodged a Claim under Aust Warranty Law with them and PayPal.

Ergo, why I’m not dealing with that store anymore!!