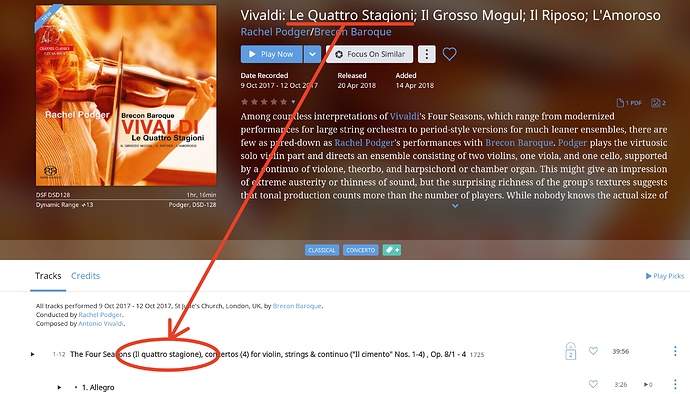 also… would be nice to have, instead of all 12 movements grouped as a single composition, the canonical Four compositions: “Primavera”, “Estate”, “Autunno” and “Inverno”

“Stagione” too, being singular (“stagione=season” instead of “stagioni=seasons”), is wrong 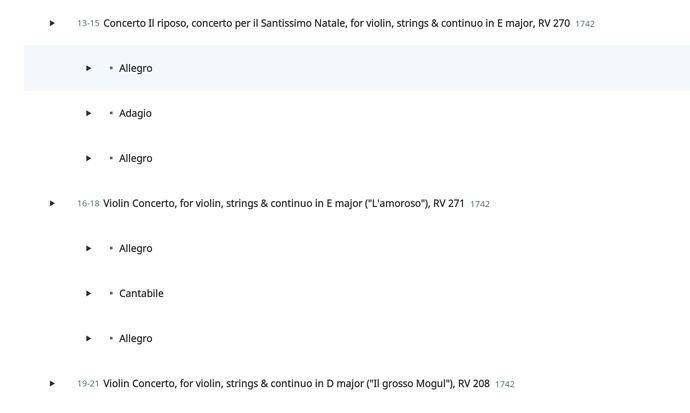 yes this is wrong, and seems to have been neglected since 2015.
anyone in the @support?

actually, the separate concertos do exist in roon metadata, and as in general roon is not really consisten when treating compositions that comprehend parts that are normally played as single compositions (see the many chopin etudes, and so on…)

Joel discusses this more in this post, I definitely recommend giving this a read:

Oh… Vivaldi Opus 8. I’m afraid that Roon can’t help you…yet. This is actually the main example that I use in internal discussions within the team. Quite simply, classical music like this needs to be given a hierarchical treatment. Concerto 1 (and 2, 3, and 4) can be considered as a concerto in its own right (Op. 8/1), as part of _ Le quattro stagioni_ (Op. 8/1-4), or as part of Vivaldi’s entire Op. 8. Why shouldn’t we be able to view the music at each level in the hierarchy with the possib…

We appreciate the feedback.