I'm confused about the proper use of the SECTION tag

I’m not completely sure about how to understand and use the SECTION tag as it was introduced in the 1.7 release notes. The example of using sectons to indicate acts in an opera is welcome, straightforward, and useful. Most importantly, what was a “work” before 1.7 hasn’t changed: it’s still the opera as a whole. (and opera is also the only context in which SECTION tags are mentioned on Roon’s “File Tag Best Practice” page). The other example given in the 1.7 release notes, however, Vivaldi’s “Four Seasons”, has more confusing implications: what were four “works” in the standard catalog have become sections.

There are a number of other cases in which it’s tempting to use the SECTION tag analogously to make groups of compositions easier to browse and find. Bach’s a primary suspect: “Brandenburg Concertos”, “English Suites”, etc. However, a quick experiment modifying the tags in an Angela Hewitt recording of the “English Suites” and then using “Metadata Preferences” to tell Roon to respect the multi-part composition grouping in the file tags (i.e. WORK: English Suites) results in Roon losing the ability to recognize what have now become sections as compositions and present its commentary on the individual suites. I find Roon’s commentary valuable – it’s one of my primary reasons for using Roon – so I backed out of that pretty quickly.

So my questions: Is there something I’m not grasping here? What’s recommended practice? Should I be waiting for something like a GROUPING or COLLECTIONS tag?

English Suites, to use your example, is not a composition per se. Rather, it is a collection of compositions. There’s Suite 3, BWV 808, Suite 2 BWV 806, etc. If you combine them, Roon will treat it as one composition, will search for it, and will come up empty.

SECTION is meant for sections of a single composition.

Speaking of commentary: there is some metadata for each Suite, and (I believe) some metadata for “the English Suites” as a whole. You COULD tag all the suites as a WORK called “English Suites (6), for keyboard, BWV 806-811 (BC L13-18)” [taken from AllMusic] and Roon will treat them as one giant composition with about 24 PARTs. Or you can tag each suite with its own WORK name, a better option IMO.

Hi @John_V. Quite right: the English Suites are not a single composition. Niether are the “Four Seasons”. Hence my question about what the Roon development team intended by treating them as one in the 1.7 release notes (Roon 1.7 Is Live!).

Can you send us an example album where you believe the SECTION tag is not working properly and we can take a look?

I’m not claiming that SECTIONs don’t work properly. It’s more that I’m trying to pose a question to the Roon metadata designers about just what “proper” use of SECTIONs is in light of the radically different use cases presented to introduce them in the 1.7 release notes.

One of those use cases, using SECTIONs to indicate acts in an opera, is unproblematic. In that case, SECTIONs are clearly part of and subordinate to WORKs.

It’'s the other use case, Vivaldi’s “Four Seasons” that has me wondering. In this case, what were four separate WORKs (267, 315, 293, and 297 in the Ryom-Verzeichnis that’s become the standard catalog) have become SECTIONs and the WORK (what Roon presents at the user level as a “Composition”) is now the “Four Seasons”. There are any number of other examples of groups of compositions that it might be tempting to treat this way, Bach’s French Suites, Mozart’s “Haydn” Quartets, Beethoven’s Late Quartets, etc. But if I take any one of these and use a tag editor to turn the WORKs into SECTIONs, and then make the WORK “French Suites”, “‘Haydn’ Quartets”, “Late Quartets” etc. and then use “Metadata Preference” in Roon to force that “Multi-part Composition Grouping”, then the the individual works in the group are no longer compositions and Roon is no longer able to present commentary associated with what had been individual compositions.

To take just one instance, in Roon’s default treatment of Bach’s French Suite, I can play the first of the suites and see the following screen: 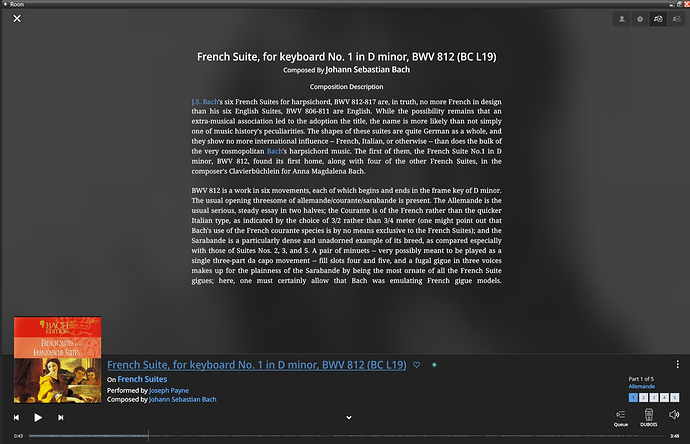 However, if I reorganize the French Suites as a single work using SECTIONs and play the first of the suites, the commentary captured in the screenshot above is no longer available.

In the end, I think I’m arguing that the use of the SECTION tag to deal with cases like the “Four Seasons” is a bad idea and opens up a big can of worms. The job would be more properly left to something like a “GROUPING” or “COLLECTION” or somesuch tag that was clearly superior to WORK in the hierarchy and didn’t disappear information associated with the WORK as a composition.