I'm gonna say this is a bug, a very annoying one: MQA albums do not appear in TIDAL list of albums

This issue has nothing to do with my setup. This is occurring on a regular basis:

Then, I go to the album (which I know should be available in MQA) in my own library, this is my music. Then I click on Versions. Then lo and behold, there is the TIDAL MQA album in the list!

Why is the MQA album not appearing in the artist list of albums in the first place?

And by the way, if I go to the Tidal desktop application, it shows the MQA album there in the list of all albums.

If you’ve added an album to your collection all Releases of the same Album is will appear under the Versions tab. This is correct behaviour.

As far as I know, albums that are part of your library are not displayed anymore on Tidal albums. They are show in “Versions” only.
Can you give an example of such album?

Let’s not confuse the issue. Yes, I understand that If I add a TIDAL album to my library, it will no longer appear in TIDAL.

But this is different: I have not seen or added this TIDAL album yet, and it is still not appearing in the TIDAL list of albums.

But it is in your list as a local file so it will always be presented as your preferred option. Is this happening to selections that are not held locally by you?

I have not seen or added this TIDAL album yet

But if you have added a non-MQA version of it, then other versions, e.g. MQA, will not appear in the Tidal list as @Martin_Webster said.

Just give an example of such album, so you can see if other users have the same problem (or it is something on your environment).

Both albums should show up as MQA albums.

Both do in my searches. Looking at versions shows there is a CD version too. 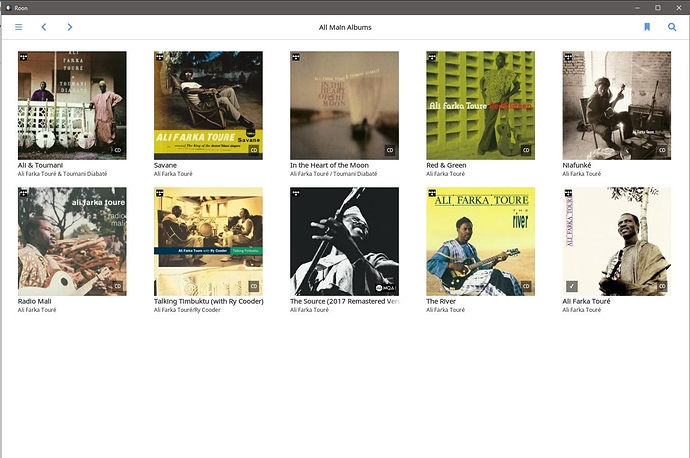 The behavior you’re seeing is the expected result. If you already have the album in your library, whether it be local, or from TIDAL/Qobuz, the album will not appear outside of the in your library “Main Albums” section. In cases like this, where the content is already in your library, navigating to the Versions tab is the proper way to see all other versions (including MQA and other streaming versions.

Since this appears to be “working as designed” I would recommend posting your suggestion in the ‘feature request’ section of the site.

Thank you all for responding.

The difference seems to be, if I have the album already in my library, mine or TIDAL’s as non-MQA, after that the MQA version of it does NOT show up in the TIDAL list of albums.

Let’s agree to disagree whether this is the correct design for this situation.

Let’s agree to disagree whether this is the correct design for this situation.

Well, I think everyone here is in agreement that this is how things are intended to work. Also, the reference to MQA is irrelevant; a remaster would be treated exactly the same. If you think Roon should behave differently then post on #roon:feature-requests.