iMac not appearing in Roon - not happened before

Mac Mini running Mojave, dedicated as core (had a SGC i7 but it failed completely recently, Mac Mini being used as replacement for now)

Network Details (Including networking gear model/manufacturer and if on WiFi/Ethernet)
All on hard wired ethernet with fibre into the house 75MBPS down, 17.5MBPS up, BT router into the house and then Netgear and D Link switches. 2015 27" iMac, 2018 Surface Studio and notebook, MacBook Pro, iPhones, iPads, Samsung Tablet. All current OS. All on hard wired ethernet, wifi for 'phones and tablets.

System has been basically stable ever since I started with Roon. Occasional minor issues, only the kind of thing reported elsewhere that restart of Roon app clears.

The subject of this support call is that the iMac is not recognised by Roon. The app runs on it fine but the iMac itself is not in the audio devices, even on the iMac itself. All other devices - Surface desktop and notebook, MacBook, Sony AV, microRendu are all fine. What happens is that the iMac reports the core and the devices attached to it as being “this computer”, which it isn’t of course. Have rebooted everything, ensure all is up to date OS and relevant software. On the iMac all other software recognise that the EX-8 is connected to it via optical and USB and if I connect other devices they too are recognised. That includes System Preferences, TIDAL, Qobuz, Spotify, Zoom and so on. All work fine. Is only Roon on the iMac that cannot see either the iMac on which it is running, or the devices connected to it. Roon on the iMac recognises devices on ethernet and devices connected to other computers - the core MacMini (jeepers it does not sound anything like the SMG i7) is also connected to the QX-5 via Cardas USB cable and that is recognised from Roon / iMac.

Are you running a firewall or anti-virus? Try turning them off as a test and see if the iMac shows up.

Firewall is off. I use BitDefender on all machines. Has not reported anything out of the ordinary. Just turned it off and no difference.

What is really odd is that the section in “settings / audio” shows “This Mac” at the top of the window and is the core machine, the Mac Mini, not the iMac. On all other machines it displays correctly.

When you set up the iMac did you use a Time Machine restore or Migration Assistant to bring data from another Mac machine onto this one? 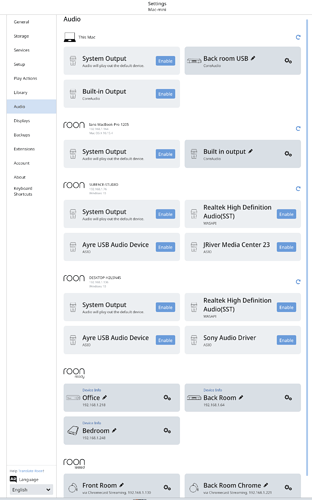 The above is screen shot from the iMac. At the top where it says “This Mac” it shows the core and its connections - the iMac does not appear.

Screen shot below is from the Surface Studio, taken at the same time. It shows itself, the core and the iMac does not appear. The other two machines re the MacBook (Same OS as the iMac) and the Surface notebook. Other networked devices are shown OK. 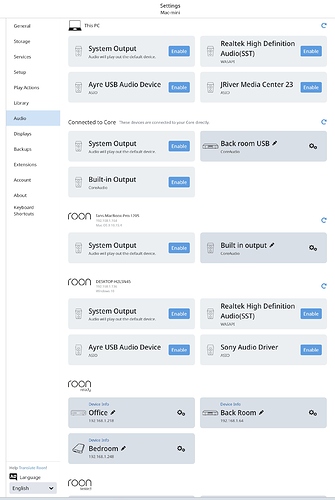 Hope the above helps…

Have just updated the Mac Mini to Catalina so all Apples are running the same software v10.15.4

Has not changed anything, problem persists