Importing the music library seems to be very slow

@support Hi, i am using roon in the test version. Setup: roon core on Synology RS818+, 16 GB ram, roon core is installed on SSD. Start of roon was the 6.1.2019. I checked last week the import and saw that not all files have been identified (3714 tracks) For this reason i decided to make a statistic:

I am using W10 workstation (64 bit), Fritzbox 7490, ethernet connection. Additionally i recognize that an album consisting of 3 CD ripped on the nas was not fully detected by roon (only CD 1 was identified). I am using flac files and mp3. Is it normal that the importing takes so much time. Currently it looks like roon is importing but the are since hours no additional identified or added tracks. I also saw that 599 tracks have not been imported because the file is damaged. I tried 3 files and 2 have been working with Windows media player. One is corrupt. I also read the instructions for files names and supported formats. Unfortunatels i could not find the problem. My questions:

a) The difference between imported and identified tracks seems to be constant 3714 tracks. Does the programm need more time to finalize?
b) Is it possible to check which files have not been identified
c) i do not know why 653 tracks have been added in one week (yesterday i put 7 ripped cd´s on the nas but these certainly not 653 tracks). May the import takes so much time

The music is ripped with EAC by myself.

If i am not sure that library is not completely imported roon does not make sense for me. Can you please help me to fix the issue.

Sounds like you have some files that roon isn’t reporting as corrupt but it is having problems with. Support may ask you for some logs off your server but will send you instructions.

Approxiametely one third of the music library is not identified. Additionally it is not possible to see which files are not identified. I also do not know why files are marked as corrupt and they are working with the standard player. I only checked 3 files (all 600 are too much:)) Hopefully there is a solution.

The difference between imported and identified tracks seems to be constant 3714 tracks. Does the programm need more time to finalize?

Chance is that Roon couldn’t automatically identify the tracks / albums. That’s why the number stays constant. You might have some luck trying to manually identify those.

Is it possible to check which files have not been identified

Yes, with the “Focus” feature (example starts in “Album” browser): 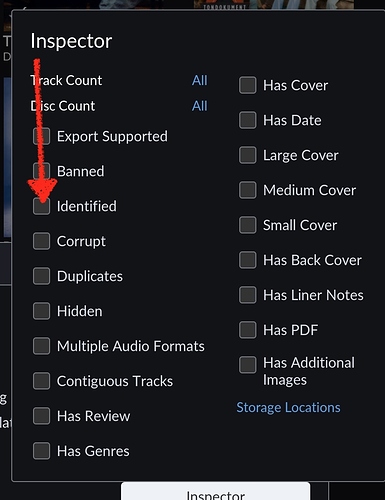 When you click on the green button, it inverts the filter:

The import should take hours not days so you have a problem.
@support will be along at some point.

Thank you for your input. It is interesting: if i invert the filter “-identified” i can see albums which are definitely working. I don ´t know what is wrong. Currently the status did not change (no tracks added / identified since hours). Approxiametely before 4 hours put some disks on the NAS and they have detected without problems. Maybe is the best to create a new data base and start from the begin.

Just to make this clear: “Corrupt” is different from “Not identified”. With the help of Focus > Inspector, you could also filter for albums / tracks which Roon thinks are corrupt, btw.

I understood this. Even when i select the category corrupt the music i working. There is something strange. I could not find the same issue in the forum.

Can you please provide a screenshot of your “Activity Spinner”? This should look something like this:

After posting this screenshot can you reboot your Core 3-4 times and then note the exact local time in your country (ex. 8:01PM) that you notice this behavior still occur? I can then enable diagnostics mode for your account and take a look to see if there are any common traces in logs that would possibly point to the cause.

Hi I stopped and started the rooon core for four times see sceenshot below. If necessary i can reboot the whole system 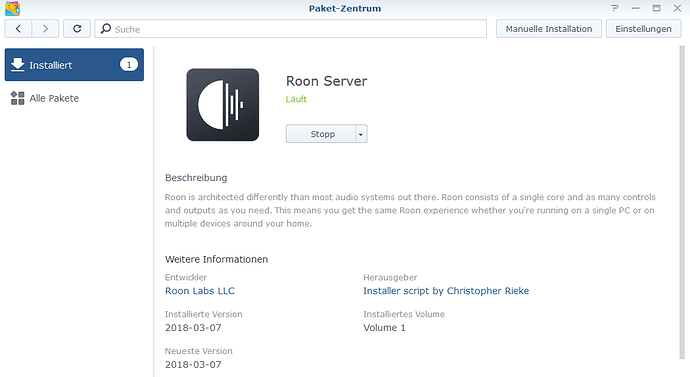 Time 9:03 a.m. Currently the active spinner is not doing anything. I forced a new scan and currently the acitvity spinner stopped. It seems as roon is of the opinion that the import is finalized…

Under Library how many cores are being set for analysis? how many files are skipped?

Currently there is the minimum but yesterday i increased to 4 cores (no difference). Currently app. 3700 are skipped.

I forced a new scan and currently the acitvity spinner stopped. It seems as roon is of the opinion that the import is finalized…

Do you mean to say that the issue has been resolved and that Roon imported the tracks? I can confirm that the diagnostics for your machine were received by our servers but I’m not seeing anything strange in them. I would check to see if your files are listed under Skipped Files and see if there is a reason listed there.

Hi Noris,
Unfortunately the music is not completely imported. For example: I know that i imported an album conisting of 3 CDs. Roon recognizes only one CD. This CD was ripped with EAC. Maybe it is sensefull to start the import process again. I don´t know how to change the Database and start the process new (reset). Approxiametely. 3700 files are according the screenhot above not identified. If i check the skipped files we discuss about 600 files (marked as damaged). I tried some of these files with the windows mediaplayer and they have been working. Additionally i installed now the test version of Jrive. Jriver could import without problems all files. Maybe an issue occured with the roon import.I have no idea what is wrong. Christian

I tried some of these files with the windows mediaplayer and they have been working.

Just because the files play on another player does not mean they are not damaged in some way. Many players do not have robust error checking on header information, for example. Roon does.

If this is the issue, one of the ways to fix them is to convert them to the same format, ie convert flac to flac. This will clean up any problems with the header/container. I used dbPoweramp to rip and convert. I used to use EAC and found dbPoweramp much better.

Hi Daniel, Are you of the opinion that the flacs can be different? The rip was done more or less done at the same time (for the mentionned album consisting of 3 cd´s only one has been recognized). I have a lot of mp3 and also flacs. I try to replace the mp´3 by higher quality files. Should i try to convert now all existing flacs for example with dbpoweramp. the flacs are sorted according artists. Is a mass converting possible with dbpoweramp?

Flac is a container format with other things in it than just “the music”, that is why you get meta-data for example. The container might contain errors that don’t affect the music. Some players ignore these errors, Roon does not.

If this is your issue, one way to correct them is to convert. Think of it as bringing up a word document and saving it as a different word document. The process of saving to a new file can correct container/header issues. I would suggest trying it on a test album first, be careful not to overwrite the original file, and see if Roon sees the new album correctly.

If that is the case, dbPoweramp does have batch convert. I used it to convert all my Wav files to FLAC. Although, if you have MP3s; either leave them as such or re-rip from CD. Converting an MP3 to FLAC is not going to do anything for the quality of the file, you are just stuffing the MP3 in a FLAC container. If you want a better rip, than you have to go back and re-rip from the original CD.

Just the 600 that may be problematic. Doesn’t take long as it isn’t really doing much.

Hi, I think i could find one error sour. Im mentioned a problem of the import of an album consisting of three CD´s . I did now a very detailed check. The album is from amy mac donald Titel: " Love Love UK & European Arena Tour Live 2010". This album is more or less seldom. You can only buy it used and may be it is not in the roon library available. I put the CDs with the following structure on the NAS Amy Mac Donald \ Love Love UK & European Arena Tour Live 2010 and i made 3 Subfolders for CD1/CD2/CD3. The first CD was imported correct (also with the cover i tagged with mp3 Tag). For the second i recognised that roon added the Cover of the album “Life in a beautiful light” Roon did the same for the third CD.

I would like to see not now 3 albums. See Screenshot 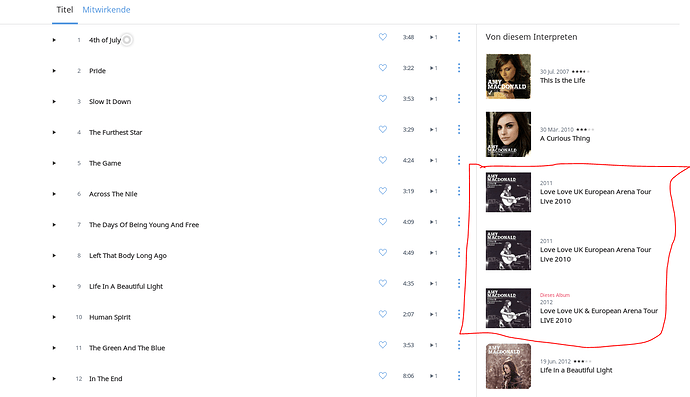 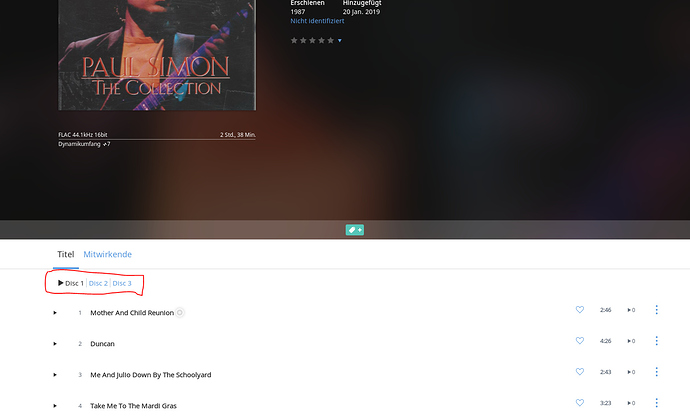 I think with seldom albums it is necessary to check the import manually (espacially if it consists of two or more Cds). Was the folder structure wrong? Is it necessary to organize the import in another way?

About the mp3´s: I tested on file and converted with dppoweramp to “mp3” There was no change. Roon showed in the library the file as “damaged”. Is it necessary to convert the mp3 to another format (flac). The mp3 are not such a big problem. I would like to replace them by flac files. If there is an easy way to convert it is fine. If not it is not a problem.

I would be also interested whether now 600 files have been skipped. Roon gave the message (see above) that 14552 files have been added to the library and 10838 have been identified. Does this mean the more or less 3700 files are not recognized (manually it is impossible to check- Maybe there is a statistic)

Thank you for your support

Hi, these are some titles in differant albums. Honestly i think for a manually work it is too much. I am not sure whether it is a good ideas to convert the whole mp3 folder. Additionally i tried converting one mp3 with poweramp to mp3. It was also marked as damaged. The mp3 are at the end of the day not that dramatic… but it would be nice to use them if possible (as long as i have no substitute)