Impossible to read 24/192 files with qobuz (no problem with Audirvana !)

It is impossible to stream 24/192 files with Roon and Qobuz. I haven’t any problem with Audirvana with the same configuration (iMac and Kef LS50W with ethernet) !

Hi Tony! You CAN stream HiRes files with Roon and from Qobuz. But going into your Qobuz account and make sure you’ve configured it to receive 192K files, particularly if you were a subscriber who benefitted from the data rate upgrade earlier this month.

Thank you for your answer. Unfortunatly it is not a configuration problem : roon tells me it is perhaps a connexion problem or Qobuz is streaming too slowly. But once again it is very fluent with Audirvana with exactly the same 24/192 (Chet) file streamed with Qobuz.

Darn, I hoped that would solve it… FWIW, I’m running Roon Core on an i7-based Mac Mini and I also have throughput problems within Roon that I never have with the native Qobuz app running on the same Mac. I’ve posted about it in the forum. My instinct–from having developed commercial software–is that Roon needs to profile their code for efficiency and also prioritize playback functions. I have particular dropout problems when Roon is updating the database, a process that seems unnecessarily inefficient compared to other DB-based music apps. Or, they could allow us to manually choose when to update to keep that process away from our listening time.

I think some people have problems with the LS50 speakers limiting them to 24/96 for some reason.

Thank you : I learned something.

I agree ! Unfortunatly I noticed dropout problems with Qobuz are more frequent with the last version 1.7 (mainly with classical music with several tracks, « movements », in one piece for the gapless effect). For example sometimes only 50% of the symphony with a « jump » from the first to the third movement !

I see (hear) exactly the same problem, Tony, also with classical music. Roon will have trouble with the throughput of a digital stream and will skip to the next movement. This is probably fine with overcomposed stuff like Gliere’s “Ilya Murometz,” but it makes those short Milhaud symphonies last about as long as a TV commercial break.

Unfortunatly I noticed dropout problems with Qobuz are more frequent with the last version 1.7

Yes, I noticed the same thing.

Do you have local music?

I stream this from Qobuz (192/24) without problem, apart from the occasional dropouts just noted. 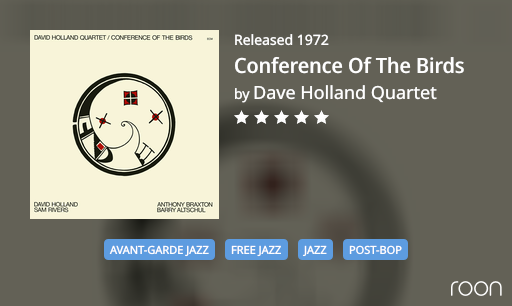 And I repeat myself : no problem at all with Audirvana ! But thanks to Bob, I think I understood why.

I tried your reference and the same problem appears but later (3 or 4mn instead of one minute usually).