Improvements to the PERSONNEL tag

I’d suggest Roon support using the user-specified delimiter for multiple personnel&role entries. I would use the current new-line delimiter, but my tagger of choice, Metadatics, doesn’t accept multiline entries. (I tried my semicolon delimiter on a one-line entry without success). Yes, multiple PERSONNEL tags are possible, but why put me through that? After all, multiple ARTISTs are supported.

Second, I don’t get the need for an approved list of PERSONNEL duties (except I suppose for Roon to know where to put them on the credit list). But if you must, then include an area to enter PERSONNEL tags within Roon and offer an error checking routine to flag incorrect roles.

Third, I’d really like it revealed how related personnel tags (and others) are handled (i.e. what maps to where etal), rather than the current try-it-and-see method. I know it’s complex but it’s not too complicated. One spreadsheet-like reference sheet and you’re done. Bury it somewhere where only true nerds with no other life can find it. (I did see a version in the KB but it wasn’t in print form).

You can already edit the Credits in Roon.

Edit > Edit Album > Edit credits allows you to add personnel and their roles.

but my tagger of choice, Metadatics, doesn’t accept multiline entries.

That’s not great. For FLAC files a tagger can represent multiple entries as performer=x;y;z, but it should write out 3 performer tags.

My Metadatics on Mac does… 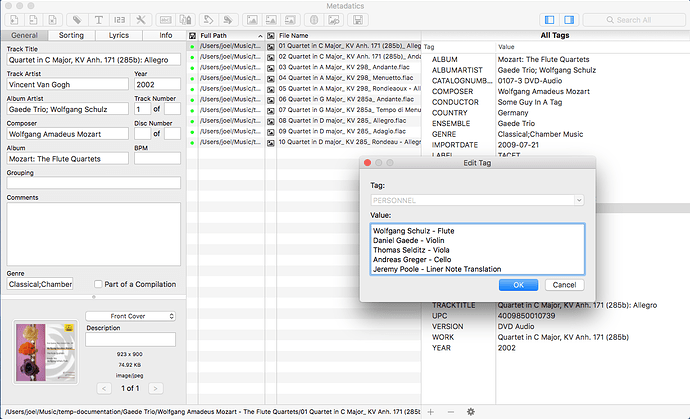 When you enter personnel how do you progress to the new line? Enter? Shift-Enter? Mouse?

I’ve tried all three; no soap.

I am skeptical of user edits. I know, or think I know, file tags will stick.

Evan, Metadatics will take ARTIST Joe; Tom; Harry, but I can’t seem to coax it to accept a new line.

It shouldn’t accept a new line. Does it not have an option to write that line out as 3 entries when saving?

Thanks. My suggestion stands, though to support the user-set delimiter.

But I can stand down if it’s controversial. Its not a hill I want to die on.

I get what you’re saying, and agree there’s a consistency change needed Roon side also. Having said that, delimiters like ; should strictly speaking only be written to mp3 tags because VorbisComments (which is what is used in the FLAC file specification) allows for multiple entries for the same tag name. So whilst the tagger enables capture as x;y;z, it should write out 3 entries for FLAC files.

As an example in puddletag, whilst multiple entries are displayed and can be captured in puddletag using a delimiter: 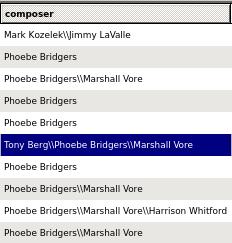 This is what puddletag saves to the underlying file:

Metadatics should be doing the same.

In all three cases, the Roon interpretation is something like this:

Just to complete the experiment, I EXPORTED the album to the outside world, and opened that copy with Metadatics. Here’s there display of the tags: 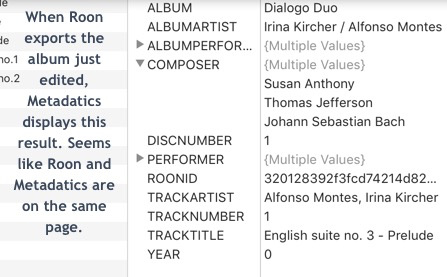 I still can’t confirm where the translation to three composers is taking place, but Metadatics and Roon do it well. Meta correctly SHOWS multiple values, and Roon correctly interprets it.

So my sole desire was parallel treatment of tags. If this:
COMPOSER=Susan Anthony;Thomas Jefferson;Johann S Bach
works (and it does), then so too should this:
PERSONNEL=Susan Smith - Flute;Tom Thumb - Bass; Tim Smith - Drums

Agreed. For teh PERSONNEL tag, does Roon correctly interpret/ show PERSONNEL=Susan Smith - Flute;Tom Thumb - Bass; Tim Smith - Drums if you enter if entered once separated by the new line delimiter (CTRL Enter) or not under any circumstances?

Only new line delimiter is recognized. Your PERSONNEL example would result in nothing. Since the “;” isn’t recognized, it interprets Susan’s role as:

…and since that’s not an approved role, the line is ignored.

BTW, the spaces on either side of the dash are necessary.

[Note: no inside knowledge here. Just my interpretation]

If I recall correctly Puddletag writes multiple entries by default but includes a function to consolidate multiple entries into a single delimited entry should you want to. The versatility is handy.

Sadly, although its the best Mac tagger I’ve found, user support is AWOL, and the latest edition is 2016.

I’m toying with the idea of having Puddletag refactored and made Python 3.5 compliant. If I go ahead with it it’ll run on OSX, possibly still does now.

The ; delimiter for personnel did not work.