In case you're wondering why we are confused

TrASh
The sad part is where it was published and who wrote it.

I saw that too.

BTW you haven’t posted in a category, if you have one in mind let me know and I’ll move it.

I posted here as a small way of helping to prevent a flame war since there are many in this community who would defend the line of thinking expressed in the article.

I believe the term given to pot being stirred in the article is FUD - fear, uncertainty and doubt. FUD is a great way to sell sand at the beach.

Sorry, i meant its not under any particular category, so may not be seen by many

Exactly my point. I have to say sometimes it’s good being a (semi)audiophile forum because then I learn about the nonsense I can safely ignore.

I wonder if “articles” like this aren’t meant to gin up agitation and therefore page views just to get higher advertising rates.

In the same issue (? I’m not 100% sure since I received the article via email) there is an article about using DSP for room correction and yet there was no mention of the processor being used and how different processors might produce different sounding results. After all a 4 core processor might work differently than an 8 core processor - the ones and zeroes might be reassembled differently. The lack of scientific rigor in the audio press is astounding!

By the way, Harley’s use of the term “jitter” is not describing the thing I have long understood to jitter to be.

Although this exercise was illuminating, it still didn’t answer the question of how those timing variations on the disc made their way through an enormous amount of complex signal processing (the error-correction decoding alone is mind-boggling) to somehow affect the CD player’s analog output signal.

A question for Zeno. Something to do with Planck length/time and the ultimate granularity of the Universe?

I wonder how many people started listening to music on a super system. I started on one of the things below, stacking up singles.
It was the music that got me not the crystaline quality of … 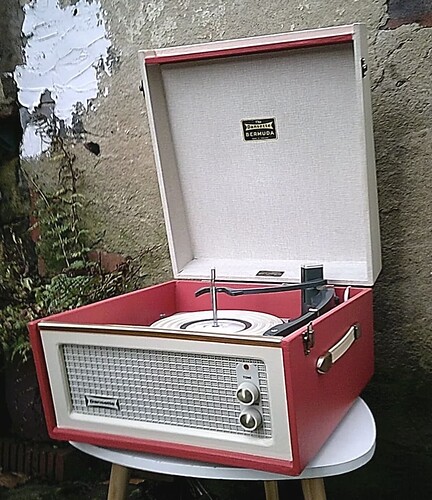 Amazing how the audio press doesn’t follow Sherlock Holmes’ simple rule: eliminate the impossible and whatever remains, no matter how improbable, must contain the answer. Instead they eliminate the most obvious (for example, the differences are not real) and focus solely on the impossible (for example, jitter imbedded in the pits). Meanwhile Harley flatly refuses to ask the most obvious question: is The Wadax Reference Server only doing things in the digital domain (keeping in mind that DSP does actually alter the ones and zeroes) or is it actually altering the analog signal. Take your pick but either way is altering the signal.
FUD (squared!)

Or, job security. What if he had no magazine to edit?

More than once, I’ve had a client tell me (I was a commercial retoucher) that some image was “a few points too” red/blue/whatever. I would wait a couple of hours and send them a duplicate with a file name change, and they’d thank me, saying it was now better. It was a matter of wanting to feel like they had input in the process, though I don’t thing that they realized that. They really believed that there was a difference between the two files. (Of course, I only did this with clients that I knew had no idea what they were talking about; I took direction seriously from serious clients.)
People imagine things and believe they’re real. It’s not surprising, really, considering the nature of reality and how different it can be from one person to another.

Interesting view. So it’s a psychological need to have some agency in an area where in reality you have none. Good point!

People are uncomfortable when they feel like they should know something, but don’t. Instead of keeping quiet or spending the effort to learn, they assert things that they think make them sound knowledgeable. It often backfires.
Not knowing has become stigmatized. You’d think it would head in the other direction as the mass of our knowledge has grown, since there is no way to know everything, but no.

Or, job security. What if he had no magazine to edit?

I always find it interesting to compare two of the main interests/hobbies that have been greatly affected by digital - photography/video and audio.
In the world of photography, they focus (no pun intended) on the things that matter, like lens, and ignore the nonsense, like which SD card produces a better image. Whereas in the audio world they dwell on nonsense, like bits somehow aren’t bits, and pay little attention to things that really matter, like proper component matching.

So I did a quick count and according to TAS, since 1986 approximately 2,341 veils have been lifted and 1,789 windows have been opened. Also 1,345,275 solid billets of aircraft grade aluminum have been made in audio equipment cases.

There is a difference, I think, between imaging and audio: audio is less concrete/objective, harder to pin down, and is more affected by psychological vagaries. In a photo, we can all see that lens A is sharper than Lens B (though there are “magic eyes” people, oy).

I agree. Viewing a photo is not time dependent and one can view photos side by side in order to make a direct comparison. Audio doesn’t work the same way and it is just that difficulty in making direct comparisons that keeps audio deep into voodoo and magic. Rather than make the extra effort required to do meaningful comparisons, the audio press is lazy and resorts to the least effective means of comparison, like comparing a new version of a speaker with their memory (oh and a few “listening notes”) of how an older version sounded when they reviewed it three years ago. And then we are expected to take them seriously?

Yeah, but that’s not what sells ads to the folks making those high-profit-margin products. Imagine if a magazine started saying that analog isn’t necessary any more and that low-priced Chinese-made gear works as well as the boutique stuff! Their advertising would disappear.