In Roon 1.8 “Show hidden tracks and albums” setting does not work properly

Wired ethernet connection to the Nucleus Plus

Nucleus Plus connected to my Bryston SP-4 Surround Processor via HDMI.

In Roon 1.8 “Show hidden tracks and albums” setting does not work, at least in my setup. It certainly worked properly in Roon 1.7.

I am going to present the major problems this presents in the order in which I originally discovered them. I will also indicate related issues as they come up.
For the record, I do have the “Show hidden tracks and albums” setting set to “Yes”.

I. Home Screen → Recent Activity – Added
Since Roon 1.8, this screen seems to only display the higher resolution version. For example, I recently ripped both the SACD surround layer and the CD layer of Mendelssohn: Complete Chamber Music for Strings Vol. III and only the Surround (DSF 5.0) version appears.

Over the past few days, a couple of very strange things have occurred regarding the above display.

Also, for some reason the latest Roon Build turned off the “Format”, “Version” and “Dynamic Range” settings in the “Customize Album Display” setting.

The listing does not display all the versions I have. Using Mahler’s Symphony No. 1 as an example, I have 23 recordings of this work but only 20 are displayed. Missing are CD versions of SACDs conducted by Ivan Fischer, Michael Tilson Thomas and Manfred Honeck. However, both the SACD and CD versions of SACDs by James Levine and Bruno Walter do appear. All 23 recordings including all the versions appear in Composers → [e.g. Gustav Mahler] → Overview. A random sample suggests that most SACDS and possible other high resolution formats such as DVD Audio/Video and Blu-ray Audio have this problem. This type of problem does not appear to be format or genre specific but is most noticeable in Classical music or Soundtracks where Composition is more important.

There are a number of other problems with the Composition listings.

If you use the Album View, the Format, Version and Dynamic Range is displayed. However, if you go into the Recordings View, this information is not displayed. Unfortunately, at least in my case, I cannot even get it from the title because the title is usually truncated such that the relevant information is cut off. For filing reasons, I put all this information in parentheses or square brackets at the end of the title. For example: Mahler: Symphony No. 1 in D Major; Honeck, Pittsburgh Symphony Orchestra [DSF 2.0]. Thus, even when the different versions are displayed, you don’t know which one is which without going into each album. I believe that at least some of this information was superimposed on the album cover in Roon 1.7. In any case, this information should be displayed on the Recordings View screen somehow.

There is another oddity about the two views that can be explained by using Composers → John Adams → Harmonielehre as an example.

In both cases there are 3 recordings listed but in fact there are actually 5 recordings, 2 of which are SACDs which only have 1 version listed. The weirdness is that in the Album View, all 3 album versions are CD quality (1 CD plus 2 CD layers of SACDs) whereas in the Recordings View, there are 2 DSF 64 versions and 1 CD quality version.

Finally, the sorting function in these views is much worse than in Version 1.7. As it stands now, the only even vaguely useful sort of any kind for classical music is by album title; however, this sort still leaves a lot to be desired because of the inconsistencies in Classical music titles. As a result, different recordings by the same artist or conductor are scattered throughout the list. The most useful sort for classical music is by artist which groups these disparate recordings and makes it easier to search and to browse. As I recall, Version 1.7 had the additional sort options for Artist and for Ensemble. I believe that within Artist, priority was given to Conductor. This worked extremely well and would be a very desirable feature to reinstate.

III. The Library Symbol within an Album

This symbol of course gives you the number of recordings of a work. In the case, of the Mahler example used above Composers → [Gustav Mahler] → Compositions [Symphony No. 1 in D Major → Work/Track within the Album [in this case “Symphony No. 1 in D Major”] the Library symbol lists 23 recordings. However, similar the listings under individual works in the composition view, only 20 of the 23 are displayed.

To reiterate, all of the above problems seem to result from the “Show hidden tracks and albums” setting not working properly or at least being applied inconsistently. It is a real mystery to me as to why some albums are hidden and not others. I simply cannot find a pattern to this behaviour.

It is particularly frustrating that in Roon 1.7 all these issues did not exist apart from the inevitable human error that can occur when you have just over 1,000 high resolution discs with potentially more than one layer to rip. Although it would be difficult but not impossible, I do not particularly wish to have to go through each on of these items to see if there is a problem, particularly when one did not exist before. In any case, I am not even sure how to fix the problem even when it is identified. The only solution I can see at this point is to “reidentify” the “hidden versions” by using the file data instead of the Roon metadata. However, then one loses a good part of the Roon experience with reviews, additional information, etc. Even then, I am not sure that this fix would work in all cases.

I can only hope that you can find a way to check and see if there is something wrong with my setup and suggest some remedies. If it is a Roon 1.8 issue, then I hope you can fix it there. Hopefully, you will also consider looking at some of the other problems that I brought up such as the sorts for the Album and Recordings views within the individual Composition listings.

Thank you in advance for your efforts. I hold out some hope that you can help with this as you have vastly improved the Boolean Search function in a relatively short period of time (Kudos are definitely in order).

Could you check the status of the “Only complete recordings” setting under the sort menu when you list compositions?

There is no such option in my sort menu for “Only complete recordings”. I assume that you mean Mahler → Compositions → Symphony No. 1 in D Major “Titan” → [Sort menu]

This sort menu lists the following options: Recording date, Release date, Popularity and Album (with up and down arrow toggle) and, of course, the 2 View options: Albums and Recordings (currently highlighted).

The sort options for the entire list of compositions i.e. Mahler → Compositions → [Sort Menu] are Sort by Composition Date, Sort by Popularity and Sort by Title (currently highlighted).

I have never seen the “Only complete recordings” setting anywhere before.

Here are my Version settings: 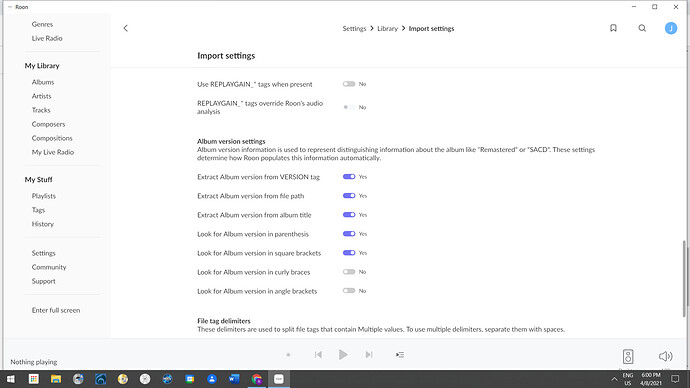 I never use angle brackets or curly braces. 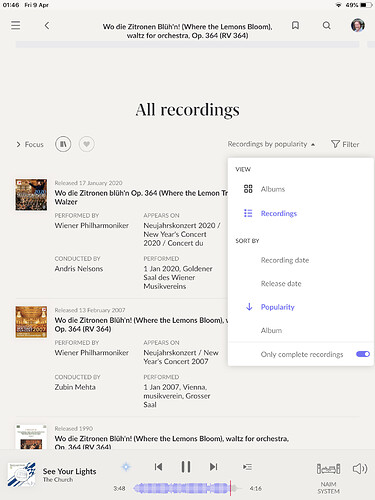 I had to ask on another thread, it’s far from obvious!

Please see here for where to find "Only complete Recordings"setting: Bug 1.8 - 778: Album Count for Albums "In Library" often incorrect - #15 by Philip_Gibson

Sorry but that option simply does not appear anywhere. Here are a few screenshots below of the Mahler example I have been using.

I will try other composers and genres but so far have not had any luck. 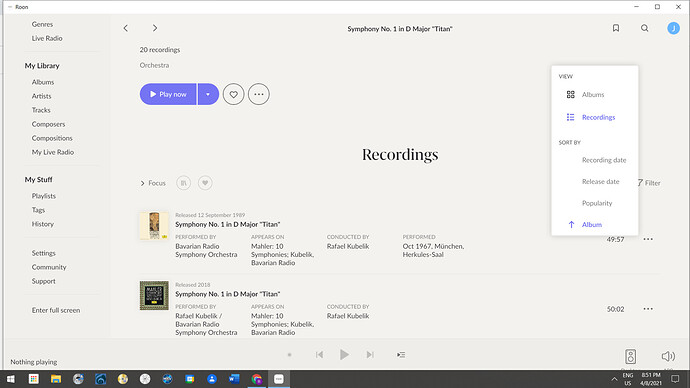 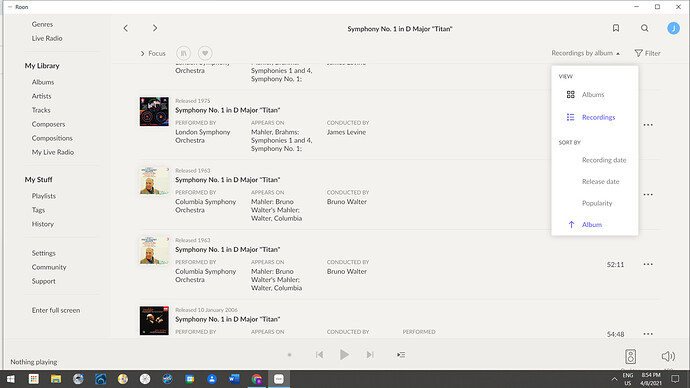 I have tried several other composers and compositions in various genres but the Only complete recordings option never appears.

You have to look in the Compositions page.

If by “Compositions page” you mean My Library → Composers → Compositions (e.g. Mahler → Symphony No. 1 in D Major “Titan” → Sort menu), then I have looked there numerous times to no avail.

If by “Compositions page” you mean My Library → Compositions (e.g. Symphony No. 1 in D Major “Titan”), then I find nothing there remotely resembling a sort function with the Only complete recordings option. Why isn’t this option in the General Settings where any normal user could actually find it?

I have looked in the relevant Library settings numerous times and this option is simply nowhere to be found.

Is this the Compositions page you are referring to? It doesn’t look like it and if it is, I can’t find anything there. 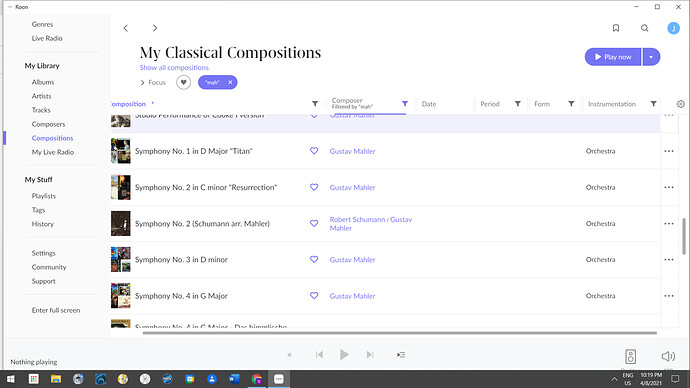 I did a couple experiments today.

First, I repeated the same searches on my iPad but unfortunately the Only complete recordings option still does not appear.

Second, I went to my dealer and searched in exactly the same way but in this case the Only complete recordings option DOES appear. This should shed some light on the problem. Obviously, for whatever reason, that option (and perhaps some other options relevant to these problems) is either not available or not functioning properly in my system.

I hope this gives you some ideas.

I hope that you have been able to make some progress in solving the problems that I outlined in my original post. Recently I have done a few more experiments and have a few more observations to share. I must apologize in advance if I repeat some of what I have already said but it is useful to do so to give the proper context.

My apologies for the long post. Hopefully, this outlines the problems with hidden albums in Version 1.8 in such a way that it will help lead to some solutions. It is particularly frustrating that these problems did not exist until the release of Roon 1.8.

Addendum: For what it’s worth, I have just discovered that if you go into Composer → Overview → Recordings, the “Only complete performances” toggle appears. However, it is grayed out. I must confess that this is an option in Roon 1.8 that I have never tried before.

As an aside, it should be noted that this view gives you recordings in which the Composer is also a performer. Interestingly, it does appear to list the different versions (e.g. both the CD and SACD layers of an SACD). However, unfortunately it lists the compositions by Work title instead of Composer/Work title. In Classical music of course, there are lots of titles that are meaningless on their own such as concerto as there are numerous compositions by numerous composers with that title. They should definitely be sorted and displayed by Composer/Work.

I realize that Roon staff are busy with the fallout from the 1.8 release but I am wondering why there hasn’t been some sort of response to my query; it has been 3 weeks since my last post.

I have no idea whether the problems that I am having are to do with problems with my system, problems with Roon 1.8 or some combination of the the two. In any case, it would be good to get some suggestions as to how to proceed.

Thank you in advance for your assistance.