I get 2 new MQA CD samplers from Universal Japan but not every tracks identified as MQA encoded by ROON, and unable to call out MQA core encoder, while another MQA CD Fairytales can be decoded by ROON MQA decoder, please help how can I making the ROON MQA decoder activated for my new album? 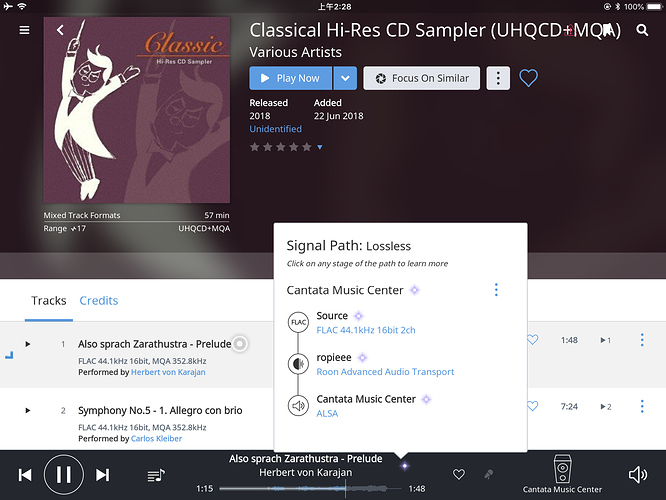 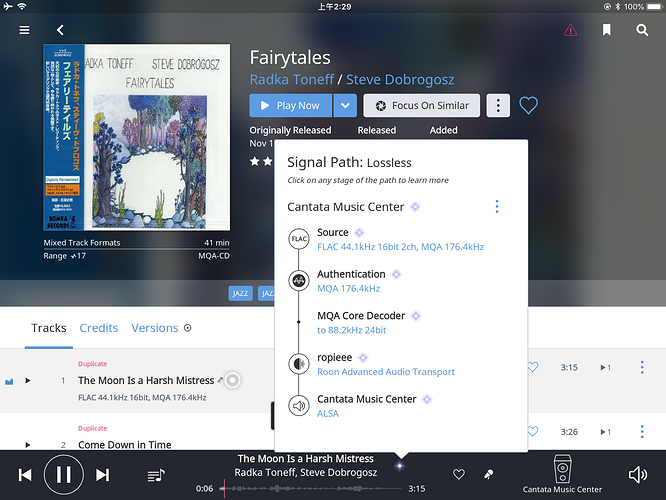 Hi @Cheung_Hon_Wah ---- Thank you for the report and sharing your feedback with us! The insight is greatly appreciated!

Moving froward, to help aide in why you may be experiencing this behavior with the mentioned MQA CD, may I very kindly ask you to please provide me with the following:

Hi @Cheung_Hon_Wah ---- Thank you for touching base with me!

Confirming that I have seen the PM and downloaded the provided media sample. I can verify that I am seeing the same behavior you have reported here and as such I will be opening a ticket with the media attached for further analysis by our tech team. Once your ticket has been updated and passed back to me I will be sure to share the team’s thoughts/findings with you in a timely manor. Your patience during this process is appreciated!

@eric - this may be a red herring, but in this YouTube review of MQA-CDs, the reviewer has one CD that switches in and out of MQA frequently mid-track (skip to 13:05). Could the problem lie at the source?

@eric - this may be a red herring, but in this YouTube review of MQA-CDs, the reviewer has one CD that switches in and out of MQA frequently mid-track (skip to 13:05). Could the problem lie at the source?

Possibly. Or the problem could lie at the CD player.

With tools such as dBpoweramp and FLAC, we can confirm bit perfect ripping and playback. But with CD players, we never were assured of bit perfect playback.

This player in question may not provide bit perfect playback. That could be due to tracking or demodulation errors – less likely. It could be due to some black box digital processing – more likely.

Probably yes if there’s a manufacturing defect on the disc itself. The error correction in Redbook CD can compensate errors to a certain limit (bit perfect correction), thereafter it uses ‘masking’ effect to reduce audible drop-out (not bit perfect). When this happens, MQA decoding is interrupted.

He needs to compared to actual CD vs MQA CD for more accurate comparison. In my listening test, undecoded MQA sounds worse than a standard CD version.

Hi @Cheung_Hon_Wah ----- Just touching base to confirm that I have seen your PM and downloaded the provide media samples for review. Thanks again!

Once our techs have completed their evaluation I will be sure to share their thoughts/findings with you asap. Your patience during this process is appreciated!

For what it’s worth, I’m seeing similar behavior with the Hi-Res CD Sampler for Jazz and two other UHQCD MQA discs that just came in today. I’ve recorded my findings here. (Note: there are three sheets in this workbook).

Note that the FLAC files were created using dBpoweramp with secure settings. As such, they are 16-bit MQA files instead of the usual 24-bit. Not sure if that makes detecting them more difficult; however, Roon had no problems detecting MQA in the three MQA encoded CDs that I bought from Chesky:

Have you try playing back on a CD player and hook up to MQA DAC via optical or coaxial cable? If a disc issue, you have interrupted MQA playback.

Good suggestion, but I don’t own a CD player, and I don’t have an MQA DAC that does full decoding (although I have several DACs that are MQA Renderers).

Essentially, Roon was only able to detect MQA on two of the eight tracks on the jazz sampler.

This sounds similar to what reported in another thread, for which a ticket is already open:

Hello @Andrew_Leung, Thanks for sending the media over to us, we have been able to reproduce and a ticket has been filed with our developers regarding this issue. The ticket is currently in the backlog but I will be sure to update you once any progress has been made on this issue. Thanks, Noris

We’ve just released Roon Build 536 which includes changes that we believe will help improve things here. Please give Roon an update on all of your devices and let us know if you still have any trouble!

Hi everyone! Another release is rolling out now, with new functionality and a number of bug fixes and performance improvements. Auto Sleep Roon Build 536 includes Auto Sleep, which automatically puts supported devices into “standby” mode if you haven’t played anything recently. And after going into standby, your device can easily be “woken up” just by playing content in Roon. This setting will work with Roon Ready devices that meet the above criteria, as well as devices from Devialet, Linn, a…

Finally, my MQACD all recognized.