Inconsistent placement of format in browser

In my configuration, I have the album version shown in the browser.

If an album has no version, then the format is displayed in the bottom right corner.

However, if there’s a version, then the version is in the bottom right corner and the format is above it.

Why not just always put the format in the bottom right corner? Consistency is good. 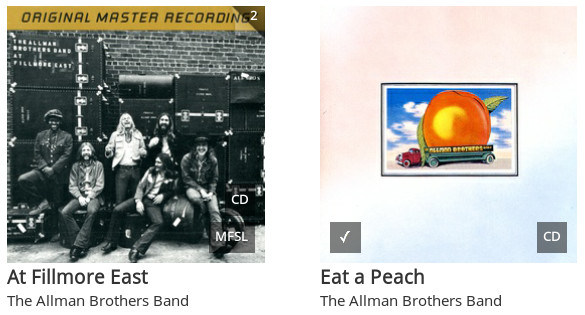 Is there a reason the current behavior is preferred?

Everything in my library has version information, so it is consistent for me.

Everything in my library has version information, so it is consistent for me.

Hah! Not sure I want to go that route, but you’ve planted the seed.

My thought was the base for my library would be if the format adequately describes the version, anything else gets an explicit “version”.

Did you add the VERSION tag, encode it in the filename/path, or edit Roon’s metadata?

What kind of identifiers did you use for vanilla redbook CDs and various hi-res formats? I’m not sure I’d like having redundant formats and versions in so many cases.

I don’t version tag streamed albums, I think that is futile since it can change and loose the information tagged.

On content I own, for CDs I put the record label & Number from the CD spine in brackets like [ABKCO 820 140-2], which is Rolling Stones Hot Rocks Vol. 1. For high res downloaded material, I put in the high resolution source in brackets like [ProStudioMasters] or [BandCamp].

Why? Because even if it is a box set, I’d rather have the individual albums identified.

Thanks. I appreciate the reply.

I standardized on square brackets for formats other than red book CD, eg. [24/96k]

The majority of my boxed sets are compilations, but I think I have 2 that are a collection of individual albums. I’ve thought about breaking them up. I like what you did there. Does Roon identify the album when it’s split apart? (I know there’s lots of heated discussions of Roon’s [mis]handling of box sets, so we don’t need to rehash all that).

So far, all the box sets, which I have split apart have been identified as the individual albums. And by split I mean, top folder is artist say David Bowie, then next folder is Five Years Box set, then under that a folder for each individual album in the box set, Aladdin Sane, Ziggy Stardust, … etc etc

Any ideas on how to handle boxsets of individual albums but with an extra album (like rarities or b-sides, live)? For example the genesis boxsets.