Inconsistent UI for Beethoven fans in 1.8

Herbert von Karajan recorded 4 Beethoven Symphony cycles in each of the decades 50’s, 60’s, 70’s and 80’s. This is mentioned in at least one of the roon album reviews for the different cycles. It is a bit random which of the 4 versions roon will identify against, so you are probably going to have to manually identify and give a few more clues in your tags if you want to get the release match correct.

I have 4 versions, two for 1963 (redbook and SACD), and one each for the 70’s and 80’s. Opinions vary but the 1963 version is the most highly regarded by many reviewers. Problems with 1.8 have encouraging me to seek out the 1950’s cycle, maybe it is on Qobuz. That’s good. But what is not good is that changes in the UI make it much more difficult to navigate or at a glance confirm the version I am listening to. In 1.7, although it required a lot of manual intervention it was at least possible to get a clear and consistent display of recording and release dates if that is important to you. I certainly didn’t do this for everything but for a few favorite recordings I have gone to the trouble.

So for example. The 1977 version has no album description and looks like this. I don’t like the grey on grey on grey design choice (another story) but if I squint I can see the recording date of 1977: 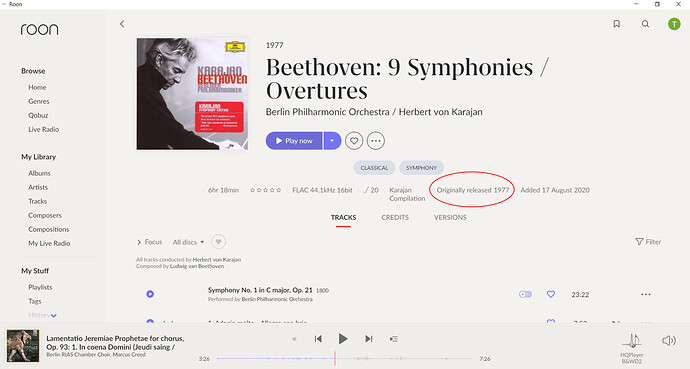 On the other hand the 1963 version has an album description but now I have lost the most important piece of information about this release (beyond the obvious) which is the recording date: 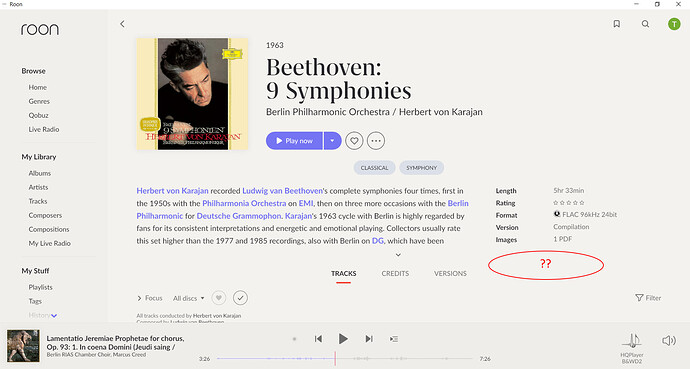 There are now well over a thousand posts on 1.8 in various threads so I don’t remember where but there have been a couple of comments on this inconsistent layout. I am just trying to point out that for Beethoven fans at least there are functional as well as aesthetic considerations to the design choices that have been made.

This layout inconsistancy appears accross the board: Those Albums with album description/review get a different layout than those without album review.

Good post Tony, if I may add as well (think this was a problem before 1.8 as well), that say you have the Complete Beethoven Edition (or the newer BTHVN one), which have 100+ discs each, and which have several recordings of the same Symphony, searching for a symphony shows the album, but does not take you direct to the disc, and with 100+ discs it takes some time to get through it! Is there a way in Roon to have a search take you to the disc(s) within an album that match the piece you are after???

think this was a problem before 1.8 as well

I don’t think so. If you tagged correctly roon would display on a single line regardless whether there was an album description or not like this:

Navigation of big 100+ box sets has been a running sore with roon since its origins. There have been many, many posts and its disappointing it remains unaddressed in 1.8. I do two things with box sets.

Roon seems to be trying to do something very similar to 2) with its newly re-designed focus feature. This allows you to navigate a box set by several dimensions including composition. This, I think is a welcome enhancement but it does depend on you identifying your box set at both an album and a composition level in the first place. Roon also inexplicably threw out the ‘OR’ when they added the ‘AND’, although I have seen a few posts that a fix is on the way. However, with many box-sets from large labels, the meta-data can be indifferent, missing basics such as composer so identification at a composition level can be a lot of work, especially with larger box-sets. Because roon does not provide you with the same editing tools for streaming and local content, fixing such a box-set may not only be a lot of work, it may be impossible. In these cases, the new focus functionality simple doesn’t work. That is also another disappointment for me about 1.8. Maybe there are copyright or other reasons why certain content editing features available for local content is not available for streamed content. I just don’t know.

This layout inconsistancy appears accross the board

The roon interface was never consistent. And it may never be.

Consistency and streamlined navigation is what many were hoping for most with Roon’s next big release. Personally I think they need(ed) to go to a tab type layout so that basic tools etc are locked across views (along the top, bottom and/or sides). Keep the whole pseudo ‘magazine’ experience in its own tab, albums, artists, playlists etc in their own, metadata editor in another tab, and so on.

As has been pointed out, when an album or boxset has a review, there is a different layout used. However, all the information is present on both layouts. Expanding the review will reveal all the additional information in the sidepanel to the right of the review.

As has been pointed out, when an album or boxset has a review, there is a different layout used.

Which is one of the one of the most childish (being nice) design errors!

when an album or boxset has a review, there is a different layout used.

??? this is exactly what the post says. How does repeating the OP in a different way somehow make it an ok design choice. Bonkers.

As has been pointed out, when an album or boxset has a review,

Well, eehhmm, yes. And thats exactly the problem to start with.

This is a problem for all genres and all types of releases.

Yes. My other weakness is the American Songbook. I find these sorts of considerations are often much worse in other genres.