I landed on the Genre Indie-pop, which shows 3 artist photos, under Artist Highlights and 5 Albums under Album Highlights as follows 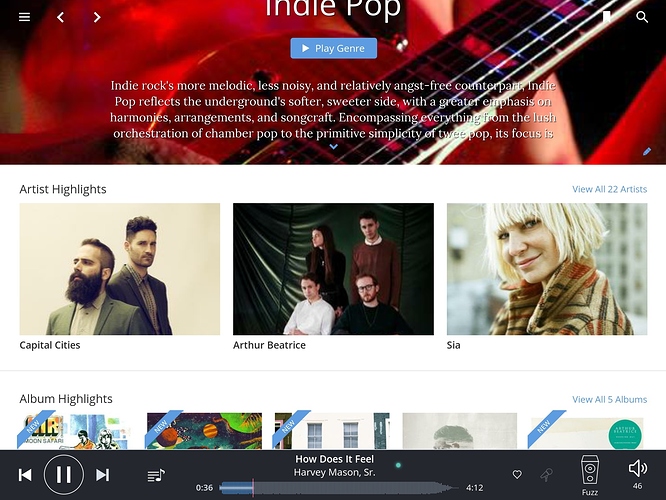 I was intrigued by and skeptical about the “View All 22 Artists” link. In fact when I click there, I see only 2 artists: 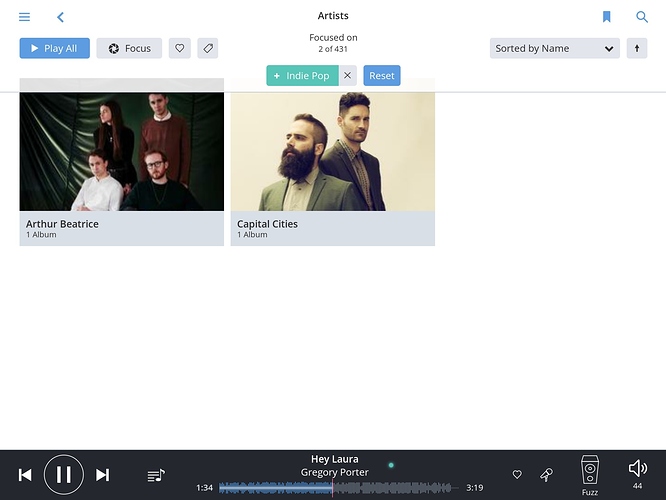 That’s because it counts artists attributed to that genre that contributed to any of the albums you own as an artist in that genre.

For example, if I look under R&B, and choose Sub Genre “Neo-Soul”, Sharon Jones shows up and counts as an artist in that genre. BUT, I have no Sharon Jones put into my system yet. It turns out that she subbed as a backup singer on the Gaslight Anthem’s “Get Hurt” album which is in my system. Yet she counts as one of the Neo-Soul artists in my collection. Something similar is probably happening to you.

I suspect you are right. In fact, Sia in the first above screenshot above shows up as a Performer on one album in my collection (confusingly not categorized as Indie-Pop at all!)

Also, I noticed that when I repeated the search for indie-pop, the first two highlighted artists are the same, but the third one is a new one.

Thinking about this more, I suspect this will work swimmingly with Tidal enabled. Maybe this can be improved to accommodate those who don’t use Tidal.

Well, the point I guess is that artists, albums and even separate tracks can be in different genres. I can tag the rolling Stones album Some Girls as Rock, and i can tag the track Far Away Eyes as country. Should I tag the stones as country because they have a country song?

I agree that how one arrives at the number of artists that represent a (sub-) genre is open to debate as you point out. However I don’t think it’s correct for Roon to offer a link that by all reasonable interpretations is going to show me 22 Artists but in fact only shows me 2.

Again, I have a feeling that with Tidal enabled I would see 22.