Incorrect metadata for Schubert symphony No 9

As a new user I have spent about a month introducing my collection into Roon, generally with excellent results but Schubert’s ninth symphony in C major has defeated me. I have several recordings but for all of them this symphony is shown as: Tracks 1-4 Symphony in E (“Gmunden - Gastien”) (=D944?) D849.
The four tracks beneath the heading are correct. Some time ago there was some confusion in the literature about the ordering of Schubert’s symphonies and the fragments under D849 were even recorded by an orchestra or two. However, this is now history - the correct catalog number for the 9th symphony is D944 and, as I say, the symphony is in the key of C major, not E. Interestingly, if I ask Roon to rescan the files, the correct information appears briefly on the screen before being replaced by the incorrect version. 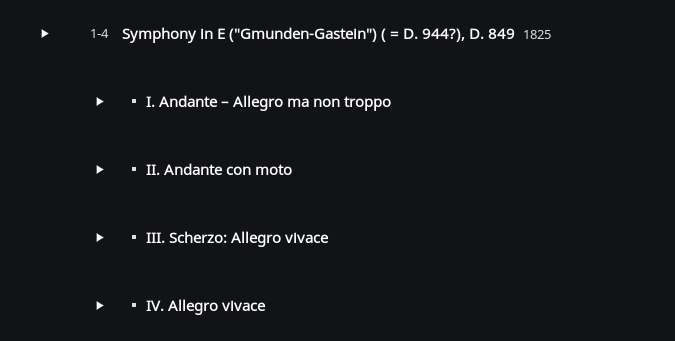 That’s very strange. All my 6 versions show the correct metadata. Did you look at the mp3tags of the files? Maybe there’s something wrong there?

Can you provide some additional information about what you’re seeing, as mentioned here?

Can you provide a specific example from an album that is experiencing this? 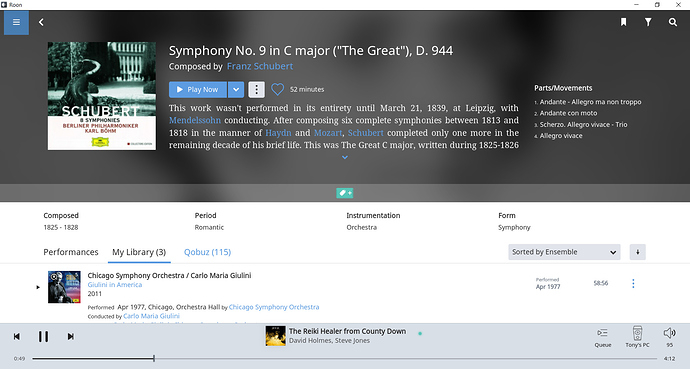 Roon, for example maps 115 performances of Schubert 9 to D. 944 in my region’s Qobuz (Ireland), as well as all 3 of my local library versions.

The reason there is this particular formulation of the work’s title is that roon uses the cannonical versions of work title names which can be found on allmusic.com. It is not uncommon for roon to fail to correctly identify a composition either in a local or streaming library. The usual reasons are missing composer metadata or uncommon (in the US) spellings of composer names, or metadata with a different formulation of the title to that found on allmusic.com (different order of the title, different key, different instrumentation, different opus and / or catalog numbers). Allmusic is using the same metadata sources as roon (Rovi / Tivo) so matching your metadata to allmusic is usually a first step when you get a composition identification failure as in this case.

Mostly these miss-identifications can be fixed by editing the work title and or composer with an external third party editor to comply with the allmusic conventions. Roon supports WORK and PART tags to get the hierarchy of multi-part works right which many “old-hand” roon users edit on a regular basis. I am not sure where or if how exactly to do that can be found in the roon knowledge base. But I am sure someone knows and can comment.

Now I look, I have 3 recordings showing this strange format, Furtwangler, Solti & Karajan

Plus several other looking correct as per Tony’s picture above

I can merge them but they are funnies …

Many thanks everyone for the replies - seems like a complex subject!
Anyway, this is to provide some more information as requested by Dylan.
The two albums in question are:
1.Disc 6 of Nevile Marriner’s set of the 10 Schubert symphonies with the Academy of St Martin’s in the Fields published by Phillips product number 028947088622.
2. A high resolution download (from Presto Classical) of the Dohnanyi perfomance with the Philharmonia Orchestra (Signum Classics) 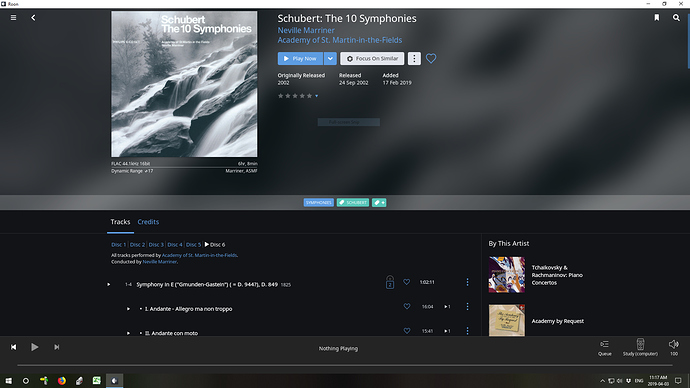 I do not recall any particular edits except for adding my own “symphonies” genre and a tag for Schubert to improve composer sorting.

Both those Schubert 9’s are available on Qobuz. When added to a local library (not downloaded), roon maps both to D. 944 as expected. However a separate issue is that roon does not automatically add the composer credits for the Marriner and those have to be added first before roon will make a composition id. This lack of credits when adding on-line content from Qobuz to local libraries has been raised in several threads and really needs to be addressed by roon as it is such a common problem. 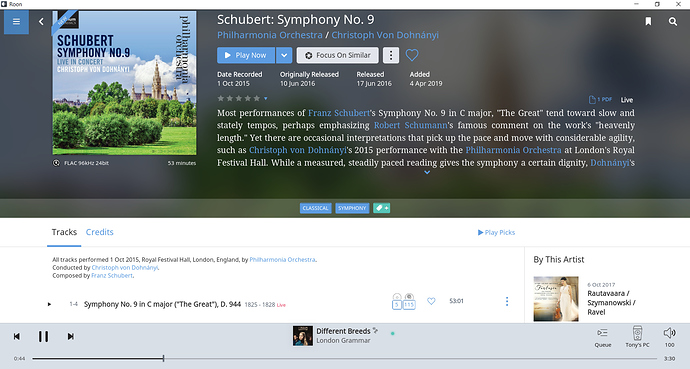 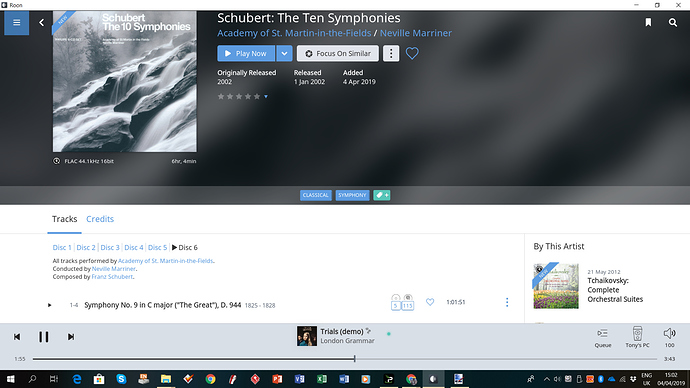 I notice that the Marriner Box Set has several obscure historical fragments orchestrated by Brian Newbould. It is possible that this or other inaccurate metadata in your Marriner download (or the other 7 versions you have) is confusing roon. This is not uncommon. The general state of Classical metadata from the labels and other on-line sources is extremely hit and miss.

When this happens roon gets confused. You will probably need to manually edit the composition metadata in your downloads directly in the files using an external 3rd party tag editor. This is difficult to do using roon as it’s metadata editing features are limited. In all likelihood, you are probably going to have to remove the albums from the roon library, clean the library (so roon retains no memory of the bad metadata), perform the necessary edits externally from roon directly in your files and finally re-import the albums. Again, this sort of procedure is not uncommon with roon although you can often be lucky and no manual intervention is necessary when you import your rips/downloads as seems to be your case up until now. Good luck

My Solti Double Decca is as bog standard a recording as they come but maps wrongly ??

I have merged them now , listening to it as we “speak”

Is that the “Legends” version with the Wagner Idyll? That’s the version Qobuz has and that maps ok as well. I can only assume there is something in metadata in download/ripped versions that are not mapping that roon doesn’t like. I find I have to manually edit virtually everything so I don’t find these miss-matches unusual in roon.

No its the Double Decca version 1996 , probably the same recordings reissued 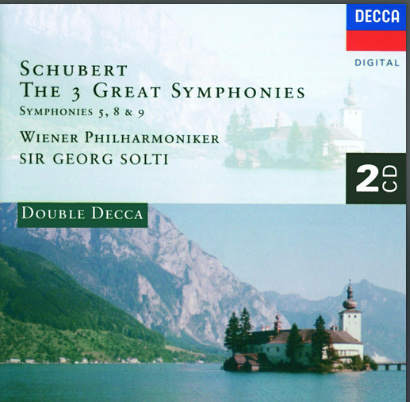 Its correct in MusicBrainz

I can’t find it in AllMusic unless I’m Missing it . Maybe the reason

Hello TripleCrotchet, For better or for worse, downloads from Qobuz are not an issue for me since I live in Canada. However, I have gone through your suggested delete and clean procedure, checked all the file tags with Tag&Rename and there are no problems anywhere. Even the Roon “display file information” gives the correct answers. Nevertheless, the incorrect identification still occurs no matter how many times I instruct Roon to use the file information instead of Roon information. That instruction is simply ignored. At this point I am about to give up - after all, I know what the music is supposed to be!
Thanks for listening.

Strange. I don’t have an issue with either of your examples. There are no guarantees but there are two things worth trying otherwise you will just have to wait for roon to respond. 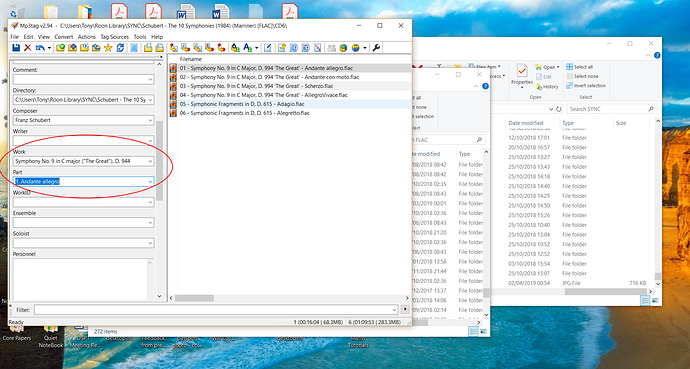 Otherwise, I don’t really understand why you are having such a different experience with identical albums. Unfortunately, with a Classical library you are going to find regular metadata issues like this as you use roon more.

Ok, that’s different. Did you manage to merge this one with a good composition? Did that work?

Yes most were correct, I just merged the 3 dodgy ones with the good ones

I see that your Schubert: Symphony No. 9 - Live in Concert album is unidentified. If you try to identify this album does it change things for you?

Indeed! It does change things. Thanks Dylan.
Your suggestion does resolve the issue with the Dohnanyi version.
Indirectly, it also resolves the Marriner version, which was not showing as unidentified, but if I go through the identify album procedure then the metadata corrects itself.

This process also partially resolves a similar issue I was having with two recordings of Beethoven’s 4th piano concerto: one by Stephen Bishop Kovachevich, Colin Davis and the BBC SO on Phillips and one by Alexis Weissenberg, Herbert von Karajan and the Berlin Philharmonic on EMI. I did not mention these previously since I assumed that a solution to the Schubert issue would also solve the Beethoven. In the event, the Kovachevich is resolved because there are different sets of metadata for the two issues of this album (1989 and 1997) but the Weissenberg is only partially resolved since it is necessary to “revert to the basic data on the files.” Why, or how this differs from simply checking the box to have Roon use the file data is beyond me.

To summarize, thanks again to everyone for their help and I am signing off from this topic.
Best Wishes all.