I am sending my 5.1 by HDMI out to my Cambridge Audio avr, and the sound is very good. Earlier I was using the internal DAC in the Oppo 103, but there seemed to be a problem., likely within the Oppo.

The only – only– external usb 5(7).1 DAC I have found that is reasonably affordable is the U-DAC 8 at $275. I know I would love the Exasound, but there is no way I can justify the expense of that device.

Anybody here have experience using the U-DAC 8 with Roon? On paper, this is exactly what I think I need. What do you think?

I am fine with the HDMI to HDMI solution, but I have a feeling there is a cleaner signal out there, if only I can find and afford it!

I use the u-DAC8 with Roon and it works great. Realize that it doesn’t do bass management or sound correction and, as of yet, no one on this forum to my knowledge has described how to use Roon’s own convolution filters or Dirac running in the Roon core to do multichannel bass management and sound correction. That is a problem that I still seek a solution to. My Marantz AV-7702 pre/pro has Audyssey XT32 sound correction built in, but it doesn’t work on the analog multichannel inputs which the miniDSP DAC must use. JCR

I don’t use bass management or room correction in any case. I assume you are good with the sound quality of the dac? And that it is as plug and play as advertised?

Did you buy yours from the mfgr?

Installing the ASIO driver for the U-DAC8 is a little finicky but, once installed, works very well. I reported on some recent tangential experiences with ROON and the U-DAC8 here: https://www.stereophile.com/content/music-round-85-nimitra-exasound-baetis-roon

[quote=“Jeffrey_Robbins, post:2, topic:27893, full:true”]
I use the u-DAC8 with Roon and it works great. Realize that it doesn’t do bass management or sound correction and, as of yet, no one on this forum to my knowledge has described how to use Roon’s own convolution filters …[/quote] ROON does do bass managment and implement correction filters quite well and…

[quote]or Dirac running in the Roon core to do multichannel bass management and sound correction. That is a problem that I still seek a solution to. [/quote]ROON will use DiracLive as its output which in turn, will feed the U-DAC8 just fine. I’ve been doing that for years.

[quote]My Marantz AV-7702 pre/pro has Audyssey XT32 sound correction built in, but it doesn’t work on the analog multichannel inputs which the miniDSP DAC must use. [/quote]Well, you can feed the Marantz from ROON via HDMI and use XT32, if you choose.

I am reading that an AISO driver might not be needed for my newest model Mac Mini.

Could be. Even better. I am not a Mac guy.

Both the web product page and the online manual state no driver plug and play for Max OS X .

Oh, @mitr Kal. I’ve been waiting for you to weigh in on these very points for a while.

I’m a multichannel mess at home. Let’s see if we can parse these issues out.

My current setup is:

In Roon, the miniDSP endpoint is set for 24/192, convert to PCM, 5.1 channel layout and channel mapping only.

The result: I have multichannel playing, with bass routed to my two subwoofers, but no Audyssey sound correction because that isn’t supported in the AV-7702 (and probably not in your AV-8802A, either).

One other preliminary. The Roon core server is also simultaneously running JRiver MC22, which I use to access remotely outside my home via JRemote (at least until such time as Roon supports iOS itself).

Now, in this setup, I would first like to try HDMI multchannel. I started easily enough – a single HDMI cable from the HDMI output of the Roon core server to an available HDMI input on the AV-7702. In Roon, I didn’t see anything relating to an HDMI input available. That is, my choices for “Connected to Core” in Settings/Audio are:

#5 is set up for my core-connected Meridian Explorer2 DAC (I had to try out MQA via Roon, did I not?). I’m assuming that is why #4 also appears. I understand #3 but not sure why it is MC20 when MC22 is what I run on the server. All side shows.

I rebooted the server and the AV-7702 and thought I saw a reference to Intel HDMI and so set up that Roon input. Turns out, it’s the System Output (#1 above).

I mapped the HDMI input in the AV-7702 to my CD input. When selecting that on the AV-7702, the television attached to the AV-7702 properly projects the MC22 home screen, proving up that HDMI video is outputting from the Roon core server to the AV-7702. All good.

However, when I try to play any music out through the System Output (now renamed as Roon HDMI), the software says it is playing the album, but it just rips quickly through the list of tracks and actually never outputs any sound. So, System Output is apparently not the correct choice.

I would like to return to the miniDSP U-DAC8 usage and your comments about how to use Roon for its bass management and multichannel sound correction measurements and filters after we first figure out my simple (hah!) HDMI issue here.

Thanks, Kal. I was certain I saw that Intel display notation and it now is gone. So, I will try rebooting everything again and look for it.

We will take up the more complex way after solving round one here. Cheers. JCR

Jeffrey, try some of the other endpoints listed under that computer. I had the same issue and only after trial and error did I find out which option was functioning as the HDMI input. 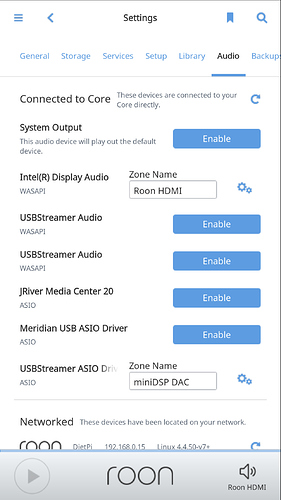 @mitr and @Goalline – as you can see, a reboot of the Roon core server again revealed the Intel Display HDMI endpoint. I set to use exclusive mode, 192/24, 5.1 channels, channel mapping and fixed volume. I named it Roon HDMI. All good.

When I selected Roon HDMI as my endpoint and played a multichannel file, nothing plays. Ugh.

Rebooting the AV-7702 yielded an even worse outcome – the disappearance of the Roon HDMI endpoint. Yup, the Intel Display endpoint no longer appears in Roon.

I will check it out in CT this weekend with the AV-8802A and get back to you.

Bad news. I cannot get ROON to output to the Marantz despite a lot of fiddling and, yes, JRiver does it with the same hardware.

I think we need ROON staff to explain and/or fix.

@mitr – Not that I like hearing that, but at least we have the same outcome on similar Marantzs. I’ve only been able to occasionally populate the Intel Display Audio device in Roon – as shown on my photo above – and even then, like you, I get no sound output. But, I do see the i7 server (JRiver) on my attached TV.

Roon team @danny – Can you please jump into this conversation for Kal and me? Thanks. JCR

Kal, off topic, but since I have JRiver running on the server as well, how would I play HDMI out through JRiver – at least to finally get some sound corrected multichannel through the Marantz! Should I be seeing the Marantz as an endpoint in JRiver (I don’t). Thanks. JCR

@mitr to be clear, your only connection between the Marantz and your server running JRiver is the HDMI cable. They aren’t connecting via your network for the Intel, correct? If so, I must investigate why JRiver doesn’t show the Intel, again as video via HDMI is working from the server. Perhaps something to do with Ausiophile Optimizer? JCR

[quote=“Jeffrey_Robbins, post:17, topic:27893”]
@mitr to be clear, your only connection between the Marantz and your server running JRiver is the HDMI cable. They aren’t connecting via your network for the Intel, correct?
[/quote]I do have both connections available and can choose between them. However, the network connection will only do stereo. The HDMI connection will do multichannel and that is what you want. You would choose it under Tools>Options>Audio>AudioDevice>

[quote=“Jeffrey_Robbins, post:17, topic:27893”]
If so, I must investigate why JRiver doesn’t show the Intel, again as video via HDMI is working from the server. Perhaps something to do with Ausiophile Optimizer? JCR
[/quote]Ah. Could be. I have never tried Audiophile Optimizer (nor its antipodean version). However, when I was playing with the Nimitra server which uses Fidelizer, it was necessary to activate audio output over HDMI manually.

@mitr Update. AudioPhil says that HDMI should work fine on AO. Given that the HDMI endpoint isn’t appearing in JRiver either, I wrote a note over at the JRiver forum. JimH suggested that since I have HDMI video but no audio, it must be a driver problem.

So, I returned the i7 server back to fulll GUI mode and dutifully uninstalled the Intel display driver from the i7 server, and then I reinstalled the latest available driver I could find for W2012R2. Same behavior. Video, but no audio and no appearance in JRiver or Roon.

I have a secondary PC running W10 in the same room and it is HDMI connected to the Marantz. That PC has JRiver on it as well. And the Marantz as an endpoint appears in JRiver. So, I tried playing a multichannel file. Bingo!

Side question, Kal. Multichannel files noted as 6 channel sound fine. Ones marked as 5 channel, such as The Best Of The Doors, mis-map the channels. Any explanation for this?

Meanwhile, I am now very confused about why the i7 server won’t see the HDMI. And other ideas? And Roon support, we are still looking for your input on Roon with HDMI. Thanks. JCR

[quote=“Jeffrey_Robbins, post:19, topic:27893”]
Side question, Kal. Multichannel files noted as 6 channel sound fine. Ones marked as 5 channel, such as The Best Of The Doors, mis-map the channels. Any explanation for this?
[/quote]If you are talking about JRiver, it is off-topic here

but make sure you set Output Format>Channels>5.1 (not to Source Number of Channels).