Integrating Roon with my personal Library -- how to find all versions of an album?

In my personal library, I often label albums so the bonus tracks are separated from the main album tracks (especially now that many online purchases lump everything together and don’t have “discs” anymore). However, I am having difficulty with this in Roon.

I set the Roon Import preferences to prefer “Album Title: File” and “Look for Version Info in Square Brackets”.

For a bunch of my favorite albums, I have the original version that I bought years ago and the newer remastered versions. I label them like this:

However, only the [Bonus] version shows in my Library. I can find the other versions if I search exactly for the entire album name, but if I just search Laid and select Albums, and toggle “My Library”, I only see the bonus tracks under Versions.

I would expect all 3 versions to be listed separately since they are the same Title, and only the square brackets are different and according to Roon, this square brackets setting is supposed to be used to differentiate album versions. Hmmm.

How do I fix this?

Ahhh well… never mind for now. I might have figured it out. If it’s still bothering me tomorrow I’ll update this thread.

For instance, with In Utero by Nirvana I have the following discs:

In Utero (the original rip from CD)

I do this because I want to be able to play CD 1 and only play the original album, with the bonus tracks appearing as their own “Extras” disc. With this labeling style it also keeps my collection properly alphabetized in JRiver (which I use mainly for library management these days).

On my hard drive, the folders follow the same naming structure as the album.

However, after going into Roon Settings>Storage and doing “Force Rescan”, In Utero [CD 1] Extras [24-96] is not showing up as its own disc which only has the bonus tracks. So I have no way of playing the 24 bit version of only the tracks from the original album.

If I change the Extras label to [Extras] it seems to work. But I’d really like to know why it’s not treating the existing naming as a separate album – if it’s using [] as identifiers then there should be an album named “In Utero Extras” in my library, right? And the “In Utero” 24/96 version Disc 1 should contain only the original album tracks.

I also just noticed that my Roon library says there is only 1 version. The original 16/44 CD rip is nowhere to be found. And under Settings>General I have “Show hidden tracks and albums” set to YES (everything on that page is set to Yes).

Try leaving everything as unidentified and just using your own meta-data.

Explain? I’m too dumb to understand…

I guess I should also say that my goal is to not really change my existing library too much – I don’t want to “Roon-ify” it because I might not use Roon forever and I also use a copy of the same library at my cabin, where I don’t have Roon set up (mainly because there’s no internet access, but I do have a WiFi LAN for Airplay streaming).

Here’s why I’m so confused. Sometimes I can find the version that I’m looking for, but it’s never listed under the actual Album Versions tab.

Here I see the 16/44 [Remastered] version listed under Tracks, but why is it not also listed in the top Albums area? Also tangent: Why does Roon cut off the name of the album in search results when there’s a ton of space for it? Terrible UI.

And it’s not under Versions either. 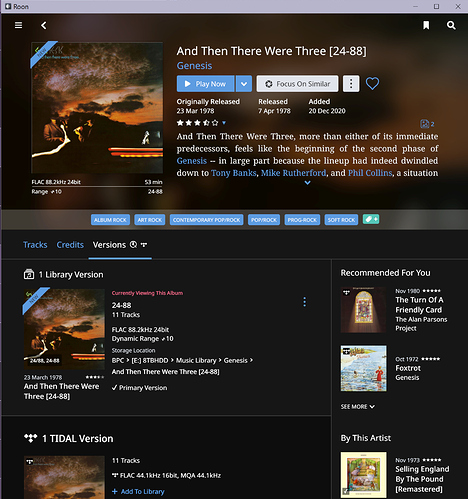 And now I notice that, at least in the case of this aforementioned Genesis album, if I search only for “Genesis” and then go to albums, both versions are listed. Why are they not both listed when I search by the album name?

But I don’t have the same luck with Nirvana – I still don’t see my separate In Utero “Extras” album listed separately under all of the Nirvana albums in my library. This is so confusing.

But for many albums that I bought years ago, I also own the newer remastered versions. Without labeling them in the album title, I lose track of which is which. That’s just one of the reasons I do it like this. I’m baffled why Roon is being so stubborn. It seems to work so-so if I label it like this:

In the first [Extras] case, it appears as a separate listing (but only if I go to the Artist page, then select All Albums). In the latter case, it appears that Roon completely ignores the Extras added to the album name, and all the tracks appear under the main album listing anyway – which is what I’m trying to avoid, so that when I play an album that has had extra tracks (demos, live versions, etc) added to the main album, I don’t hear them when I select to play the album. I want to hear it as the original track listing only.

Every other music management program I’ve ever used has had no problem listing differently labeled albums as actual distinct playable albums – whether it’s an album that officially matches something on Discogs, or it’s an “album” of extra tracks that I’ve separated out myself. Dunno why this is so difficult in Roon, especially since as far as I can tell I’ve set the Settings properly.

Roon will create versions automatically if the file path has [version name] in square brackets , anything outside the brackets is ignored or treated as a new album name

So if you name your folders

Roon will version them an group them , you then select what you believe is he Primary version

Roon can group the versions such that you cannot see them as separate versions, if they are identified.

I have this in my library

If I have them all Identified as Octopus by Roon, only the Octopus (Flat Transfer 24-96) is shown, the rest of not accessible.

If I then go and make them ALL unidentified (or really just leave 1 as Identified), then I can access them all. Unidentified means that Roon only uses your meta-data and brings in nothing of its own. You can see it in the pic below, right under Released Date: 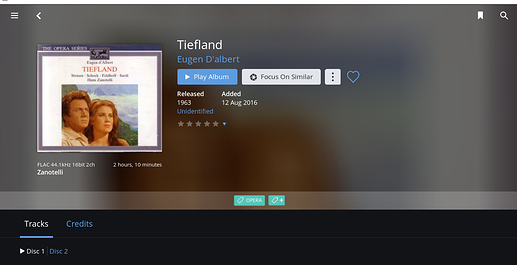 If an album is Identified you can go to Edit Album, Identify, and then Choose the “None of the Above Looks Correct” options until you are asked to use basic file information, and choose yes. Do that for every “in utero” album and see if things change. You can always re-identify the albums again.

Try going to settings and in the General tab, look for the hidden setting, just a guess, are some of the versions hidden, also there is a merge setting in the library tab, see if it shows any of the versions are merged.

Nothing merged, nothing hidden, nothing skipped. I’ve messed around with this for 2 hours before I posted a request for help – I think I’ve tried everything, and I still can’t make sense of what Roon is trying to do.

There is a Version metadata field for albums. Try that, and leave the album names the same, and tell Roon it’s the same album (as in an entity, not published version).

I’m actually starting to think this is a bunch of bugs in Roon.

Like what the hell is going on? Here’s what happens when I search my library in JRiver for “laid wah wah” vs “laid wah wah” in Roon. I have Roon Settings set to Prefer File for “Album Title” “Track Media Number” and “Track Number”, and “Look for album version in square brackets”. From any reasonable understanding, this should use MY album versions, MY disc numbering, and MY track numbering. But it clearly doesn’t. It seems that these preferences should allow for a sensible balance between my own numbering / separation schemes for these types of deluxe / bonus albums, vs having to go through and individually “unidentify” each album. 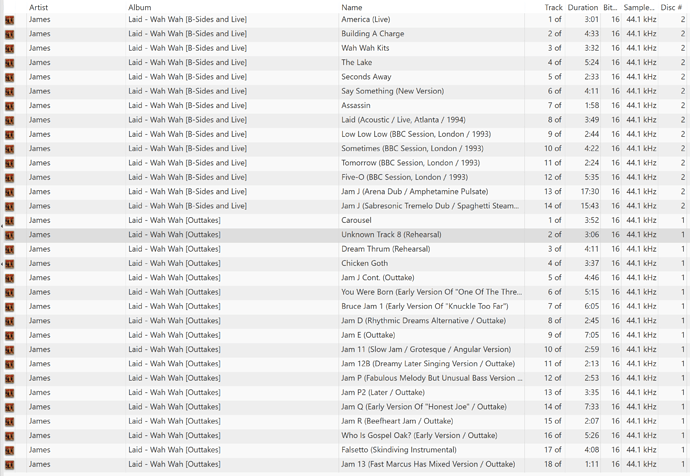 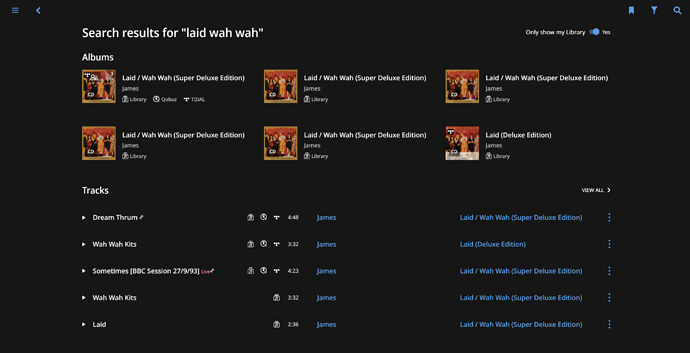 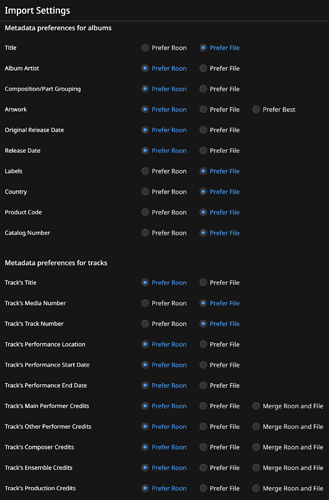 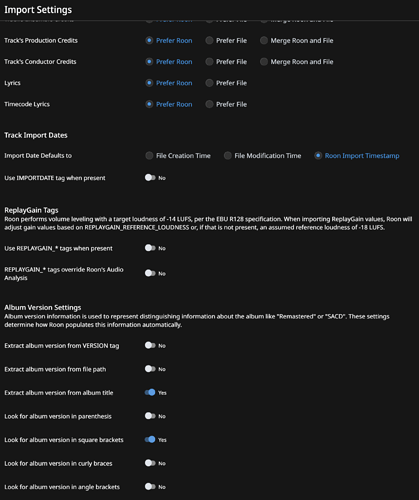 An example from my collection: I had the CD-rip of Radka Toneff´s “Fairytales” in my collection. I then added the new master from Tidal, called “Fairytales - Original Master Edition (Mqa)”.

Different names, does show up as two different albums, not versions of each other. And if I recall, just one is showing up.

Solution: Go into the metadata for album, type in “2015 remaster”. Then rename the album to “Fairytales”. Voila! The album is def not named something with master or Mqa – its name is “Fairytales”. Period. 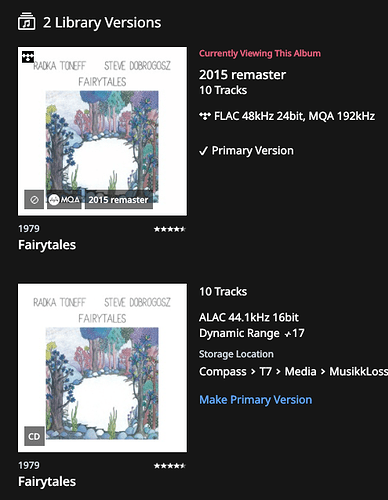 Should not [Outtakes] be another disc within a version of the album (like Super Deluxe Edition), not a version in itself?

So looking at your original post, I would guess that “Original Master” and “Remastered” are two versions, but “Bonus” is not a version in it´s own, but should be another disc belonging to one of the two former, probably “Remaster”.

Yes, you are generally correct – e.g. the bonus tracks are sometimes part of “Disc 1” of a remastered version original album. I want to separate them out so that I can easily listen to the original tracks without hearing the bonus tracks. Some deluxe releases do this properly, where Disc 1 is only the original album, and Disc 2+ are the bonus material. But many put it all on one disc. I don’t always want to hear demo versions or live versions at the end of the album, so I reorganize these discs so that the bonus tracks are on a separate “album” (as defined by me). In every other music player I’ve ever used, this is not a problem, and I don’t understand why Roon isn’t doing it, given that I’ve set the Settings in a way that supposedly should do what I want.