Today I applied the 2.573 update to all of the devices and I also rebooted the server which is a NUC83i running ROCK (the music files are on a Windows share). But, the issue remains.

Harry, If I run a feedback on the Rpi as soon as a dropout happens and supply you with the time it happened would you be able to see what caused the dropout?

To what, and how are the three RPi’s connected? I would say therein lies the problem.

Good point, I forgot to mention that all 3 have a wired ethernet connection. Nothing is on WiFi. In fact, the Rpi4 is on the same network switch as the server.

I use this same network to watch 4K video files on the same Windows share and on the same switch as the NUC & Rpi4. These are often streaming at 40Mb/s or more and without any issues. So, I feel that streaming a 44.1/16 flac file should not be an issue with connectivity or bandwidth.

It almost has to be network. Dropouts on three different RPi’s. I have three RPi’s running RoPieeeXL with zero dropouts. Actually, I only have two now since I sold one. Harry will figure it out.

Also, might work better if music files were on the NUC or an attached USB drive.

You could be right, but moving my library to a local drive on the NUC isn’t trivial. Hence my question if Harry would be able to supply me with some hint as to what caused the dropout.

Can you put an album or two on a thumbdrive and plug that into the NUC and point roon to the thumdrive as another music source and then play from that? It would eliminate the windows share as the issue.

I doubt that will solve the issue, but it would eliminate one potential contributing factor.

Can you send me feedback please?

About 3 minutes in on the track called “Yo Go Jo Po” it had a drop out. I don’t know if your logs have a real time clock, but if so it was at around 17:05 local (Pacific) time.
This is a 96kHz/24bit flac file and was connected to the Marantz HD-AMP1 via USB 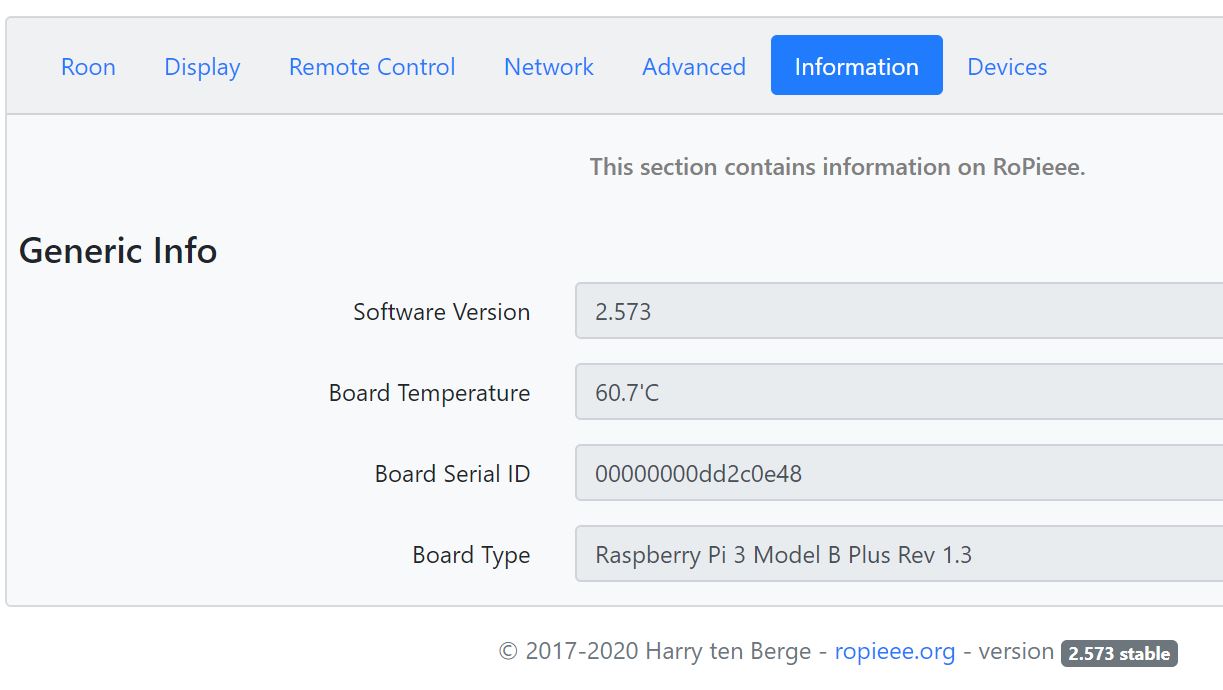 In essence everything looks ok, except that indeed RAAT (Roon) is mentioning that the device is gone.
But I do see quite a few ‘undervoltage detected’ warnings, so my suggestion would be to first have a serious look at your setup, specifically the power supply.

So, there was no indication of a problem with accessing the file from the server? On the one I sent you it briefly lost connection with the DAC - right.

The undervolatge alerts have to be bogus as I have a 5v power supply rated for 5 amps. Way more than it requires.

Thanks for looking into this for me, but it looks like I have more detective work to do.

No nothing of that kind.

I discovered the cause of the undervoltage alerts. I forgot that I had an iFi DC iPurifier in between the power supply and the Rpi. I took that out and no more random yellow lightning bolts. I guess it was dropping the voltage somewhat.
However, the intermittent dropouts remain. I’ve had 3 in one song (It’s a Raggy Waltz DSD 2.8mHz)
Feedback 80fadf2755fd893a
Is it still losing connection to the DAC?