Although the slow album loading issue has been resolved, I’ve noticed that both my remotes are now much slower to connect to the Roon core (5-7 seconds, where this used to be ~1s). Perhaps a new topic should be opened, though it is likely related to the recent remote fixes in Build 223.

Hi @JWC ----- Thank you for the feedback! I went ahead and moved your post into a new topic so we can address this behavior more directly

Can you confirm if you have tried reinstalling the remote application on either of these devices yet?

I have reinstalled the remote, rebooted the core, and rebooted the router. The long reconnection time remains. Usually, the dancing jellyfish times out, and the “Lost Connection!” message appears for an additional 1-2 seconds before the connection succeeds. Once while waiting to connect, I tried pressing the button to search for other cores (I only have one), and saw the attached message indicating that the core was still “initializing.” That may or may not be usefully diagnostic. Both the core and remote were previously running, and this was during a reconnection from a sleeping iPad. A few seconds later, I could again connect to the core, but every time the iPad goes to sleep, this process repeats. 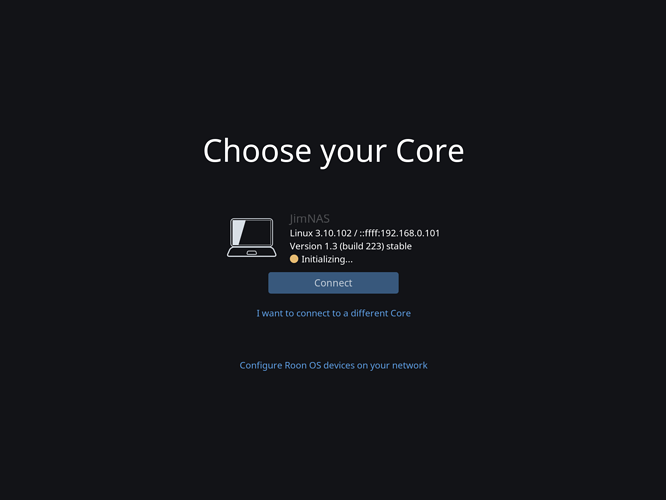 I find closing the app and then re opening gets a connection a lot quicker.

Hi @JWC ----- Thank you for the follow up and sharing the results of the reinstall. Sorry to hear that the reported behavior has persisted.

Have you by chance given the suggestion made by Chris a shot? If so, did you make the same observation?

Moving forward, can you briefly describe your network configuration/topology for me? What type of networking hardware are you implementing in your setup? Also, during your troubleshooting, have you tried (temporarily of course) hosting your core on another device? For example the 2011 MBP? What was the remote connectivity like under that configuration?

I don’t see a huge difference closing the Roon app on the iPad vs connecting a while after things have gone to sleep. With some further experiments, the iPad remote is chronically slower to connect to the Synology core than the MBPro remote

I tried @Eric’s suggestion of comparing the core running on the 2011 MBPro. The iPad remote connection response is much faster in that configuration, ~1s instead of ~6s (even with both MBPro and iPad on Wifi). I realize the Synology is a bit under-specced for Roon, though a new 2.4GHZ quad core Atom vs a 6 year old 2.2GHZ quad core corei7 laptop sound similar enough on paper.

It is also true that the Remote connection to the Synology core was distinctly faster in the recent past. I wondered if whatever remote tweaks made album loads faster has inadvertently slowed the connection times on either a) under-specced or b) linux systems.

I’ll also send a PM with connection logs in case there is anything useful there.