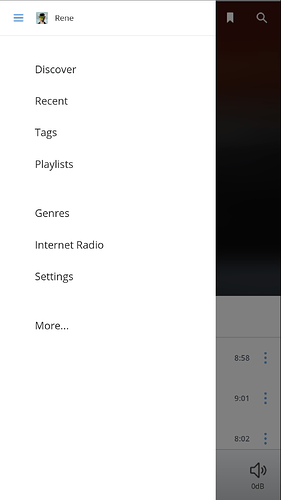 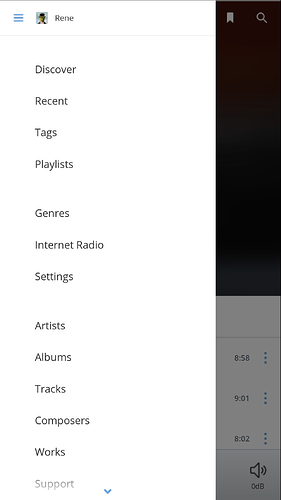 You can get there by selecting ‘more’ from the menu, then artist.

Its odd the menu’s are different…. The things I use most like artist and album are down at the bottom…
Still who cares - we’ve got an iPhone remote!!!

@RBM, always one step ahead!

The more I use the iPhone app, the more I value and use Discover and Recent – far more than on tablet or desktop remotes.

With Artists and Albums, the limitations of the small screen lead to endless scrolling. I find myself using Discover, Recent and Internet Radio more often on iPhone, quite happily. I’ve well eh… (re)discovered more of my library on my iPhone than on my iPad. But, of course, that could just be me.

Super excited about this. For me, there were a few quirky things with getting native DSD working again, but I fumbled my way through it. As found in another post, had to select an alternate playback than Native, then go back to Native. Working now!

The more I use the iPhone app, the more I value and use Discover and Recent – far more than on tablet or desktop remotes.

Will give them a try. Actually a ‘Recent’ menu on the iPad would be nice. I often go to history or albums>sort most played/date added which tends to be current favourites (I’m lazy and take a while to add recent favourites any other way). I could see myself starting there instead.

I haven’t used the radio feature for a while but since it turned itself on after the update I’m liking its choices too much to muck around with my iPhone remote. The irony.

Where is the TIDAL section on the iPhone remote?

Actually a ‘Recent’ menu on the iPad would be nice.

Yeah, in some ways the phone apps are a preview of changes we’re considering for desktop.

For now, Recent is phone-only, but we’re watching feedback closely, and I’ll mention that there is a View All link above the Recent section of Overview, in case you missed it. Not exactly the same, but similar.

Where is the TIDAL section on the iPhone remote?

We haven’t included the TIDAL section on phone yet, although you can search TIDAL and access your playlists.

Adding TIDAL to the phone app in a future release is definitely something we’re considering, so be sure to post in Feature Requests so we can gauge interest.

Thanks for the feedback guys!

Hm - I’m kind of confused - why would you not have everything on the phone remote app you have on the iPad / desktop version? I certainly would expect to be able to browse and trigger playback of TIDAL content from my phone - seems arbitrary to take this one thing and remove it from the iPhone remote

There are a few things that didn’t quite make it into the first phone release, mostly due to time constraints. We could’ve waited another month, but we decided to release with the core feature set and see what kind of feedback we get. Keep it coming!

This app is tremendous. Much more than I had hoped for. Well done. You may have gotten Roon anotther lifetime subscriber with this.

I expected just a basic remote and feel like I have full-fledged Roon. I especially like the app opening in discover mode and not recent. My feedback for the future is to keep it simple, don’t put too much in it. We need something very user friendly, intuitive and fast. I am willing to sacrifice features and content for functionality inn an iphone remote.

Fantastic app. One crucial thing that is missing is under ‘albums’ - here it would be great to be able to pick one’s favourite (heart) collection. If one has 7000 albums in the library like me (thanks to tidal) - then the album category is a bit unhandy on the iPhone, but if I could narrow the selection down to my favourites it would be perfect.

Guys, thank you thank you. This is all I ever wanted. Offcial no parallel on planet earth.

i wonder why the app is not compatible with the iphone 5?
just to pilote a remote application ???

i wonder why the app is not compatible with the iphone 5?
just to pilote a remote application ???

This was not an easy decision, but ultimately we couldn’t justify the significant amount of work needed to make Roon work on 32 bit iOS devices.

More detail about this decision here.

Superb, any thoughts about integrating Qobuz for us in Euroland?

I’m very pleased with this initial release. It’s pretty much all there from my perspective, but I’m sure others will nit pick it. I can stop carrying my Mini 4 everywhere I go around the house!