Hi,
In Artist Editor i see an “Is Classical Composer” checkbox?
I presume there is some differences on how metadata are managed if artist role is classical composer but interested in details.

As far as I can see it affects primarily whether the composer is listed when you use Composer Browser - Classical Composers Only.

I am not aware of any other effect, but @joel can clarify, I think.

Yes, but only works effectively if this “Is Classical Composer” checkbox has been groomed.

Yes, but only works effectively if this “Is Classical Composer” checkbox has been groomed.

Really? It should work out-of-the-box with of the order of 10,000 composers who are already marked as classical by our metadata services.

[quote=“joel, post:6, topic:19711”]
Really? It should work out-of-the-box with of the order of 10,000 composers whom Rovi deem to be predominantly classical.
[/quote] Yes @joel, “classical” composer appears in restricted list from the composer browser even if the GUI “Is Classical Composer” is not set. So what is the Artist editor checkbox for if the setting is from ROVI ? Use case ?

Hi Bruno, it’s to allow you to unset a composer from being “classical” if you disagree with the Rovi value.

Thank you @joel it is what i presumed
But the GUI is strange because all my classical composers are set to NO in the Artist Editor popup and correctly displayed in the composers browser restricted to classical view. 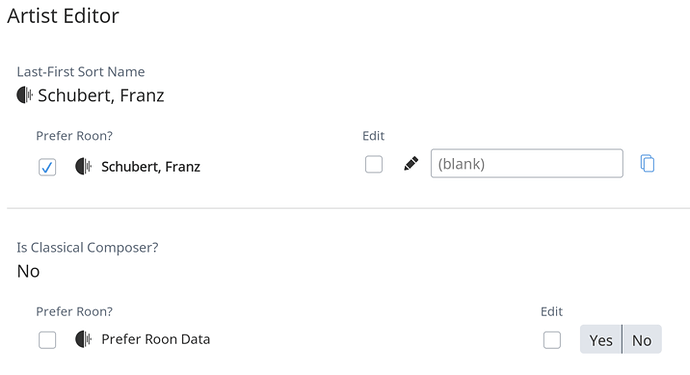 Good spot; I think that is a UI bug! I’ll add a ticket to get this fixed.

Sorry for any confusion.

We discussed this before. I did another spot check: my first screen of 15 includes in reality 11 classical composers. When I flick the switch, only 5 of those 11 are displayed. So more than half of this specific Rovi metadata on that screen is incorrect.

It’s a great feature! But it would need a lot of grooming for it to be useful for my library. Other libraries are also available.