Is my folder structure of database under Roon correct? [answered]

In backing up my Roon folder on the Core last night, I noticed what I suspect is an oddity–I’ve got folders for Application and Cache BOTH under Roon and as sub-folders under Database (see below). There appears to be some duplication of sub-sub-folders, but they are not identical, and the folder/file dates do not help sort out a clear map of which is ‘correct’ or ‘incorrect.’. My fear/suspicion is that the syncing program that I use for backing up (GoodSync) reverted to two-way “synching” at some point for this job rather than the straight back-up (one directional) synch that it is supposed to be set to.

First, is my folder setup in fact incorrect? And, if so, how do I ‘safely’ mend the structure?

Just wondering if anyone can confirm whether my current folder structure under \Roon is normal or atypical, so I know whether to pursue this question or not? My fear is that it’s not right and will eventually lead to a massive database problem…

No, that’s not right @jpowell. It looks like a second copy of your database got copied into the database folder. It should look like this: 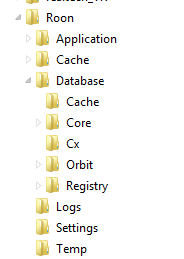 Is that your backup, or what you’re currently running?

Are you using OSX?

@mike, it’s what I’m currently running—because I suspect (as mentioned in my post) that it was caused by my backup job in Goodsynch, which somehow got ‘reset’ apparently to 2-way synch mode rather than the 1-way backup/synch mode that I normally have it set to. I’ll have to adjust the folder levels so that something like this can’t happen in the future—apparently I have them offset by one level.

I guess the immediate question is how best to fix the situation without losing all of my metadata fixes and customizations, etc.?

Ok, understood. Why don’t you quit Roon and make a manual backup to start, just to be extra safe.

Just copy the entire Roon folder somewhere else by hand in Windows Explorer. You can select it, right-click, Copy, and Paste it wherever.

Then, go into Roon/Database and move the following folders somewhere else outside your Roon folder:

After that, your folder should look like mine. Just launch Roon and let me know how it goes.

Thanks, @mike, I’ll do as you suggest when I get home tonight and let you know how it goes.

Mike, I did as you suggested last night and it seems to have all come up correctly afterwards. The first time I restarted Roon, it did seem to hang while doing some new track level analysis (got stuck on 2 of 71), but after closing it out again and restarting it, everything went smoothly!

I’ll monitor the files and folder structure for a while–and make sure I’m pulling proper one-way backups again–but I think I’m good to go. Many thanks for your assistance.