Roon did nothing to prepare Apple users for this. They were not proactive in any way.

Don’t know if this is true or not - maybe they’ve update the build environment already or maybe they had to wait for third party stuff to get Mojave ready first or maybe … whatever.

You can certainly make all kinds of excuses for this lack of action.

I’m not making any excuses on behalf of others. Just communicating my thoughts.

But there is no good reason to surprise customers in this way.

On the other hand, customers have to surprise themselves, don’t they? You’ve to initiate the update to Mojave - it’s not rolled out automatically or is it? So the impact may not be as tragic as you imagined it - another probable calculation for this fail.

BTW: one could ask if it’s reasonable to update to a new OS version on release day. I remember the saying once used for Windows: never do it before SP2 …

It has been a few months I think since the last update, so we are probably due one soon. Final testing for release cannot take place until Apple actually release the final version. A sensible approach therefore is not to update straight away to new Apple releases. This goes for IOS as much as it does for OSX. Apple simply can’t be trusted these days not to break their own hardware.

Just updated to Mojave, no problems with Roon.

All (loving) snark put aside, I am, however, curious as to what is it that Roon needs, or rather, needed, in accessibility ?

Listening to media keys on the keyboard so that they can be hooked up to Roon’s transport controls. The new Roon build makes this support optional, and includes a new flow in the UI to help people get it enabled with minimal friction/trouble.

We scheduled this week’s Roon release around the new iOS devices + Mojave release since both require some “running in place just to stand still” stuff on our end–as with most Apple releases, and we like to see the stuff run with real builds before it goes out.

The media keys stuff was pretty involved–required new screens, new OS interfaces to use, etc. We just got our hands on a new iPhone Friday afternoon and added support over the weekend, then got that moved into App Store approval, which adds a calendar day or two.

In any case, we have a build coming out soon. So going to get back to work on that

Roon Crashing on Mojave. Is there a update coming soon? If not are we going to be prorated?

Yeah same here. Thought I was doing the smart thing by upgrading this morning and now I’m stuck listening to iTunes. BARF

Thanks for taking the time to explain this - didn’t realise how flexible Apple had made their definition of “control your computer”.

(and @Matt_Simpson) - Roon crashed on launch here, the steps described here and there fixed it though, worth a try if you haven’t already.

If you would like to continue using media keys on your keyboard to control Roon, you’ll need to click Grant Permissions on the Setup tab in Settings. Note that this step is now required even on older versions of macOS.

You can read more about this update here:

Thought I was doing the smart thing by upgrading this morning

It’s never smart to update to a new OS until YOU have checked that ALL the software you use runs correctly on that new OS. I have numerous software applications that don’t get updated until a new MacOS is actually released in the wild.

I never usually update until a .2 release and have learnt this the HARD way.

I might normally agree with you, but I work for the company and have been using Mojave internal builds for a year. The only piece of software I don’t run on my testing machines is Roon and low and behold it’s the only app crashing. So there is that. But the fix was easy enough

A post was merged into an existing topic: Roon 1.5 build 354 missing Display options

Thank you for an extremely fast resolution, and new features

Thought I was doing the smart thing by upgrading this morning

Might be a good idea to quote the right person!

Not sure what’s up with the scolding of other users here. We should all wait and then maybe one unlucky schmuck let’s the rest of us know it’s not working? Nah, give me a break. They’ve known about this for months and got an update out a day after the release.

Clearly the workaround was easy once I found it, but it wasn’t communicated to users ahead of time with no release issued in the interim for it. I’ll never wait to upgrade an OS that provides improvements just because ONE app wasn’t updated properly either. That’s not how everyone operates. Guess we’re not all “smart” though

I’m not sure if it was only one app that wasn’t Mojave ready for just one day.

Anyway one could probably argue (endlessly) if it’s the best thing to upgrade to a new OS version on release day. In professional environments I wouldn’t really recommend it - for consumer grade stuff “on the forefront of technology” it may be a different thing but I’d say it still heavily depends.

I have had no issues so far, 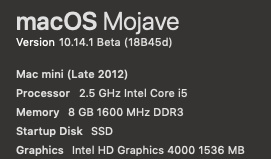