Is Roon not reading my "Releasetime" tags?

All my files are ALAC files and they are all tagged using the same application, but Roon usually won’t show the release date I tagged the files with, but uses the “year” tag instead. Even in the album editor, the release date it says I tagged my files with is not what I put. The “Originally Released” dates work perfectly. Here is an example. The 2011 Remastered release of Gish by The Smashing Pumpkins. I have the Original Release Date as 1999 May 5th, which shows up fine. I have the Release Date tagged as 2011-11-15 but the album editor says that my files are tagged as 1991 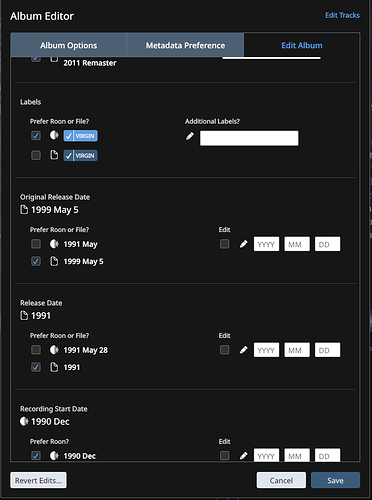 Yet if I go to one of the tracks and go to “view file info” and then click “file tags” the Release Date I have entered in my files is correct, so why is it not showing correctly in the album editor or on the album page when I select to use information from my files? 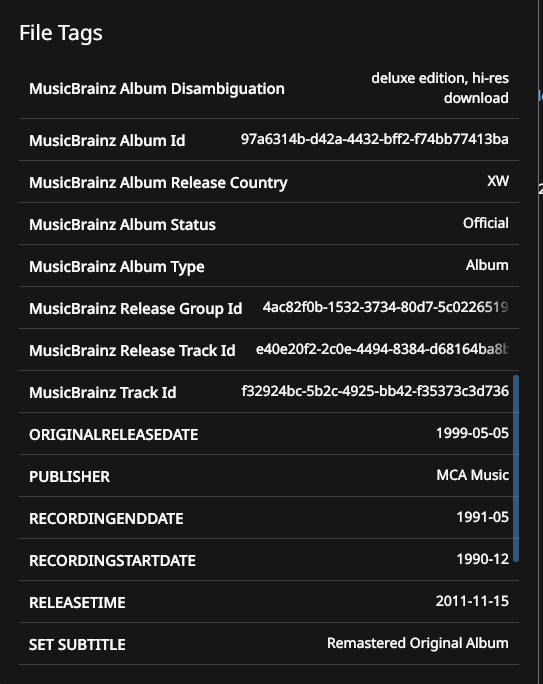 It gets properly tagged as “Releasetime” and shows up here, so why is it not being read?

Can anyone, or anyone @support help figure out what is happening. Do I have to tag my files differently? Or is the “Release Date” in Roon taken from the ©day tag in my files instead of the RELEASETIME tag? Is this a bug or is it meant to work like this?

Also, are the metadata issues I reported being looked at? Will any of it be corrected? Should I send those to Rovi/Tivo and Allmusic instead?

Can you send us one of these files? You can upload it here: https://workdrive.zohoexternal.com/external/5dHjIc9hgTv-LVTzf

Also, are the metadata issues I reported being looked at? Will any of it be corrected? Should I send those to Rovi/Tivo and Allmusic instead?

All metadata issues reported are tracked and investigated. These issues can be tricky and can take some time in some cases. Sometimes we need to reach out to a metadata provider, and other times we need to make changes to Roon or our cloud services. In all cases we review and use the reports to make Roon metadata better.

For cases where there are obvious errors on AllMusic those can be reported to them. Similarly, MusicBrainz data can be edited by anyone and those corrections will make its way to Roon.

Hey @Dylan,
Thanks for getting back to me. I need to talk to someone about my account and the blurry images thing that has been going on. Can someone privately message me? I need this done before I get recharged for my yearly subscription.
Thanks

As for the Release date vs original release date vs year I think I have it figured out. I was working with Barry, who makes the tagging app Yate and for ALAC files at least, Roon will read "ORIGINALRELEASETIME from my files but it will not read “RELEASETIME” and defaults to use the “YEAR” tag instead. But if you use the tag “RELEASEDATE” instead of “RELEASETIME” everything works as it should. Many other programs need the “RELEASEDATE” tag though so I will have to modify my files accordingly. Is there a complete list anywhere of what tags Roon reads and uses and exactly how they need to appear? I don’t just mean Credits and Roles, but all tags for each format? Thanks

As per the metadata mistakes, I originally tried to report them to Allmusic and go onto their webpage to edit the data. But when you do this, you get a pop up message saying that you cannot edit any data directly and that you have to write to ROVI/TIVO to change the metadata. I haven’t heard back from them yet. I am just curious, but cant you guys simply override incorrect metadata and images and just replace it with correct metadata, like a user would do?