Is Roon of Value to Me?

spot on. sometimes just telling people that I spend more on a piece of software to listen to music on top of my annual music subscription makes me feel like a fool. I renewed my year right before the price increase was announced. I am not doing this anymore after this year. It’s absurd. If Qobuz comes out with a Qobuz connect I think roon could be in trouble. Software like this should get cheaper as it grows, not more expensive. Roon lifetime subscriptions should come included in a 5k amp or dac/streamer. I think thats where all this ends up eventually when they get bought by a big hardware maker. It won’t be too long a real open source good alternative to roon comes along that is as easy as roon to setup. Love roon but these price increases are not justified. It just crossed the threshold point for me that I’m willing to spend a whole weekend wrangling open source software to replicate what roon does for free (90% of it and 99% of what i actually use)

Judging the age of many Rooners here it would seem that we are quite the ancient lot
Jim_F (Pragmatic Minimalist - Roon Lifer X 2) January 4, 2023, 8:57pm #2

Why did you renew for another year?

time to research and dial in the replacement software stack. I didnt want to mess with all that during christmas time and it seems that stuff that can tap into qobuz and is opensource is being more and more these days. Another year for that to mature and it should be polished enough to leave roon in the dust

I think of Roon as a component in my system(s) and it’s exactly that- just because it’s software doesn’t lessen its value (in fact, that’s why it’s so impressive).

The inclination to compare its value to that a single streaming option does make it seem absurd, but when I divide my overall expenditure on Room, NUC and endpoints by the number of endpoints (plus mobile now!) and compare it to my outlay on other electronics and speakers (which, to be clear, are all firmly on the budget arena) it really doesn’t look at all unreasonable.

Guys, I’ve moved these posts to a new topic of their own, they were getting off-topic in the original thread which is about the age of Roon users…

cool sorry I went off topic too much

I don’t disagree with what you’re saying for me its just the value proposition tipped over the line for me with this increase. I have maybe 20 albums on my network and mostly just stream Qobuz. I’m not really comparing this software to a piece of gear in my system. I’m comparing to other software and its very expensive in that light esp compared to free open source which dominates this space. If you’re only competition is volumio and free open source it gives little incentive to compete on price. The main value is qobuz playback for me and I can do that in other ways. I have invested in a bunch of Raspberry pies and have end points all over the house. I can still use all that with free opensource alternatives and is why I bought Pis to begin with.

Judging the age of many Rooners here it would seem that we are quite the ancient lot
Placebophile (Jeff) January 4, 2023, 9:18pm #9

Then I’d agree for your use case Roon might be more than you need.
But for those of us with large local libraries, who also use streaming services, have multiple endpoints and play to them simultaneously and value the metadata integration, nothing else comes close.

Good luck! (from someone who used exclusively Linux at home since 1993)

It really comes down to personal value. We all have different incomes and hobbies. We all have an idea of what we think is ok to spend. And we have options. Sure I can pay for bread service and wake up with fresh bread at my door or I can go to the supermarket, or go to the organic centre down town.

Some people absolutely need/want the features Roon provides and others don’t.

Whether it is a good value is purely subjective.

Whether it is a good value is purely subjective.

Yes, but users who pay for Photoshop although they don’t need it should also be careful when declaring that obviously it’s too expensive and GIMP does just as well.

Before taking out a Lifetime sub I spent a couple of days looking at many alternatives, including free open source software. Nothing came close to what Roon is offering. Whether you feel the same, or not, will be down to the set of features that you want/need.

I came from using Spotify to find content and listening with tidal app. Roon did replace that 100% and added double the content. I can afford that convenience but it is not a piece of cake. And like all the fine things it is addictive as long as I can maintain the price.

Bread is highway robbery! Do you know how cheap you can make bread. Flour, water, yeast, and salt…come on…get real.

You guys are right and I appreciate you entertaining my conversation. I agree I should not complain about value if I’m not using a lot of the features that make it worth it. Really it makes me want to take myself deeper into the hobby and learn to use all the other things that would get me the full value but life does not afford that extra time at the moment. That’s the real rub hey

I got a year to see if I can figure out and then live with the inconveniences of FOSS.

I therefore change my tune

Just consider it the cost of doing business. Sometimes we have to spend money and even make mistakes to determine if the value is there. I have two software subscriptions that I will not be renewing, but I needed to do an extended use test to determine that.

And so it goes…ya pay your money and take your chances.

After around two years, I paid up for a lifetime subscription. Sure, there are one or two things that could work a little better in Roon - I still find the search function perplexing. I can’t find an artist/album via search, yet can find it in Qobuz, add it to my library and it pops up in Roon…

For me, Roon is now one of life’s essentials. The information available, artwork, lyrics, ability to display what I’m playing on a 65" TV, control from numerous devices, ability to apply room correction DSP, headphone correction etc. But best of all, I think, has been the contribution Roon Radio has made to broadening my music horizons.

Mrs. Mad Scientist is away for the night - staying with a friend in London to try to mitigate some of the rail strike chaos and spend a decent portion of the week in the factory she manages.

That means the lounge and hi-fi has been mine for the whole evening. I started off on a Natalie Merchant daily mix, which eventually led me to a track on an old favourite album of mine - Holly Cole’s ‘Temptation’. I listened to the album, revelling in the way it sounds post room treatments and REW correction, followed by another by Holly Cole album - ‘Romantically Helpless’, Roon Radio took over again and led me through a plethora of female jazz performances, one of which was a cover of Soft Cell’s ‘Tainted Love’ by Stella Sarlight Trio. Never heard of them before today. Apparently a trio from Indonesia - vocals, musical arrangement and production are very good. Off I went into the rabbit hole and three of their albums later, it’s nearly bed time. There was takeaway pizza delivered, a glass of wine imbibed and the dog asleep on my lap for the duration.

After a very stressful on-call week spanning the New Year weekend, it was just what the doctor ordered. 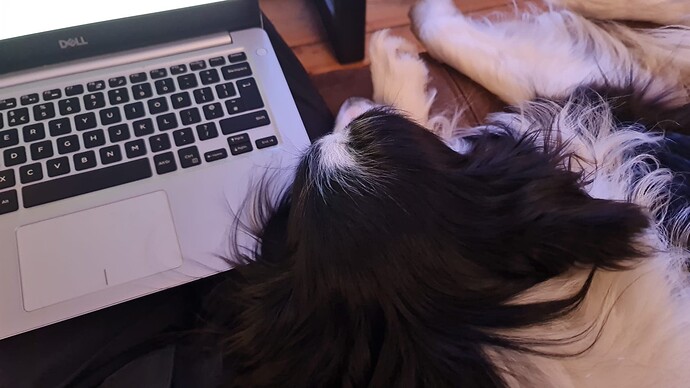