Is the writing on the wall for allmusic.com?

Twice now in the past 6 months allmusic has blocked access to its site if you’ve adblocker installed, suggesting paid subscription as the alternative. I principally use it to track new releases from artists I follow, so usage is infrequent and insufficient to justify subscription. On the other hand, no way I’ll stop using adblocker. 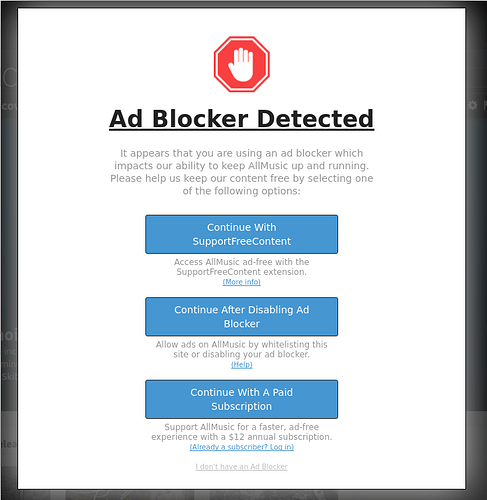 Seems to me they’re going to struggle to survive without content licensing fees.

Allmusic.com is a site I visit regularly - especially on Fridays.

I’ve been curious how my browsing experience would change if I used an ad-blocker.

Any idea what that SupportFreeContent plugin does (other than make AMG work with adblocker)?

no, sorry: I’m on Mac OS and using 1Blocker

I think that since we are essentially already paying for AMG services via our payments for Roon, Roon needs to work out an arrangement with AMG to get Roon users access to AMG (as paid subscribers). Its crazy to have to pay twice for the same service.

Rovi owns All Media Network, which owns AMG, so its taking out of one pocket to feed the other.

Rovi owns All Media Network, which owns AMG, so its taking out of one pocket to feed the other.

That used to be the case but I think they’re independent now.

Yes, evand, you are correct. Rovi no longer owns All Media Network. It was purchased by Blinkx in April 2015. The world moves and changes fast.

Does my point yet stand? Since Roon uses the Allmusic API and access to the data via the Allmusic site uses the same data (both owned by Blinkx), it seems fair that one-off customers should have access to this same content. Like HBO-GO allows me to access content I’ve paid for via Dishnetwork, Allmusic should provide a login for users who have paid for content via a third party such as Roon.

I know what you mean although I do like Allmusic’s text. Tidal on the other hand, what a stinkin’ pile. I am tired of logging in and seeing the recommendations for Jihanna, Ray-Z, and all the rest. I mean who cares? Not the sort of music I need to listen to lossless, or at all.

Rejecting add blocker doesn’t necessarily mean they are going to a subscription model. It means that they are dependent on ad views for significant income and if lots of users are using ad blocker, then advertisers won’t advertise with them. Plenty of other sites besides allmusic are starting to do similar things.

Web sites cost money. If you like them and want to use them for free, maybe put an exception for allmusic in your adblocker. Otherwise, don’t complain when a site ceases to exist or goes to a subscription model. There’s no free lunch - either advertisers pay for the site, or users pay in some form.

Not sure this makes sense.

Roon is paying for the use of certain parts of the allmusic info in Roon - not a general subscription to the all music site. There’s other services and info on the allmusic site that isn’t ported to Roon.

And you can totally ignore the stuff in Tidal you aren’t interested in. I do.

There’s no free lunch - either advertisers pay for the site, or users pay in some form.

Thanks for the lesson in economics. Personally I wouldn’t really care if AMG ceased to exist. The quality of metadata is a far cry from what it used to be and the passion on which it was founded has long since disappeared along with its founders. To me it’s another example of something that was great lose its direction following acquisition. If things are as they appear to be - Rovi generates and owns the content, AMG licenses it and collects advertising and/or subscription revenue via their website, then there’s no longer a hell of a business model/ raison d’être.

I bet they will be around longer than Tidal… Writings already on the wall on that one. What does Roon do then?

Writing is on the wall for Tidal???

You don’t have to stop using adblocker, just temporarily disable it when you go to that site. It’s not too onerous if you don’t go there regularly. I’m not sure about Adblock but in Adblock plus you can add an exception for specific websites in the preference, filter area.

Personally I wouldn’t really care if AMG ceased to exist. The quality of metadata is a far cry from what it used to be and the passion on which it was founded has long since disappeared along with its founders.

This surprises me. My experience is that although AMG is a bit random in its quality - a release I send in one week will get perfect metadata (meaning all credits for all tracks, and (crucially) date and venue of recording), while some others appear to get “under-trained” staff doing the entry.

But still, most of what AMG offers me is head and shoulders above any other data source I’ve seen, for classical.