Is this “dent” going to affect anything?

I just noticed this weird indentation on the cone of my KEF Q750. It doesn’t seem like it should affect anything. I tried a bit of tape and it didn’t pop it out. I don’t hear any issues, but any thoughts? 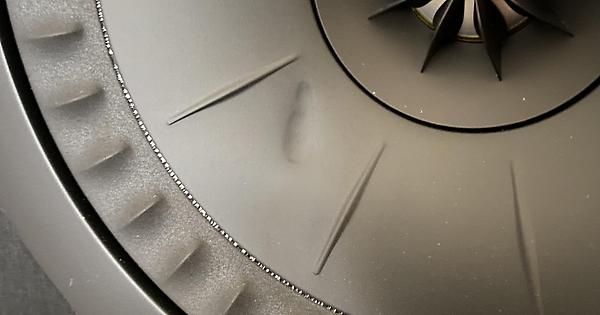 I’ve moved this to the Kef category

I’ve popped out dents in driver dust caps using a vacuum with a variable speed motor on the lowest setting with various attachments…but not the actual driver surface.
Glad my kids are older now.
I would not think this would affect performance much as long as there is no actual perforation or tear in the driver. Sorry for your misfortune and hope this is of some help.

Because of the dent, that portion of the driver is recessed away from the normal plane of the driver. Will that cause a corresponding time difference in the vibrations reaching one’s ears?

Does the dent result in less or more rigidity in that portion of the driver and how would that effect the shape of the wave of air being generated?

Can you hear the difference between different connects? If so, then maybe it will affect you.

Oh, there’s no tear or perforation at all. It’s bonkers shallow and seems like more a manufacturing defect than anything. It’s not something I did myself (and I highly doubt the cats pulled that off). I’d say it’s more slightly irritating than a misfortune.

A)
I’d hope KEF has strict enough QA to not let this slip through…
B)
I’d like to think it unlikely you didn’t detect it on first unpacking…
C)
Probably detectable with Klippel measurement equipment.
D)
Don’t hear it?
Don’t fix it!
E)
If your OCD drives you crazy, get the chassis exchanged (just joking!)

It’s pretty faint. I can absolutely see KEF or myself missing it. I also live alone and I haven’t made contact with that cone ever. It makes me wonder if maybe some sort of temperature/humidity shift didnn’t make it appear? Oh well. As far as I can tell, it’s not affecting the sound a bit, so I won’t worry. If it ever does start to sound weird, I’m sure there’s some place near I can take it to have it replaced.

EDIT: Just checked. There’s an authorized dealer/repair shop a 15 minute drive from me.