Is this indicative of a bug when running Roon on a ZFS system?

Is this normal for a linux system running ZFS or is this indicative of a bug between Roon and the ZFS format? When running this exact same hardware, but formatted in ext4, the RAM usage was ~2.5G, now it’s over 10.5G regularly. And that’s not mentioning all the identical entries here in HTOP. 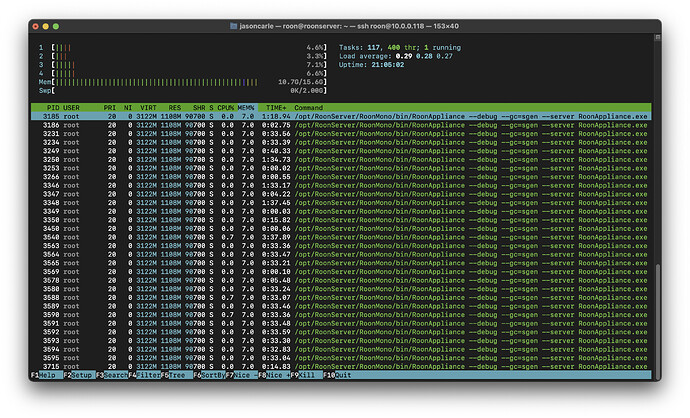 ZFS is a monster on resources… you probably don’t have enough RAM to run ZFS as the recommendation is 1GB of RAM per TB of zpool. How large is your zpool?

I did a lot of research before committing to this and what I found was that rule was not a rule at all until you get into truly massive pools. My zpool is 4TB so the 8GB minimum, plus the 1GB per TB adds 4GB and adds up to 12GB. I have 16 total in this mini. So even by that rule that’s not applicable, I have enough. There aren’t any performance slowdowns at all, in fact the thing is pretty zippy. So if this looks like normal RAM usage, then I will calm down knowing that I have two bit identical pools of my all important music that can grow as needed, is checksummed, and as safe as can be against bit rot and file degradation.

I run Proxmox with a 12TB pool on a 32GB system and even then I had to tune the filesystem to get it calm down. ROCK runs in a VM and I give it 6GB of RAM. ROCK will use all of that and stay there running fine without issue for months (well, at least as long as it takes Roon to do a release and I have to reboot).

Yeah, it sounds like you’ve got things well sorted. I mean, you paid for the RAM let the software use it right?

Only worry about it if you run into problems.