Is this the way Organized folders are supposed to work? 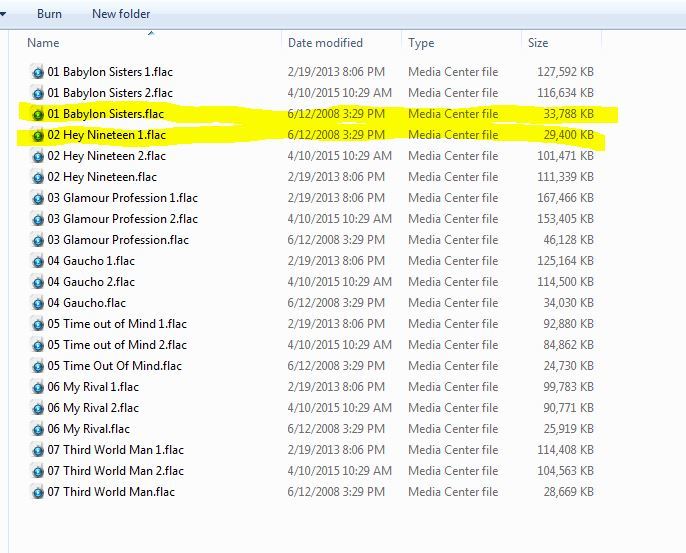 Well, first it would be a lot nicer if each version of the album was “organized” into its own folder. Instead there seems to be a 1,2,3 suffix organizing system

But what really surprised me was the way the tracks are jumbled within the 1,2,3 system. See the highlighted tracks. These are the CD tracks. For Babylon Sisters there is no suffix, for Hey Nineteen the suffix is “1”.

Now within Roon, it has somehow captured these suffix differences and all the CD tracks are associated with the CD and everything plays as it should.

But from a file management perspective, this is really scary. It would be very difficult to reconstruct the albums (if needed) if the track names are going to be jumbled like this.

Is this the way it’s supposed to work?

Well, I’m not sure if that is what it supposed to do, but, I don’t see anything wrong with what it is doing. An organized folder in Roon gives up file management to the system so that it arranges the files the best way for the system to retrieve them. I don’t use it because I like to organize my own stuff.

So, it is presenting song 1 for all three versions, then song 2, etc etc. To separate on a windows computer, hold down the Ctrl key and click on all the ones with the same suffix ending and copy to a new location and you have sorted that one version.

It works the same way in my folder and I agree: different folders with version suffix (basicly what it imported in the first place) would make more sense from our user perspective.

Well, it would be sensible if all the tracks with a suffix of “1” went together in a single version of the album. I guess I could live with that.

But that is not what is happening. See the screenshot

So you cannot sort these back to their original album versions based on the suffix numbers. And that is a bridge too far for me.

Hence, my question “Is this they way it is supposed to work?”