I’m sure it’s already been said in many post.
i don’t really get where is the AI of Valence.
i just take an example: 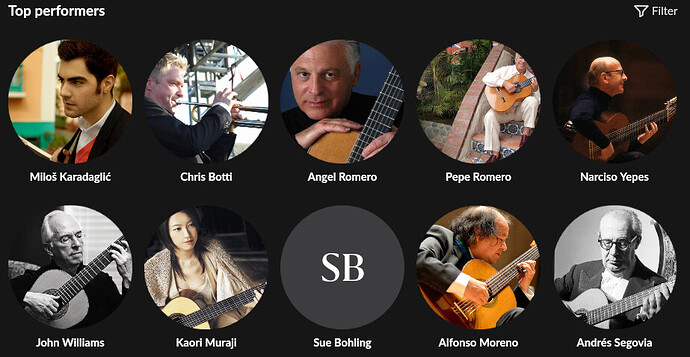 in this list, c. botti and angel romero do not play anything by rodrigo (at least in my library). sue bohling is an obscure member of london philharmonic.
while in the list are missing fundamental performers as davis russell, julian bream, paco de lucia…

in similar composers (to joaquin rodrigo):

another example. looking for wagner

image1601×655 137 KB
now in this list:
-i don’t have anything of wagner performed by furtwangler.
-nor by karl bohm
-nor by norbert balatsch
-nor by levine
-nor by hagen-groll
-nor by douglas robinson
-i have 1 small minor piece by karayan

on the other hand, valence is completely missing very important performaces by kubelik, kempe, mehta.
so, nice packet, completely useless…

Why not work on the answer yourself instead of hiring Comunity?
Here is a link to the definition of intelligence:

Intelligence has been defined in many ways: the capacity for logic, understanding, self-awareness, learning, emotional knowledge, reasoning, planning, creativity, critical thinking, and problem-solving. More generally, it can be described as the ability to perceive or infer information, and to retain it as knowledge to be applied towards adaptive behaviors within an environment or context. Intelligence is most often studied in humans but has also been observed in both non-human animals and in ...

No it is not. I would consider it only machine learning at a very early stage.

They did explain how it works with classical quite a lot in all the PR stuff. It’s not based solely on what you have or listen to or is critically accepted as the best of… It’s also based on what all Roon users who listen to classical listen to so it’s never going to match exactly to what you believe are the most important works. It will mine what it can from the data presented to it, no doubt some of this will take time to filter out the chaff and not everyone will agree with its choices and it will make some mistakes. But hopefully over time it will get better.

i didn’t say that i like or don’t like the suggestions by Valence.
i’ve said they are nor consistent with my library.

As I said its not based soley on just your library its reaching out as to what are the most popular choices overall from the Roon user community and basing these choices from that as well as other sources. Whether these are correct or not I cant judge but thats how it works. They explained this very clearly in all the PR. It is a means of discovering new things not necessarily what you already have.