if one, by mistake, launches Roon when it’s already open (hidden behind other apps)… a second instance is launched (briefly) instead of bringing to the front the already open one (which would be the standard behaviour of Mac applications)

can you, please, fix this?

What kind of Mac do you use? Because when I do the same thing on my iMac27 (late 2012) or my MacBook Pro (late 2013) Roon always just unhides the window again. No second launch…

MBP as control of Roon Server running on a Mac mini

That’s strange! Maybe other users have some ideas…

@HWZ it seems that @pl_svn is launching Roon from Applications or Spotlight or Launchpad again.

I see the same behaviour but never encounter it as I leave Roon docked and have always used the docked icon as a way to launch the application. The issue doesn’t happen in that scenario.

@pl_svn you don’t dock your favorite apps for quick access?

I use Spotlight to launch apps exclusively, so I’m sure I’ve done this (launched Roon when it’s already open), but never noticed the double-launching because I keep my dock hidden (see Spotlight comment; I never use the dock). Interesting.

Likely has to do with that the Roon app isn’t a fully native (probably the wrong term) Mac app. Notice how it sort of runs in the container of the window, not fully integrated into the OS like Chrome or the like.

I don’t see this behaviour even if I launch Roon from Applications. No “double-launching” here.

With Roon running and minimized and I click on Roon in Applications I see a new Roon instance bounce a couple times in the dock and then disappear. The existing instance doesn’t come forward.

When I do the same, nothing happens. No bouncing icon in the dock. But the minimized Roon window doesn’t come forward, either.

@pl_svn you don’t dock your favorite apps for quick access?

yes but Roon is not among those (… sorry

)
I open Roon from the Launchpad

yes but Roon is not among those (… sorry

No Roon support for you!

it is docked on my iPad

Check out what just happened to me… Two active separate Roon instances, not just temporary ones that show in the dock and go away. 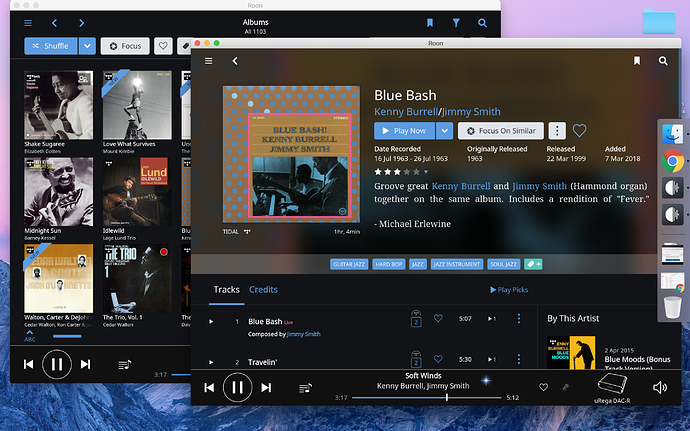 I can quit one, then launch Roon again and have two again. However, once I quit both, I could not get this to happen again - just the temporary two instances as the OP.

Running Mac 10.13.13 and Roon 1.4 (Build 306), i.e. the latest of both. Not exactly sure when or under what other conditions this originally occurred. I’ve been using my computer on and off all day, but just noticed this.