Just experienced this problem with the soundtrack to Baby Driver. There are about 30 tracks from the album available to play in Tidal, but only 4 that are marked as available in Roon.

I am currently on a trial of Roon and deciding if I want to subscribe. I like a lot of other things about the software, but if this is a wide spread problem and a lot of my music from Tidal is not playable then that may be a deal breaker.

It is also disconcerting that both Tidal and Roon have been aware of the problem for two years and it still has not been fixed. Makes me hesitant to subscribe or recommend Roon to the rest of my family.

This sort of thing is usually as a result of the Labels changing the right to stream. I’ve just looked at the Baby Driver soundtrack in Roon (I subscribe to Qobuz), and indeed, most tracks are now marked as unavailable.

When I use the Qobuz app to play the album, these same tracks only play for 30 seconds. The only way to get the full album now (as a result of Columbia changing the rights) is to buy the album.

I expect that it you use the Tidal app to play the track, you see the same - only 30 second long “preview” tracks are available for those tracks now marked as unavailable

That doesn’t appear to be what is happening for me. I just checked multiple tracks on the album and I was able to listen to the whole song in Tidal.

I am in Canada, not the US. Is it possible that Roon is basing availability on a different region than the one I am actually in?

Ok. I’m in the Netherlands, so a different region again. If you are able to hear complete tracks in Tidal, then this sounds like something @support could take a look at (I.e. the Baby Driver Soundtrack album).

After a few days of use, so far this is the only album that I have encountered the problem on, which is good.

After a week of trying out Audirvana I was a little on edge. I encountered a lot of little bugs and interface inconsistencies with Audirvana, although it did sound good when it worked. When I encountered this problem I was worried things were going to be similar in Roon, but after a few days of use I am happy to say that is not the case.

I will probably contact support about this when I have time, but as long as it is just this album in my collection it is not a pressing issue.

Can you share a screenshot of this album in the TIDAL web player?

On my US region account, I can confirm that many tracks are unavailable both on the Web Player and in the data we receive from TIDAL in Roon. Looking at the data we are receiving from TIDAL, the Canada region also has these tracks as unavailable.

That is strange. I just checked and it is still available to me on my phone and in the web player. I am able to play full songs also. It might be that the license change is not reflected on my account yet for some reason.

I am including screenshots of both. If you need anything else let me know. 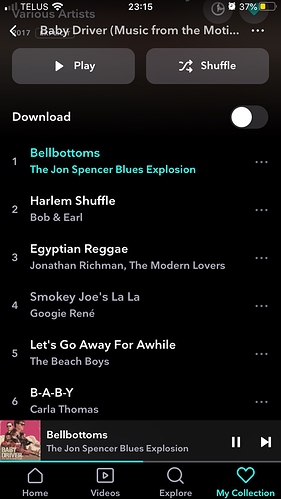 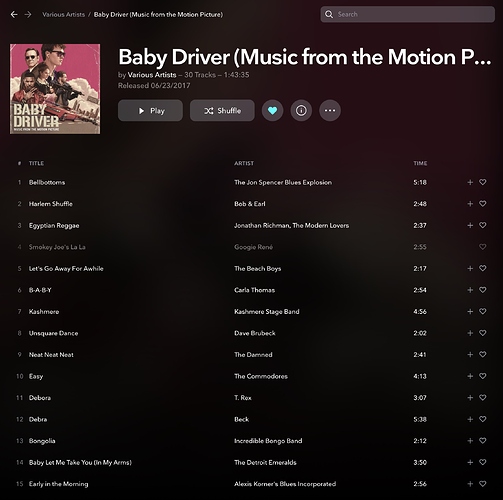 It looks like Smokey Joe's La La is not available in the TIDAL app, but the others are appearing as available. It’s possible that there was a recent change in the availability of certain tracks that just have not updated in Roon yet. I’ll pass this along to the team to look into.