Issues with ALBUM and TALB Tag

If you go to the album, hit edit, edit album, you should be able to choose the title there.

Hi there,
thanks for the fast response. customer has more then 1000 albums with his special Album title.
So he’ll prefer a way roon just take the album name from the id3tag instead doing something magic and get the album title from the internet. specially when by the import settings all is set to use file-infos.

Were these imported before or after the import setting in Settings > Library > Import Settings was set?

One option is you use Shift+Right-Click and select all of the albums at once and choose edit. From there you can go to Metadata Preference and select Prefer File for them all at once.

Hi Dylan,
thanks for your answer.
I’ve tried both for the customer.
-Edit the albums
-Removed Library, Share, cleaned DB and readded/imported his Library
With both methods, the album title (and also some cover-arts/folder.jpg) get ignored.

nevertheless the album name is changing to Best Of Rondo Veneziano, Vol. 1

No, it’s actually (Best Of Rondo Veneziano, Vol. 1) and the CD 338 is missing. So it’s unlikely a metadata database match (because of the parenthesis).

In the file system we have (as from the screenshot):
Rondo Veneziano/CD 338/01 Rondo Veneziano -the rest can’t be seen but might be important

Maybe @support can tell if this behavior might come from one of the diverse Album Version Settings.
How are these settings at the customers site? Does something change, if they are all set to no? 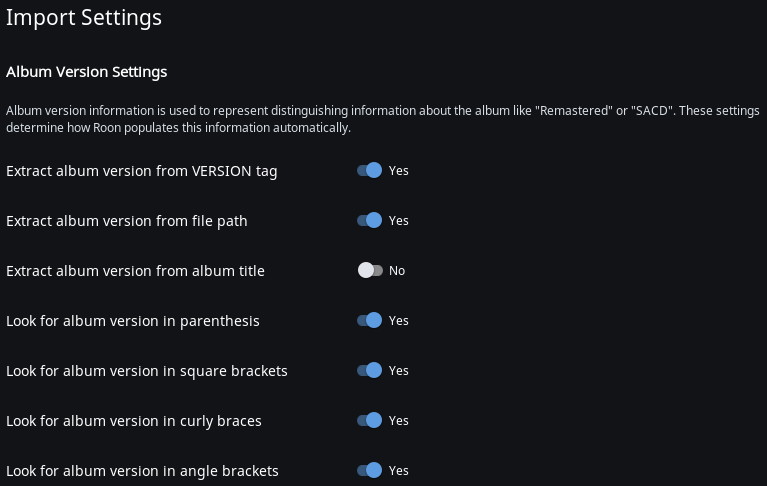 Can the missing information CD 338 maybe be seen in the Album Browser?

I think that Version information which is usually pulled from the paranthesis, ignore certain numeric values.

Maybe – but irrelevant here because the missing string part 'CD 338 ’ is not in parenthesis.

For some of the settings we can make highly educated guesses, for others it remains rather unclear what they actually do. The Roon Knowledge Base lacks a proper explanation of the diverse settings.