Issues with files appearing to be corrupt, hearing pops

I’ve had a few issues with files appearing to be corrupt. Hearing pop, replaying, same.
Playing a different album (Hires FLAC of Mark Knopfler from hdtracks.com).
That one sounded corrupted as well.
I’ve rebooted Roon core (ROCK running on NUC, music on internal SSD), then the second album started to play properly.
Tried the first album (the one sounding corrupted), played fine as well.
All versions are latest.

Hi @Michael_Borodiansky ---- Thank you for the report and sharing your feedback with us. Both are very appreciated!

Moving forward, have you tried working with the mentioned content outside of the application since noticing this “popping” behavior? I am just curious how the media responds to other applications.

Furthermore, can you please expand on the description of your setup using this link as a guide. More specifically I would like to have a better understanding of the endpoint that was used when you made the above observation(s).

These files played quite well before on the same setup.
They also played well in Audirvana Plus.

The noise was more like a bit of a scratch, not a pop. The album was purchased from hdtracks.com:
http://www.hdtracks.com/privateering?___store=default&nosto=nosto-page-search1

The second album was also from there:
http://www.hdtracks.com/sailing-to-philadelphia?___store=default&nosto=nosto-page-product1

I’ve replayed the same track from the Privateering, and the same spot would sound scratchy.
After rebooting the Roon Core (Red button on the top - reboot), I’ve played the albums, they appeared to sound normal.
I’ve looked at the Roon logs, and saw complaint about corrupted files.
I’ve also experienced (slightly before and certainly at that time) the case where Roon would just skip the song.
The ffmpeg version was 3.3. I’ve replaced it after submitting the report with 3.4.

Update: Just updated to the latest version of the software:
Roon Version 1.3 (build 274)

Many thanks in advance,
Michael

Thanks for touching base with me @Michael_Borodiansky, I appreciate you taking the time to provide the requested feedback

Moving forward, I would like to have our techs take a closer look into this behavior you are experiencing and would kindly like to ask you to provide the following materials to help aide in their investigation. Please see below.

Please find attached the screenshots of the audio path (together with the song names from the two albums in hdtracks.com)
The album was purchased from hdtracks.com:
http://www.hdtracks.com/privateering?___store=default&nosto=nosto-page-search11

The second album was also from there:
http://www.hdtracks.com/sailing-to-philadelphia?___store=default&nosto=nosto-page-product11

I am sorry, but I’m unable to share the tracks themselves

The microRendu is connected to Chord 2Qute DAC.
Please note that after the reboot the songs play without distortion so far.
My apologies for incorrectly describing the distortion sound:
It is more of a scratchy sound (fairly short) than pop. But close enough to it. 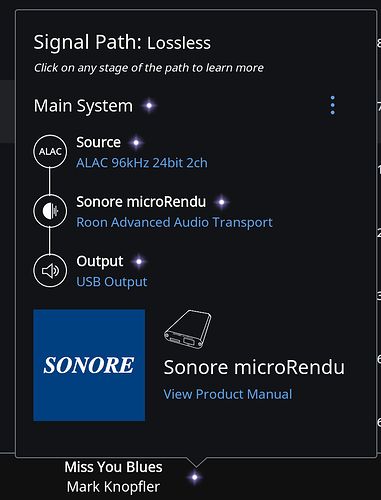 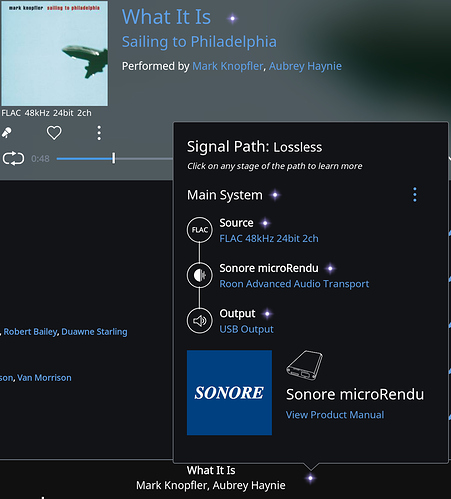 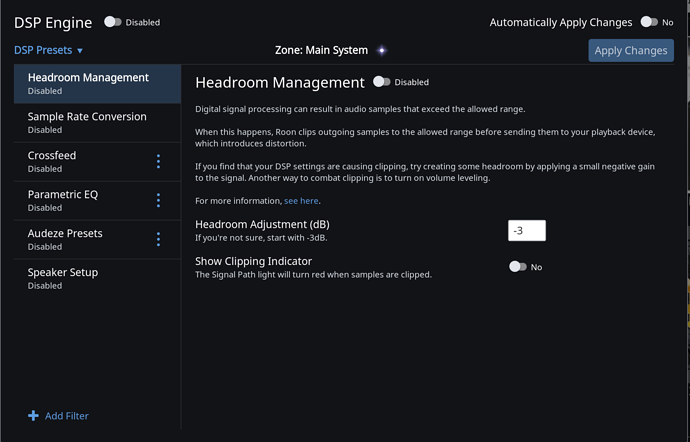 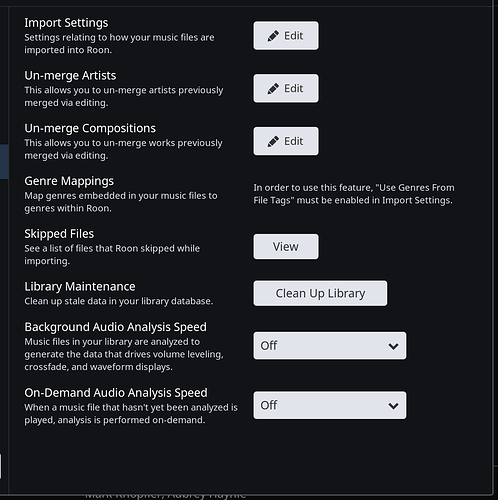 The album that caused most of the distortion was in ALAC 96Khz/24-bit.
Not sure if that helps.