It takes hours for Roon to show new albums :-/

(see this has been reported before, though… )

Do they show of you run “Force rescan” from settings/storage?

If so then this is a known issue (NAS not supporting realtime updates in some setups) and the team are looking at it.

haven’t tried force rescan yet (both fearing it would rescan everything from scratch and 'cause of threads, here, reporting it as ineffective)

also… I’m pointing Roon at my “music” share which contains subfolders by file format so… ?

I remember A+ developer saying there’s no way to trigger automatic refreshes if files are on a network device. maybe just a Mac OS issue? :unknown:

I’ve found that Force Rescan has limited success. The one solution that has worked for me 100% of the time is to kill the Roon Server service and then restart it. All new albums are found on startup.

I’m already used, with A+, at performing a manual scan every time I add new albums so… is this what I have to do in Roon too? and how: using Force Rescan?

I should have added a second sure fire solution - patience. I find that if you’re really patient and not in a serious rush to listen to a new album, then it will eventually show up. Sometimes that can take a day, sometime a couple of hours. But you must listen right now, then kill Roon Server and restart it.

just checked once more and… it is showing now

Are you connected to your NAS via SMB? 10.11.5 has serious throughput issues with SMB. There are other threads which tell you how to fix this issue.

ok, I now have Roon pointing to each one of my NAS “music” share subfolders, instead of just to “music”

unless it’s just been a fluke

just realized something “weird” is happening now: new albums I add do show in Roon within minutes (if not seconds) but… with only the first two or three tracks

Am pretty sure this is down to how network devices broadcast (or not) file changes.

Using my Synology 1813+ I have to “force rescan” on a watch folder to get changes/additions to show up in the library.

Depending on how large the watched folder is, it can take a few seconds to a minute or two.

Team Roon are aware of this scenario.

force rescan actually is an hit and miss, whilst quit/relaunch Roon always does it
(the latter not being the best option with Roon running on an headless computer

even though an “automagical” solution would be a godsend, I could also happily live with a working “Refresh Now” button

I have edited tags and tracks on maybe 1500-2000 albums in order to get perfect Roon match. When using folders on the same machine as roon/roonserver then the folder monitoring is “automagical”. This works really well as additions, deletions and edits are real-time and make the whole process ‘almost’ fun.

When real-time watching doesn’t work (typically across network devices, but, some devices seem to be OK with it…no idea why) then it does become a lot ‘less fun’

Mac mini with minimal SSD, just OS and Roon running and all my music on a NAS

auto-synch never worked with A+ either, but “refresh now” always did

What is A+ ? Amarra ? If so then no surprise as it is more related to the function of the OS on the NAS rather than any app. If the NAS isn’t reporting SMB changes properly then all apps will have trouble.

Damien, the developer, always stated changes on a NAS (sub)folder do not reliably get notified to the OS so auto synch is disabled (and user can’t enable it) in this scenario
maybe just a Mac OS issue (Audirvana is Mac only)

though the “(re)Scan Now” button always works without a glitch: new albums do show up as soon as user clicks it

I’m pretty sure that “Force Rescan” in storage settings is the same thing as you describe.

This is different to “Rescan Album” in album edit. 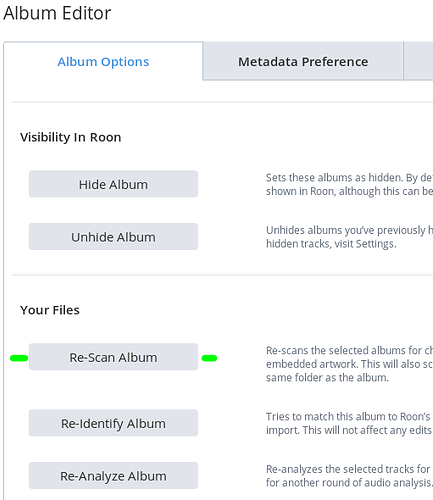 Force rescan is the one to use for most external NAS changes that are not picked up real-time. Easier than restarting Roon as that invokes ALL folders and you may not want to do that just for a change in a single folder.

yup: can’t swear on it, but I’m pretty sure Force Rescan is what I used

nonetheless the “blue spinning arrow” (right-ish top corner in album view) only appeared for a very short while, as opposed to when you launch Roon and the re-scan takes at least a minute (10 watched folders, 20.000+ files)