Mac Mini 2018 Catalina, all software up to date

Speaker and Mac connected via Ethernet Cable to Fritz Box 4040

Hello, I am aware that there are several posts with a similar topic, but it seems nobody has my exact problem:

Upsampling works reliably in this constellation. But when I skip a song and listen to the next one 2 out of 3 times playback stops after 2 seconds for several seconds (as if it was buffering!) afterwards it plays the song without interruption. It works when I listen to a complete album, no interruptions.

Anybody else got this problem? I have a fast internet connection, so I don’t suppose it is waiting for the tidal files to load. I listen to few flacs on my harddisc, but so far it seems the problem only occurs when streaming via Tidal. 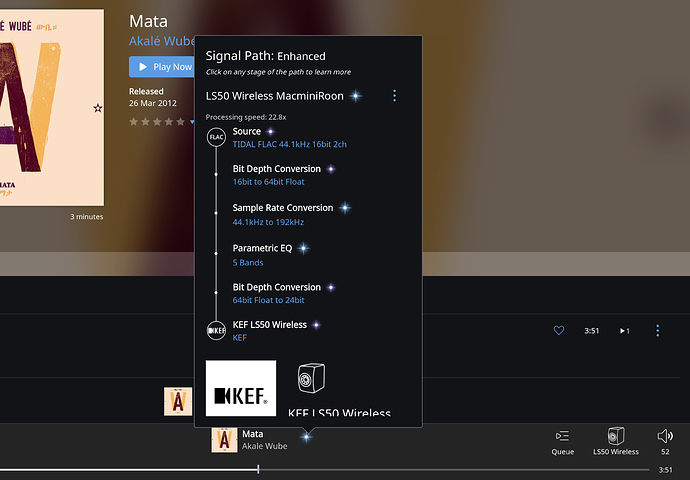 LS50 can only playback 192 via USB interface, if your using a Ethernet connection then 96 is your highest rate, even if you up sample, 96 is the highest. I think.

LS50 can only playback 192 via USB interface, if your using a Ethernet connection then 96 is your highest rate, even if you up sample, 96 is the highest. I think.

Only the Optical input is restricted to 96/24 maximum.

Maybe you are thinking of the Kef LSX?

I own a pair also. I Was just going by their literature. I thought I read that they down sample to what they can handle on certain inputs.

Was just going by their literature.

Hmm… I would like to see that literature if you’ve got a link.

I Was just going by their literature.

Actually… looking at their literature… they do state that USB is max 192/24, and Optical Toslink is 96/24 as I mentioned… but… they don’t actually state a spec for Ethernet/Dual Wireless 2.4 GHz/5GHz Wi-Fi.

However… as I’m sure you’ve noticed… Roon’s signal path shows that it delivers 192/24 to them when you play to them via Ethernet (wired or wireless). So it’s my understanding that that’s what they receive.

I’m at work right now but I agree with your statement above. That’s what I was referring to on their website.

So you finally found out that they take the signal as described.

Really, nobody has the above mentioned issue?
Most of the time it happens when skipping songs, and is really annoying!

Thanks for your help!!

Thank you for your report here. We are aware of a few similar reports regarding this behavior and have reached out to KEF regarding this. In the meantime, I would verify that your LS50s are on the newest firmware available.

The issue was resolved with the new Roon update.

Glad to hear that the new update helped with this issue!