I currently have stream content from my roon nucleus through a wired HDMI connection to my Kef LS50 wireless i speakers. I was thinking of upgrading to the Kef wireless ii speakers, due to the improvements in functionality and audio quality, but am a little unclear how it will affect how I currently stream my music content.

Thanks so much for your help!

Do you mean USB?

Yep that is correct. It is the direct wired option supported from the nucleus to the speaker. Can this option still work on the wireless ii’s though? I’ve been reading over the community posts and can’t find anything conclusive. It appears that since they are not roon tested and still being ready to be roon ready that this option might not work. Is that right?
I like the setup and playlists and all I have on my nucleus and would rather not turn it into a paperweight and then have to rebuild all that content on something else if I can avoid it.

Ok, so… Firstly, the speakers, either Mark 1 or Mark 2 are an ‘endpoint’ , they do not become a core once certified Roon ready.

You will still need a core, in this case, your nucleus.

Secondly, the Roon approved best connection method for optimum sound quality is to have the core and endpoint separated via wired or wireless ethernet.

You have your speakers directly connected to your core, via USB.

Have you tried connecting via ethernet?

It is the direct wired option supported from the nucleus to the speaker. Can this option still work on the wireless ii’s though?

You’ve got a few options… firstly… if you want to have the wireless II’s hard wired to your Nucleus, you would have to use the HDMI output of your Nucleus, rather than the USB output. The Wireless IIs have no USB, instead they have HDMI.

The approved method from Roon though, once the Wireless II’s are certified, would be to connect the Kefs to the same router as the Nucleus is connected, either via hard-wired Ethernet or Wireless Ethernet.

The Kefs, when connected to the same network, will pop up as and endpoint you can use with Roon.

The current Kefs you own, already show up this way, you don’t have to connect them directly to your Nucleus via USB.

Have you connected your LS50W to your home network?

Thanks for the responses! I had to recheck and I did also connect them directly via ethernet also. When I stream I use the PC setting on the speaker which allows me to stream at 192hrz. Should I be using a different setting?

I can stream at 192/24 to mine via ethernet, or even Wi-Fi. I have heard on these forums from other LS50WI users that they can’t stream from Roon any higher than 96/24, that seems to be a problem with some Kef LS50W speakers, I am not affected, luckily, mine work fine.

There is some school of thought on this forum that for the best sound quality, it’s best to keep your endpoint (Your Kef’s built in streamer in your case) separate from your core. The reason for this is some people think that electrical noise from the core (Which is basically a computer) can be passed along a USB cable to the DAC and this noise can get into the analogue circuits within the DAC.

You have a Nucleus, which is a very low noise, well designed, purpose built computer, so it is debatable whether you’ll actually be able to hear any noise. I won’t get into that debate!

So… you’re currently using your Kef’s as a DAC connected directly to your Nucleus, but… the Kef’s have a built in streamer, so you could use them via ethernet instead, in which case you are using them as a Roon approved Endpoint, which means the Kef’s are now receiving packets of audio data from the network and converting them to useable audio before supplying their DAC. Some say this is more immune to noise, and therefore better.

Anyway… that’s a very long-winded way of me saying, just try them on the ethernet input and see if you can hear a difference.

Oh no! it appears that I have the mk i’s with that wifi streaming issue. When I stream at 192kHz through wifi I just get garbled popping sounds. That was part of my confusion about how these speakers stream from different inputs. Thanks so much for all the very helpful info! It was all very informative and has given me much food for thought. I am very less concerned about the mk ii’s and I have already reached out to Kef about my issue with my mk i’s. I should have come here months ago!

Sorry to hear about your streaming issues, that’s unfortunate. You could still stream to your Kef’s via Wi-Fi if you set up Roon to Down-Convert any resolution higher than 96/24 to 96/24. You can do it by clicking on the Speaker symbol bottom right, then Cogs,

Then ‘Device Setup’, then ‘Show Advanced’, You should get this page - 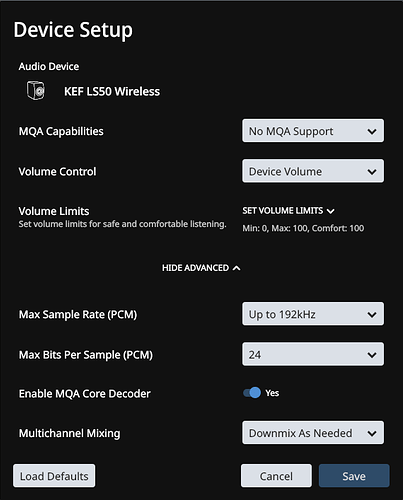 Personally… I defy anyone to hear the difference between 96KHz and 192KHz on LS50W anyway… but that’s the subject for a long and boring discussion!!!

If you do end up going for the Wireless IIs, I would wait until they’ve got official Roon Certification, otherwise, you’re stuck with Chromecast wirelessly, or hard-wired HDMI, and some users are reporting problems with the HDMI not being recognised by their TVs that they are connecting to.

Whether the HDMI output of Nucleus properly handshakes with them is anyone’s guess. Maybe someone on here that has tried them from Nucleus via HDMI could comment, although that user is probably quite rare so far!

While I wait for Roon certification, I have my LS50Wiis connected via Ethernet wall input on the same network as my Nucleus. Getting rock-solid 24/192, though I don’t know if that’s because of the Ethernet connection only or because I also use the speaker Ethernet interconnection cable. In other words, I haven’t tried to see if I’d still get 24/192 in the absence of the interconnection cable.

How have you connected roon with the ls50w II? airplay or chromecast?

Not connected with Roon yet - I’m using the native KEF app in the meantime. Giving up some convenience in exchange for full 24/192. Soon enough.