I just demo’ed a pair of LS50 Wireless and they sound fantastic - the active amplification does wonders for the bass, particularly in my difficult/lively room. The controls/app are finicky so here’s hoping the Roon solution is solid! One other issue is that there is no way to swap left and right channels - all of my gear is on the left of my room and it would good to be able to plug it into the left speaker. Does Roon have any way to switch channels??

You should be able to achieve this by DSP Engine > Procedural EQ > Mix > swapping the output channels: 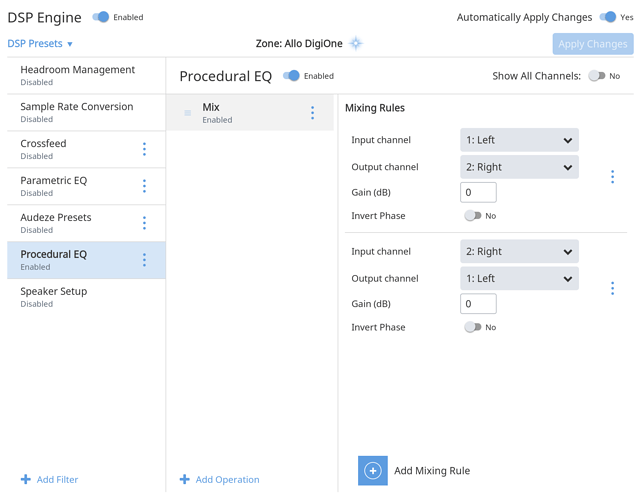 I have mixed feelings about this product. Makes as much sense to me to buy something like this from KEF as it would to buy speakers from Roon. I don’t have high expectations of software, integrated hardware or support from KEF.

That’s a logical conclusion after reading the experiences of a lot of us.
Kef released the firmware and especially the app in a barley functional state to bring in the $$$'s and they knew it was a mess.
They have improved the software and the app but further improvement is needed especially in general usability.
I’m betting they cheaped out using contract developers from who knows where.
The result is a bunch of reviews talking about the great sound from these speakers but terrible usability and not so great support.
Kef clearly was not ready for such a product and they really need to step it up.
Mine are in for warranty repair and i do miss them but am not sure if I should sell them since I bet the replacements will have only four months warranty left.
.

I love my KEF LS50W. I think they sound great. I never use the app so the app functionality is not an issue for me. I use them with an ultraRendu and never switch inputs so the input switching is not an issue for me. They are significantly better than the KEF X300A they replaced. Just depends on how you use them as to how happy you can be. I just love how musical they are. They have been working flawlessly for me since the day I installed them. I have had them since March of this year. YMMV.

Using them minimally as you do is probably the key to happiness with them.
I use the optical to TV and USB for Roon. Sometimes Roon to the Apple TV connected to my TV but USB sounds quite a bit better.
Because of Roon I have no use or reason to use the app either. I’m not a long time Roon user but am pretty thrilled with it. That doesn’t mean it is acceptable how long it took them to get the app somewhat working.
The direct integration to Roon is going to be great although I will still need to manually switch inputs. Not a huge deal but it still rankles a little because so many other devices do this automatically.
I’m going to have to check my insurance to see if there is a way to attach them to it because if mine die again I’m sure it is not a cheap fix. Assuming they even repair them. I was just reaching a reasonable level of comport after 8 months with these speakers and multiple updates when the right one died.

The app sucks. I never use it. I even replaced the remote, as my Logitech universal remote works with the LS50w.

Before getting my Sonore ultraRendu, Sonic Transporter set up…I had trouble streaming Tidal to the LS50w, the Kef support was nothing short of stellar. Kudos to Mike at Kef.

Like John Aiello, I have an ultraRendu feeding the LS50w…with pretty ‘awesome’ results.

I’m familiar with all the value arguments.
I’m also using a Logitech Harmony.
Many of us have had no replies from Kef support or only partial replies.

Aha! I didn’t check Procedural EQ. Thanks for that.

I’m going to have to check my insurance to see if there is a way to attach them to it because if mine die again I’m sure it is not a cheap fix.

One other thing as well - if you bought these w/ a CC they’re most likely covered for a second year.

I completely forgot about that and I did use a CC that adds a year warranty.

As the Kef LS50’s have broken in , they are quite phenomenal for a little over 2 K!

They did take a while to break in . They really sounded ok out of the box but 100’s of hours later they are much much better.

So this CEDIA show report describes the Kef Roon setup at Cedia;
Scroll down to the Kef section for details.

But even more interesting…
ELAC showed their wireless speakers that do Spotify, Airplay, Bluetooth (bleh) and Roon!
Not too sure I like a single box solution instead of separates but still very interesting 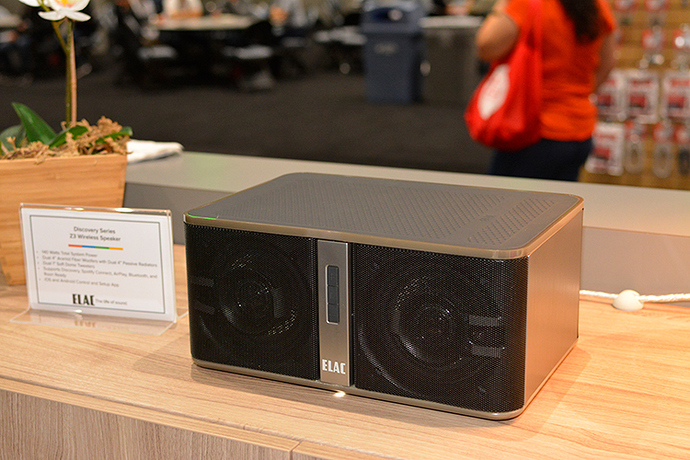 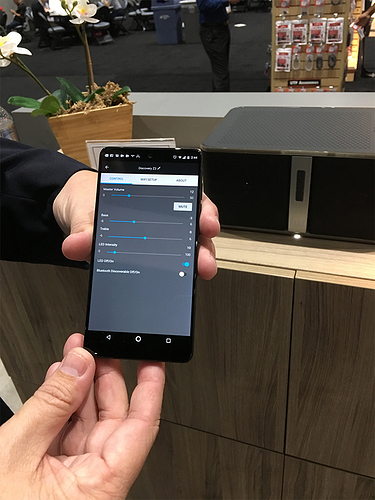 I hear a lot of people use things like microRendu and connects to these speakers with USB, but isn’t WiFi best to use? That makes them totally isolated from voltage jitter and noice from the Roon host, and should (at least in theory) result in best SQ. No need for USB cleaners etc, or expensive cables.

Second best would be to use an Ethernet cable, which provides a more stable bandwidth but makes them less isolated.

Or am I missing something?

Ethernet would be best because it has built-in error correction and no need to translate from one format to another plus stability due to more consistent speed.

People are using a microRendu because there is currently no way to get Roon to the speakers via wifi or ethernet.

Yea, but assuming that will be fixed, what will be the best connection from a pure sound quality perspective?

Ethernet for error correction and consistency and stability.

That is a deeply religious question. There are people on this site that think that wifi is just as good as ethernet. I am not one of them. I agree with DarwinOSX that ethernet is the way to go. After all at this level music is data. The more robust the connection the better.

Ethernet vs wifi is not going to impact error correction at the level of the music data. At least with RAAT, the underlying data is now sent over TCP (since a recent build), and UDP as a backup. If any packets are dropped or corrupted they get corrected at the TCP transport layer. Under normal circumstances, the endpoint will get the exact same digital copy of data.

Ethernet and wifi protocols (and other physical protocols like ATM and frame relay) are at a lower layer and have their own mechanisms for handling errors. What these differences will impact are latency and throughput, which ultimately could affect SQ. Ethernet will generally be more reliable, but if a wifi network is set up properly and is high performing, one should hear no difference in practice.

In fact, as @Magnus says, there might be better SQ via wifi because it’s electrically isolated. I am very interested to see if people report any differences between their USB, ethernet, and wifi connections to the LS50W once Roon is updated with ethernet/wifi support.