I just set up a pair of KEF LS50w and I’m having issues with stuttering playback on 24/192 files and DSD files converted to PCM. Anything up to 96 is fine. If I limit playback to a max sample rate of 96 the downsampled 192 files play fine. I’m running a mac laptop with latest software and a connected hard drive. I also updated the KEF firmware. I don’t see this issue anywhere else on the forum so not sure where the issue is.

What is the processing speed? If you click on the ‘star’ at the bottom of the screen just to the right of the track name when playing a track, sounds like your cpu maybe struggling with upsampling, anything 1 or less is problematic. 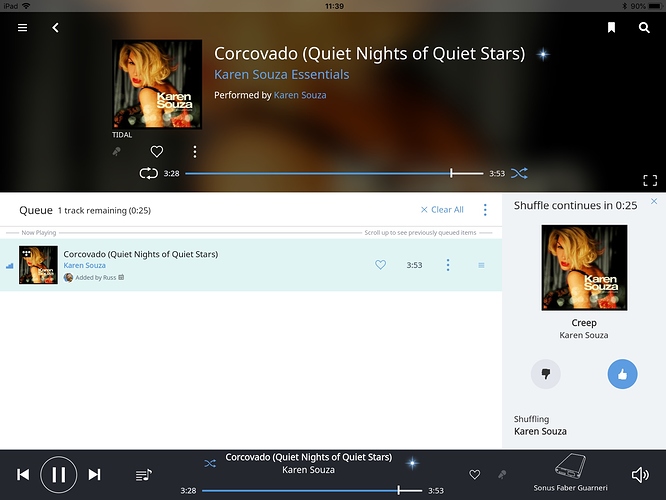 Thanks for the response. I have tested another room endpoint, NAD with the Bluesound module and had no issues so I’m thinking it’s KEF related.

How are the Kefs connected to your router? Ethernet wired or Wi-Fi?

They’re set up as wi-fi

Then… I read that it may be beneficial to electrically isolate any DAC from the router so I tried wi-fi between router and Kefs again, but I changed my router config to broadcast on 5MHz, rather than 2.4MHz which it was previously on.

Then… I realised my wireless printer didn’t support 5GHz, so… I did a scan of wireless networks in my neighbourhood to try and find a wireless channel that wasn’t being used by my neighbours and ended up using Channel 8, back on 2.4GHz again.

So… I would recommend using a wired link between your core and router first… Try that and see if it works.

If it doesn’t, and you can use the 5GHz setting on your router… try that.

It’s always worth checking your router is on a different wireless channel than your neighbours to avoid interference as well. I use software called iStumbler on my Mac for this.

FYI Alan… I’ve just tried disconnecting the Cat5 from my MacBook and went back to Wi-Fi and the stuttering is back, so it looks like my Router can’t cope with 2-way traffic at 192KHz 24bit over Wi-Fi.

If that’s how you’ve got yours connected, I reckon that’ll be the problem.

You’ll probably have to shut down and re-start your Roon Core software when changing from Wi-Fi to wired, by the way.

Thanks Dan. I solved it. Even though I’m showing full Wi-Fi signal strength throughout the house and streaming movies throughout I added a Wi-Fi extender in the room with the Kef’s. I put it on the 5GHz channel and connected my Mac to the extended network. Problem solved! Maybe this can help you out as well.

Good to hear Alan. Glad you got it sorted.